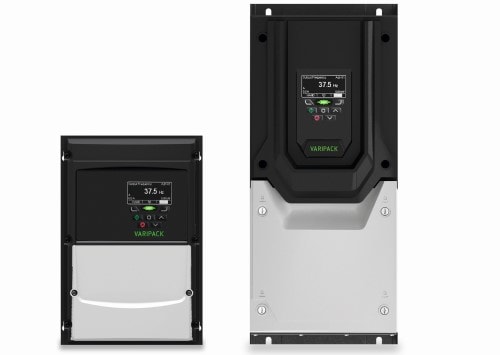 The enhanced Varipack versions have uprated IP55 and IP66 designations, enabling the units to be mounted either inside the switch cabinet (IP20) or outside, thanks to their more protective enclosure, giving installers flexibility on site.

Varipack frequency inverters are designed for safe and easy capacity control and have been specially adapted for refrigeration and for the operation of BITZER compressors. They open up a wide range of applications in supermarkets, hotels and restaurants as well as food manufacturing and processing.

Varipack is suitable for refrigeration and air conditioning systems as well as heat pumps and can be combined with single compressors and compound systems alike. After intuitive commissioning, the frequency inverters take over the control functions of the refrigeration system.

The compressor’s capacity can either be controlled depending on an externally set signal or on the evaporation temperature with an optionally available pressure control add-on module. In addition to direct control of the evaporation temperature, the speed of the condenser fan can be set via a 0–10 V output signal and a second compressor can be switched on. With regard to pressure control, the frequency inverters have a database of all commonly used refrigerants for ease of configuration and monitoring.

BITZER software can be used to select a frequency inverter for specific applications and BEST software (BITZER Electronics Service Tool) can be used for easy commissioning and monitoring.

The Varipack inverters ensure that, when operating in field-weakening mode, the maximum frequency is automatically limited depending on the load. Optimised adjustment to suit the system’s current cooling demand is said to reduce energy consumption, increase efficiency and lower running costs.