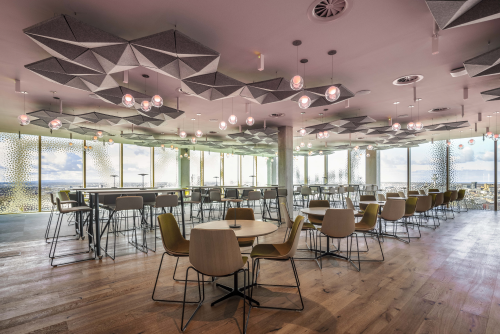 Waterloo has provided air distribution for the new northern home of the Royal College of Physicians (RCP) in Liverpool, described as one of the world's healthiest buildings.

The Spine, a £35m building in the city's Knowledge Quarter, has been designed by AHR to meet the international WELL Building Standard. The building is the gateway to KQ Liverpool’s Paddington Village site, a new health, technology and science community developed by Liverpool City Council that has brought together many influential organisations and revitalised this corner of the city centre.

Through workshop sessions with the design team, the CS-F Linear Slot Diffuser was chosen as a consistent visual approach for most of the building. A key advantage of the CS-F is that it could be carefully adapted to suit the various feature ceiling types and the plank tile ceiling systems designed for the new building by SAS International.

Other Waterloo products included in the air distribution design plans were Swirl Diffusers and Airline Linear Grilles, all of which were selected and finished to suit the interior design .

Waterloo and BDP’s expert input helped to secure the contract and in November 2020 work began on site on the mechanical, electrical and plumbing installation. Waterloo has continued to work closely with the contractor team to refine product selections, maintain accurate air terminal schedules, deliver best value and ensure adherence to the BDP design intent.

“One of the most important aspects of any successful project is reliable partnerships,” said Sherlock. “At Waterloo we always strive to deliver complete personal continuity throughout the project, from concept to handover. With the WELL Building Standard as a goal, we were fully confident that our air distribution system would be of the standard required to achieve this objective.”

Designed by AHR, with regional director Robert Hopkins as the lead, The Spine takes its name from a distinctive staircase visible from the outside which is similar in form to vertebrae, and the façade is made up of 23 million individual polygons that represent human skin.

With the highest outlook of any building in Liverpool, The Spine commands stunning views across the city and beyond to Snowdonia, the Peak District, the Pennines and along the Lancashire coast.