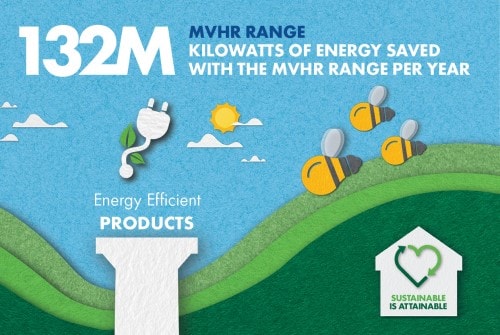 Ventilation specialist Vent-Axia is sharing its efforts to deliver healthy indoor air sustainably, which in turn is helping its own customers make sustainable attainable.

The company is committed to helping make sustainable attainable for its customers by taking action to reduce its environmental impact as part of a group wide initiative. These actions have resulted in significant improvements to help the company meet its environmental goals including eliminating plastic blister packs and single use poly bags from its supply chain; recycling 180 tonnes of cardboard; using recycled materials from 63,000 old fridges and designing efficiency and modularity into its products to lower energy usage and reduce landfill waste.

As a strategy to reduce its environmental impact, Vent-Axia has introduced its ‘3 pillars of sustainability’:

By focusing on these key areas, the company says it has bought about real measurable change in the next stage of its environmental journey. In 2016 the Vent-Axia achieved the internationally recognised ISO 14001 Environmental Management System certification for its Crawley manufacturing facilities. This followed the company completing its reshoring of the balance of its domestic fan manufacturing, from China back to the UK in 2013, a project that reduced carbon emission by 15 tonnes a year. Meanwhile, since the company’s inception in 1936 it has been leading the way in energy efficient ventilation design, with its first fan containing an energy saving DC motor, and in 2010 Vent-Axia launching its Lo-Carbon range of fans to further drive energy efficient ventilation.

“Sustainability is about finding solutions. From energy usage and climate change to air quality and future lifestyles, these are the areas where we can have the biggest positive impacts. We’re focussing on how we can improve lives through the impact of our products, our impact on the planet and our impact on our people”, said Lena Hebestreit, marketing manager at Vent-Axia. “We want to show that being sustainable is attainable, not only for us but for the wider industry. We’re on a sustainable journey towards reaching net-zero and Vent-Axia is taking real, quantifiable actions to achieve this. Vent-Axia is committed to helping all its customers on their net-zero journey including social housing and new build customers where regulation and targets are swiftly driving change - helping make sustainable attainable.”

Through its plastics initiative Vent-Axia has already stopped tonnes of plastics going to landfill each year, as well as reducing its own plastics usage. The company has achieved this by eliminating 630,000 single use plastic poly bags from its supply chain per year; by recycling 77 tonnes of plastic shrink wrap per year and will use 275,103 fewer blister pack units each year, with the latter saving nearly 10 tonnes of plastic.

However, Vent-Axia is not only reducing or recycling its use of plastic, in the past year Vent-Axia’s environmental initiatives have seen 180 tonnes of cardboard and 90 tonnes of wood (pallets) being recycled; it purchased 3.5 tonnes of recycled packing material, which led to the supplier planting 81 trees and has gone from printing 13 thousand catalogues (4.3m pages) a year in 2019 to 0 in 2020.

Vent-Axia is also designing its products to be modular to reduce plastic waste. For example, the company’s Lo-Carbon Revive fan has modular components so if a social housing provider needs to replace a fan, in many cases a new spare part could be ordered instead helping to avoid replacing the entire fan unit and so avoiding the whole unit ending up in landfill. In the last year 640 Revive fans have avoided going to landfill. Vent-Axia and its wider sister companies are also diverting 200 tonnes of PVC from landfill by ensuring 100% of its PVC ducting is made from recycled sources. The Group is also recycling the polystyrene content from old fridges to make High Impact Polystyrene (HIPS) for all rigid ducting accessories. This will save 63,000 fridges a year from going to landfill.

Energy efficiency by design is said to be the driving force behind its products. Vent-Axia’s Lo-Carbon products have been available for 12 years and by buying and installing a Lo-Carbon version rather than an alternative, there is a total energy saving of over 23 million kW over this period of time. Plus, the company has developed best in class heat recovery ventilation. For instance, Vent-Axia’s Lo-Carbon Sentinel Kinetic Advance Mechanical Ventilation with Heat Recovery (MVHR) offers up to 93 per cent heat recovery and is designed with wireless commissioning to encourage best practice and help ensure ventilation performs as designed. In total 132m kW of energy are saved with the Vent-Axia MVHR range each year.