Honeywell pledges to be carbon neutral by 2035 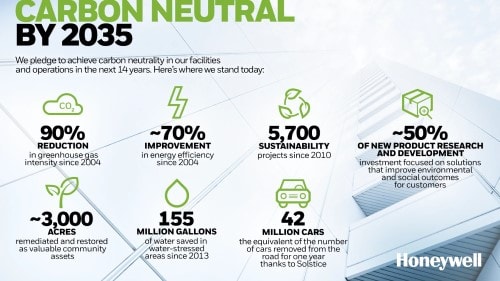 Refrigerant manufacturer Honeywell has pledged to be carbon neutral across its facilities and operations by 2035.

Chairman and CEO Darius Adamczyk said: “Honeywell has a long history of improving our own environmental and sustainability profile while providing innovative products and services that improve our customers’ profiles as well. We will continue to invest in our plants and in new technologies that will reduce our carbon footprint and contribute significantly to global efforts to mitigate climate change.”

Honeywell says it has reduced its greenhouse gas intensity by more than 90% since 2004 and aims to complete more energy savings projects, converting to renewable energy sources, completing capital improvement projects in its sites, electrifying its fleet of company vehicles and using credible carbon offsets.

Honeywell says it also wants to help other companies and customers reach carbon neutrality through its products and technologies. It says its Solstice line of low global warming potential refrigerants, propellants and solvents has avoided emission of over 200 million metric tons of carbon dioxide equivalent from being released in the atmosphere according to our estimates, equivalent to removing more than 42 million cars from the road for one year.

Recent developments have seen US company Whole Foods Market adopt Solstice N40 (R448A) in its stores as it seeks to reduce greenhouse gas emissions under the US. EPA’s GreenChill programme. Whole Foods Market will retrofit their commercial refrigeration systems at more than 100 stores with Honeywell’s reduced-GWP alternative, replacing R404A and R22.

Honeywell has also announced the first adoption for N40 in Vietnam, by the chain LotteMart. N40 was previously adopted by Lotte Mart for use in its stores in South Korea in 2018.

Universal Studios Beijing, meanwhile, is the first cold storage warehouse owner in China to implement N40 on a large scale. The new system is expected to help improve refrigeration system energy efficiency by 10-15%.

In addition, Solstice N41 (R466A) was recently recognised by the Japan Society of Refrigeration and Air Conditioning Engineers (JSRAE) as a new, inert refrigerant. This is seen as a key global milestone for Solstice N41 as it moves towards the path of commercialisation.