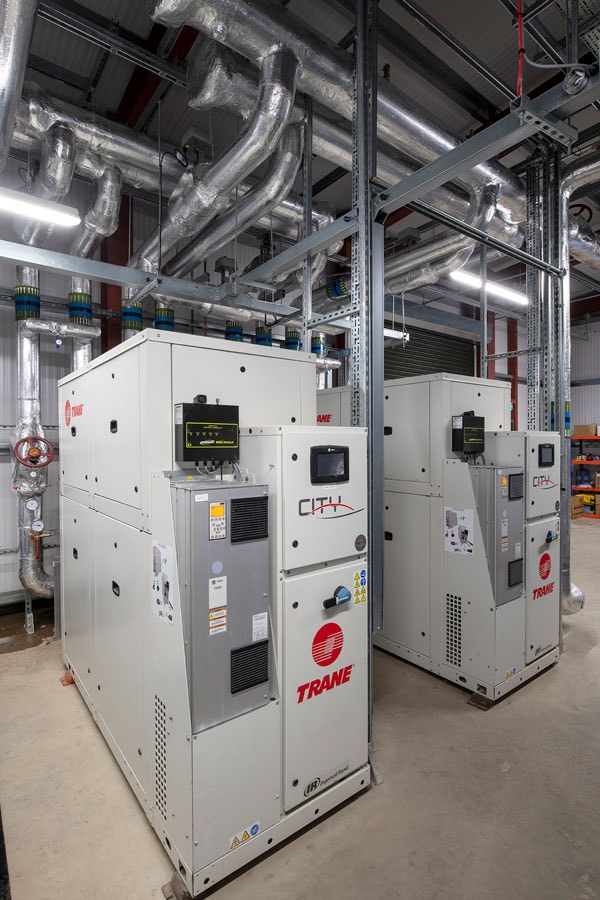 The project has the potential to save up to 381 tonnes of carbon per year, equivalent to driving 1.5 million miles in an average petrol car, and aligns with Scotland's commitment to becoming a Net Zero carbon emissions society by 2045.

The technology is said to be the first of its kind in the UK to use sewage and wastewater heat recovery technology alongside combined heat and power engine (CHP) to generate heat and electricity in a single, efficient process. Trane heat pump technology extracts heat from sewage and wastewater, and uses Honeywell’s ultra-low global warming potential (GWP) refrigerant at an energy centre owned and operated by Scottish Water Horizons to deliver low-carbon and energy cost saving heat to the district heating network.

"Trane is directly addressing climate change by changing the way the world heats and cools buildings and moves refrigerated cargo,” said José La Loggia, president of the Trane commercial HVAC business in the Europe, Middle East and Africa region. ”In Europe, buildings are responsible for 40% of energy consumption and 36% of greenhouse gas emissions, and almost half of the energy used in buildings is on heating and cooling. Innovations like our advanced heat pumps used in the Stirling project aim at bending the curve on global warming by replacing fossil fuel-based heating.”

“This is an exciting district heating project which demonstrates the direct impact that Honeywell Solstice refrigerants along with Trane Technologies can have on CO2 emissions and energy consumption,” said Julien Soulet, vice president and general manager, Honeywell Fluorine Products Europe, Middle East and Africa. “No other refrigerants available today provide the comprehensive range of advantages that Solstice products offer, including energy efficiency, negligible climate impact, ease of conversion, safety in use and low total cost of ownership.”

Energy savings to household and local businesses
The district heating network, owned and operated by Stirling Council, includes a number of key public buildings in Stirling, including the leisure centre, stadium and nearby high school. The scope of the project allows the network to expand across the city and provide energy cost savings to households and local businesses.

“The Stirling Project is a key example of how we’re supporting the Scottish Government and Scottish Water in their ambitious Net Zero Emissions targets,” said Donald MacBrayne, business development manager for Scottish Water Horizons. “Over half of the energy consumed in Scotland comes from heat, and we are dedicated to continuously utilising Scottish Water assets to generate low carbon energy, contributing to a greener Scotland. The energy centre, has been designed to allow for future development, supporting further, subsequent expansion of the low carbon network.”

Solutions like the CITY zero carbon compact cooling and heating units used in the Stirling project are an example of Trane’s innovation towards electrification of heating as a way to offset the use of fossil fuels for heating.  Trane heat pump solutions are considered a source of renewable energy since they make use of free available energy present in ambient air and groundwater sources. They achieve hot water at temperatures of up to 80Celsius by using Solstice ze (R-1234ze), an ultra-low GWP refrigerant from Honeywell.