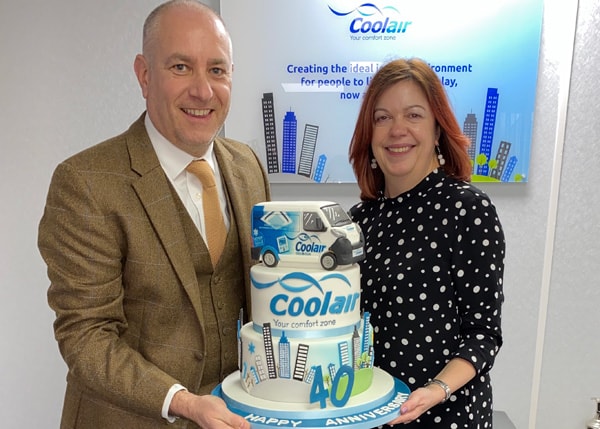 The firm, which employs more than 80 staff and installs and maintains air conditioning and heat pump systems across the UK, was established on February 13, 1980, when the UK average wage was £6,000 and a litre of petrol cost 28p.

Originally established above a terraced house on Debdale Lane in Gorton, the nationwide firm now operates out of three offices: its southern base in Maidstone, Kent, a Midlands office in Cannock and Coolair House, its headquarters in Dukinfield, Manchester.

Chairman John Otterson is the firm’s longest serving current member of staff, having joined the business in 1984.  He said: “Today’s air conditioning industry is very different to the one Coolair joined back in 1980. But we have always tried to innovate to ensure our continued success.”

One such innovation has been the way they recruit and maintain staff. Coolair actively recruits young, ambitious people with little knowledge of the industry, before training them up. Many of these workers go on to become shareholders and eventually directors.

The firm is also looking to increasingly sustainable air conditioning solutions as it enters its 40th year and actively promotes the use of renewable energy technologies in its systems.

Coolair staff will celebrate the firm’s 40th anniversary at its annual conference, which takes place in the spring. Coolair will also celebrate the landmark anniversary with a charity bike ride across South East Asia in October.

Coolair Milestones
February 13, 1980: Coolair Equipment Limited was registered at Companies House by Nick Parker. He was joined by Mike McCourts and Mandy Doherty and the trio started trading as Coolair from a corner shop on Debdale Lane in east Manchester. The first order – EQN1000 – was for ICI’s Blackley workshop.

1984: The sales team was given a boost when John Otterson joined the firm. He is still with Coolair today and is the company’s Chairman.

1985: Coolair placed its first order with Daikin. Such was the size of the order, it was shipped direct from Japan.

2006: The Manchester team moved to Coolair House Mk II – its current home.  Another significant event saw the retirement of Phil Plant, a member of the original management team. His exit helped shape a Coolair culture which can see loyal members of staff rewarded with director roles.