On Friday last week, over 30 academics and businesses attended a seminar at the School of Chemical Engineering at Birmingham University to understand how to the ERA will operate and best invest the funding. ERA is a hub for research into how to provide long term energy security, low carbon and affordable energy  for UK businesses and households.

Gordon Waddington, CEO of ERA, explained that the group is keen to fund research on storage of cold and hot energy, and to overcome the current challenges with thermal energy.

Professor Martin Freer, Director of the Birmingham Energy Institute and host of the event, highlighted the scope of the challenge. He stated that 40% of the energy used in the UK is from heat demand. Cold and cooling accounts for between 10% and 15% of UK electricity demand. ERA aims to bring the challenges of heat and cold demand together. ERA aims to drive and coordinate research activity within the group. 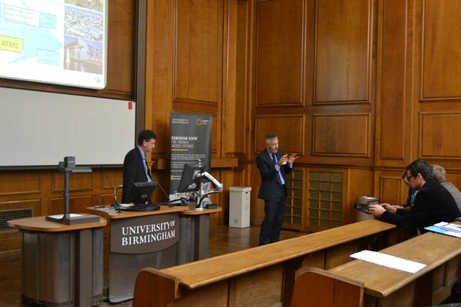 Professor Freer (l) and Gordon Waddington open the ERA seminar
The initial £60 million research fund will go largely into capital investments and it is broken down into three sections. The first phase will focus on research into replacing today's small scale, domestic heating systems. The second phase will focus on integrated energy solutions, such as the next generation of lighter, more efficient batteries used in buildings and transport. The final phase is research into geo-energy, carbon capture and storage (CCS), energy storage and decarbonisation.

Professor Freer was asked how they were measuring the success of the project. ERA will be judged on how many jobs it creates and how much growth it stimulates. He explained that seven years ago 90,000 people worked in the energy industry. Today, 130,000 people work in the sector. Freer suggested that there was scope for another 100,000 jobs in energy, although not all of them would be based in the UK.

"We don't have to make everything succeed in this plan, which means we can try things to find what works."

"The chancellor thinks it is so important that he announced the funding three times. The universities within ERA assured the chancellor they will work together and not compete. This excited him politically."

The Midlands is strong in manufacturing and in energy skills and resources, which is part of the reason why the group succeeded in winning the funding.

Research into Heating and Cooling

Speakers from companies and universities in the group covered some of the research areas they are looking at, such as biomass, deep geothermal technologies, heat pumps, combined heat and power (CHP) and district heating.

Bob Critoph from I-STUTE at Warwick University explained the research his team is doing in retail refrigeration with ASDA. He also put forward a point of view that the he believes there will be a large market for gas heat pumps which are homes on the gas grid can use to reduce their gas consumption and bills becuase of their efficiency compared to condensing boilers.

Toby Peters, CEO of the Dearman Engine Company, opened the section of the seminar on cooling research. He pointed out that only 0.2% of energy research goes into cooling research. He also explained that in emerging markets 40% of the food is lost post-harvest because of the lack of refrigeration. If these markets had the same level of sophistication in the cold chain hundreds of tonnes of food could be saved.

Mr Peters explained that, in transport, 20% of the fuel used is for refrigeration. He described it as “cool powered by dirty diesel”. In his view, 'clean cold' is a massive market opportunity. His hope for the ERA funding is for the UK to build on its current strengths and to take a lead on the rapidly emerging markets.

Important questions which came from the attendees centered around the shortage of skilled installation and maintenance engineers in the UK. Speakers pointed out the need for skills throughout the system, from installation to design.

Speakers agreed that a bug, cultural shift is needed when it comes to the country's approach to heating and cooling. People need to think in a different way to make the ideas successful financially and practically. A new type of engineer will be needed; an engineer that understands not only heating, ventilation and air conditioning, but also electrics and plumbing.

People will be reluctant to adopt new technologies, as has been shown by the heat pump market which has been slow to take off. Speakers suggested that new funding models are necessary to enable householders to lease new heating or cooling systems for short periods to see if it worked for them.

Notable omissions for the ERA seminar were the lack of discussion about how to encourage UK businesses and householders to reduce their energy use. Clearly, it is difficult to attract funding for energy reduction initiatives. And, it was clear that the Institute of Refrigeration was not part of the ERA scheme which was surprising.

Find out more about ERA here.