Variable frequency drive manufacturer Invertek has created a one-off golden drive to mark the production of its two millionth drive.

The milestone comes after Invertek announced record sales during 2020 and the first quarter of 2021. It follows significant continued year-on-year growth since the company was established 23 years ago.

The two millionth drive, produced at Invertek's global assembly centre at Welshpool, Powys, is part of an order placed by Hiflex Automatiseringstechniek BV, Invertek’s sales partner in the Netherlands.

“They are all creating energy and process efficiencies in motor control across a range of industries from manufacturing to marine, agriculture to water, and cranes to food and beverage. VFDs are playing a major part in helping reduce carbon emissions globally through efficient motor control. We’re very proud of how our inverter technology is helping contribute to that.” 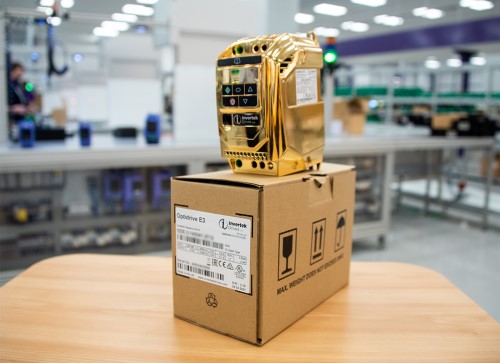 The special drive was assembled by one of Invertek’s longest-serving manufacturing technicians, Janet Evans, who has worked with the company for 18 years on one of the global assembly cells (GAC), where each drive is built to order, tested, and packed before being consolidated and despatched internationally.

“I felt very privileged to have assembled the two millionth drive. I’ve seen the company grow and develop over the years. It’s amazing to think so many of the drives I’ve assembled are being used all over the world,” said Janet.

Invertek Drives was established in 1998. In November 2019 it was acquired by Sumitomo Heavy Industries, a leading global manufacturer and distributor of power transmission and control equipment.