​That seems fairly clear and is further strengthened by a service ban, enacted under Article 13 – Control of Use – of the F-Gas Regulation whereby from January 1 2020 the use of refrigerants with a GWP of 2500 or higher for servicing or maintenance work is also prohibited on refrigeration systems with a charge size of 40 tonnes CO2 equivalent or more. That is less than 10.2 kg of R404A or approximately 14.6 kg of R422D, so not just very large systems but also a considerable working stock of medium sized applications will be affected by the service ban. Sadly, that’s where the straightforward side of this ends as there are a lot of confusing exemptions and caveats to the service ban.

As of January 1 2020 there is a placing on the market ban, that is to say sold and installed, for any of the following:
Exemptions
Whilst it is true that there is an exemption from the service ban for military equipment, or where the application is designed to cool products to below -50°C, the issue is becoming clear that although the application and technology is exempt the refrigerant sadly isn’t, because it is being rapidly and aggressively phased down under the F-Gas phase down process that we covered in the previous publication. 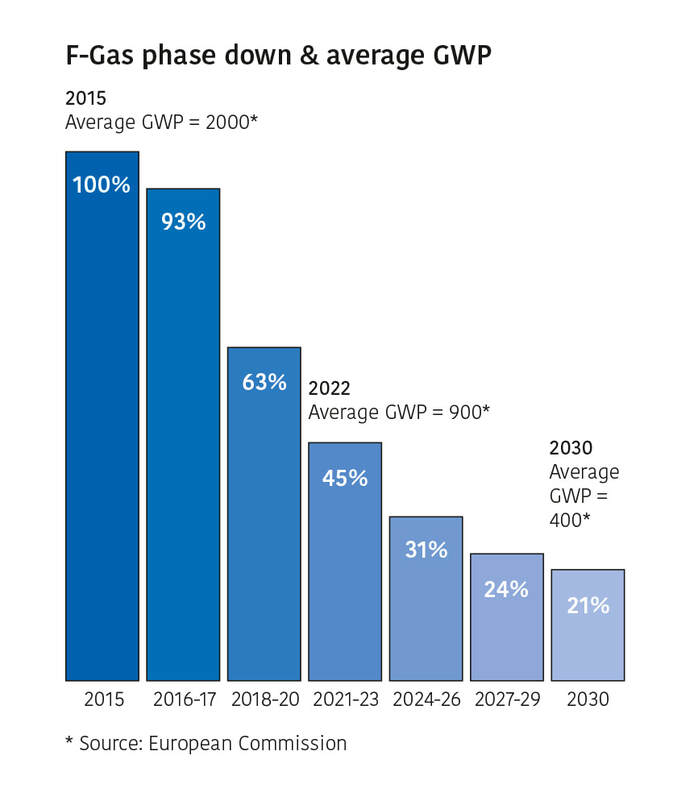 ​Looking at the phase down steps graphic we see that the average GWP in 2015 was 2000 and that this needs to drop to 900 by the year 2022. The current average of all the gas placed on the market is a GWP of 1260. To put that in perspective we need to remind ourselves of the GWP of commonly used refrigerants across the sector today.
​The one which stands out immediately, of course, is R404A which, with a GWP of 3922, is nearly twice the average before the phase down steps started and this highlights why it has been one of the main targets for an effective phase out even ahead of the product placement and service bans.

The reason this is becoming a problem despite the exemptions is that with the GWP of R404A being 4.5 times the average of the total amount of refrigerant being placed on the market in 2022, and more than 3 times the average currently, so the gas manufacturers do not want to be selling lots of this refrigerant because it uses a huge chunk of their quota to do so. As a manufacturer, why would you want to sell one tonne of R404A when for the same quota allocation you could sell nearly 6 tonnes of R32?
​
So even if the technology, application, or size of the system not being 40 tonnes CO2 eq. or above doesn’t cause you to be facing the service or use ban, that doesn’t mean you will actually be able to buy the refrigerant you need. And if you can, at what price will that product come at?

Alternatives
There are numerous alternative options for many sectors now that are commercially available so that the use of lower GWP and even ultra-low GWP alternatives is not only desirable but absolutely necessary if we are to protect those sectors that don’t have the luxury of an alternative and that must continue using the medium GWP HFCs for the foreseeable future.

It is fairly easy to identify alternatives for most commercial refrigeration systems as this market has products coming onto the market currently that should allow a transition away from the R404A GWP levels and towards low GWP alternatives such as R454C or R455A. And for small or light commercial air conditioning and heat pumps there is a viable alternative to R410A in R32. But because all of these lower GWP alternatives are at least mildly flammable then we are presented with restrictions on charge limits under the EN378 safety standards that limit their use to certain applications only.
​
Of more concern, however, is the step at the halfway stage of the phase down process. By January 1st 2021 we need to have an average GWP of refrigerant placed on the market of only 900. That is significantly lower than the GWP of many gases still widely in use, and still being widely specified and installed in new equipment. R134a, R407F and R410A are all considerably higher than the baseline target for 2021 of 900, and yet we know that for some sectors of the market there remain considerable barriers to using any alternatives to these gases. And even worse than that, if we are to maintain the sales of R404A simply because the service ban only applies to applications above 40 tonnes CO2 eq. then we are using up crucial chunks of quota that cannot then be used where they are absolutely needed.

F-Gas enforcement
On the effectiveness of policing or enforcement of the F-Gas Regulations we have made huge strides in the last couple of years – but it is still a work in progress. Of course we work closely with the enforcement authorities – DEFRA, the Environment Agency and the devolved equivalents – but we still get a lot of disgruntled contractors bemoaning the fact that there remains a core of non-compliant contractors who think they are above the law and that the authorities will not go after them.

While the authorities have been focussed on Brexit issues and preparing for life outside of the EU, at REFCOM we have been actively trying to improve the trading landscape for those who do things properly and to level the playing field throughout the supply chain. A series of well attended F-Gas Awareness seminars across the country were run and in May we held a first UK suppliers F-Gas Awareness seminar in conjunction with Logicool Air Conditioning – a supplier we’ve talked with a lot about some of the misunderstandings across the supply sector. A number of misunderstandings were explained and cleared up at the seminar and some really positive steps were taken afterwards in levelling the playing field.

F-Gas certification requirements
There is a common miscomprehension that a business only needs to be registered if they are buying refrigerant or that sole traders are not “companies” and therefore don’t need to be registered.

A “company” in EU legal terms is anyone who performs a service for a third party for remuneration, not just incorporated businesses registered at Companies House. So any sub-contractor is classed as “a company” under the F-Gas Regulations if they do any of the following: installation, servicing, maintenance or repair. Even if a small sole trader sub-contractor is simply hanging the indoor and outdoor units, piping and handing over at pressure test stage, they are performing part of the installation process and must, therefore, be registered as a business with a company certificate such as a REFCOM registration.

Our recent technical bulletin TB045 set out the position clearly to everybody.
​REFCOM Elite for Suppliers
We have recently newly expanded the REFCOM Elite scheme to make it more accessible for those on the supply side of the industry: manufacturers, distributors and wholesalers. This was a direct result of the suppliers’ seminar where it was suggested that the industry have a voluntary code of conduct for suppliers to sign up to, run by REFCOM as the recognised and respected industry authority, and ensuring that all those suppliers signed up were making sure their sales only go to those entitled to buy refrigerant or pre-charged split systems.

It is essential that we prevent illegal sales of gas and equipment which undermines the whole regulatory framework and by taking this stand on a voluntary basis then the enforcing bodies – the Environment Agency, Scottish Environmental Protection Agency, Natural Resources Wales and Northern Ireland Environment Agency – will have their resources freed up to concentrate on the non-signed up sector, including the online sellers. We all need to work together to make this enforcement work, and we need instances of breaches of the regulations brought to our attention with as must evidence as possible.

It does seem like nothing is happening sometimes, and many of the actions taken cannot be publicised for legal reasons, but the trading landscape is slowly changing for the better. For evidence look back 10 years and see how far we’ve come in professionalising the sector, ensuring that everyone has at least some formal training behind them – not enough but it’s a start – and starting to put to an end the deliberate venting of environmentally damaging refrigerants that was so common when many of us were learning our trade.

As I said, we’ve made huge strides but we’ve still got a lot of work to do. As always, the REFCOM and BESA Technical helplines are there for members to get advice and guidance.