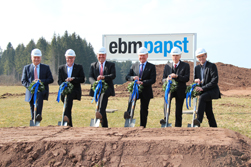 German fan manufacturer, ebm papst will open a new, €36 million distribution in Hollenbacher at the end of 2016, the company announced this week.
The new, 38,000 m2  logistics centre will ship customer order for fans all over the world. However, the new site was only possible after local improvements to roads near the site were accepted by local government officials. The site suffers from a steep, narrow road which is difficult for lorries to access. Improvements to the road will start in Spring 2016.

Chairman of the ebm-papst group management board, Rainer Hundsdörfer said:

"We urgently need this upgrade if we are to optimise logistics between our locations in Hohenlohekreis. If this road were not going to be improved we would not have approved this sizable investment in Hollenbach and Mulfingen. I am pleased that we will remain faithful to the area and can safeguard jobs in Hohenlohekreis for the long term.” ​