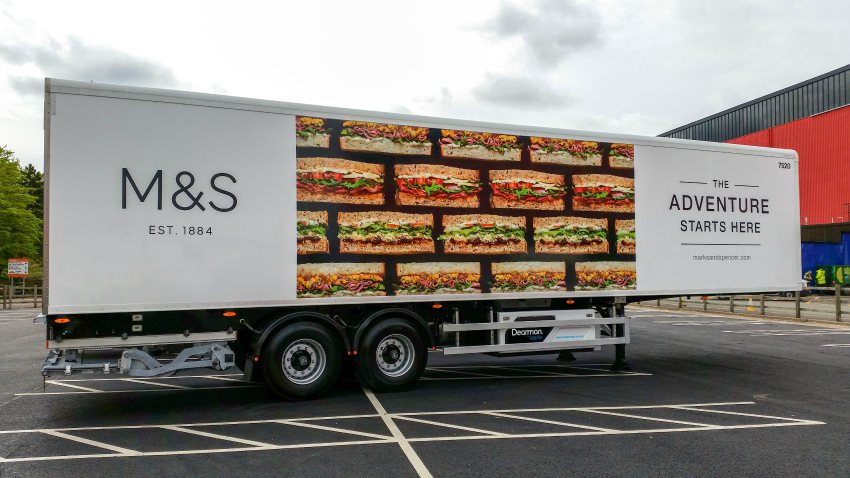 Dearman is working with Marks & Spencer as the retailer seeks to reduce carbon dioxide (CO2) emissions from its chilled deliveries.

Dearman’s liquid nitrogen-powered engine is zero emission. The technology will replace diesel-powered secondary engines used to power transport refrigeration units (TRUs), which are used to keep food cold on the road.
Compared to a conventional diesel-powered TRU, a Dearman Hubbard system has the potential to cut CO2 emissions by up to 95%. The venture sees M&S lease a dual compartment Dearman Hubbard TRU, on a refrigerated semi-trailer, to be operated out of its Hemel Hempstead depot.

M&S has a strong record with liquid nitrogen TRUs; it led the way with hundreds of Polarstream trailers 20 years ago, and has taken on 15 Frostcruise units in the last four years. Last year saw M&S use more than one million litres of liquid nitrogen.

M&S’s is aiming to quantify the costs and environmental benefits of Dearman’s technology before leading to a nationwide roll-out.

M&S’s last 10-year sustainability plan already saw it become the world’s first and only carbon neutral major retailer. It now plans to go even further in cutting its carbon emissions and in June 2017 launched its new sustainability plan- Plan A 2025. The retailer has over 1,000 stores across the UK and 60% of its UK turnover is from food sales.

Dearman CEO Scott Mac Meekin said: “We are delighted to be launching a partnership with a real heavyweight on the UK high street. Marks & Spencer is a trusted brand for the quality of its products and the company is clearly ambitious on the sustainability agenda. It wants to go much further in cutting the carbon dioxide emissions of its chilled deliveries and a Dearman transport refrigeration unit is uniquely placed to achieve that goal.”

Anthony Whitehouse, M&S Fleet Engineer, said: “Dearman’s impressive liquid nitrogen technology has shown the kind of results it can achieve and we are excited to be partnering with them. Our latest sustainability plan is ambitious and includes bold new science-based target to further improve the efficiency of our operations. Our chilled delivery trucks have a role to play in that and we believe Dearman’s transport refrigeration unit could help us meet our emissions targets.”
Content continues after advertisements