Green Point UK has extended its remanufacturing operation to include transcritical CO₂-based compressors.

Will Pribyl, general manager at the specialist services arm of BITZER UK, said: "We have been aware for a while of an emerging need among UK customers for a certified remanufactured option as a growing number transcritical CO₂ units come to the end of their working lives. The obstacle has been the high pressures required for full quality assurance testing. However, following recent investment in a new facility at Green Point UK, we can now offer a complete service for BITZER transcritical units, returning them to full original specification, with quality underpinned by the manufacturer.

"It is a live issue for national contractors, many of whom have comprehensive contracts with customers. First-time fix is vital, as call-backs for faults or repairs can eliminate profits. Our comprehensive remanufacturing and testing process, overseen and backed by BITZER, gives total confidence that our transcritical units will perform to specification, with safety assured by certificated testing."

The service covers all BITZER Ecoline 2, 4, and 6 cylinder transcritical CO₂ compressors, which are deployed in thousands of applications across the UK, including supermarkets, food and drink manufacturers and industrial process applications.

Pressure testing is carried out on a bespoke hydraulic test rig, developed by Green Point UK, which is able to test compressor bodies up to 180 Bar. Based on oil, it overcomes the risks associated with conventional pressure testing using air as a direct compression medium.

Remanufactured transcritical units are covered by a one-year warranty as standard, with an optional further one-year extension, as for new compressors. 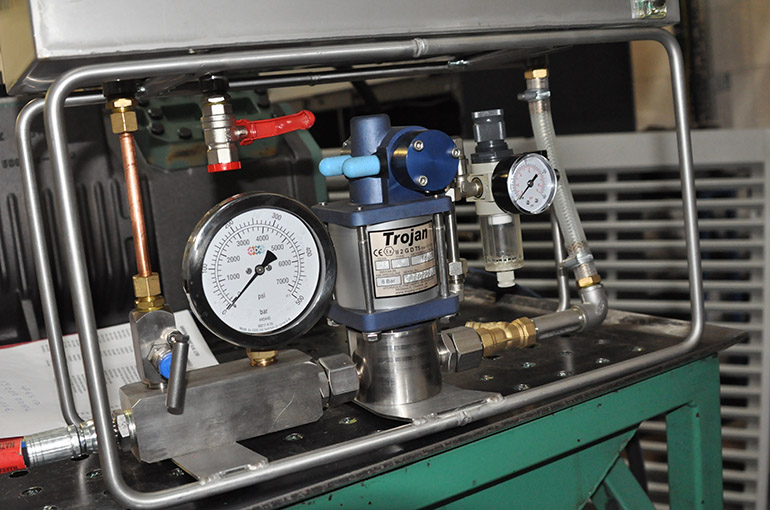 Based on oil, the rig is able to test compressor bodies up to 180 Bar and overcomes the risks associated with conventional pressure testing using air as a direct compression medium

Kevin Glass, managing director of BITZER UK, said: "The UK is one of the first in Green Point's global network to introduce this service for high pressure CO₂ units. We have played a key role in developing the critical pressure testing technology, and are proud this UK advance has opened the way for what will be an international roll-out of transcritical remanufacturing in the months and years to come.”

Use of transcritical compressors took off in the early 2000s as a number of UK supermarkets championed the solution as a low-GWP alternative to high-GWP refrigerants, putting the UK in the vanguard of the switch to cooling with carbon dioxide.

In addition to the capital cost and safety advantages, Green Point says a further benefit of the remanufactured units is that, over time, compressors tend to become less efficient due to normal wear and tear. Remanufacturing by Green Point returns units to their original factory specification, reinstating original levels of energy efficiency.

Pribyl added: "Unlike most competitors, we fit a new motor to every remanufactured compressor, irrespective of the condition of the existing motor. This can make a big difference to efficiency. With soaring energy prices, it can significantly reduce running costs for an end user with a pack system. For companies operating national estates, with perhaps thousands of refrigeration systems, it could amount to millions of pounds of savings a year."