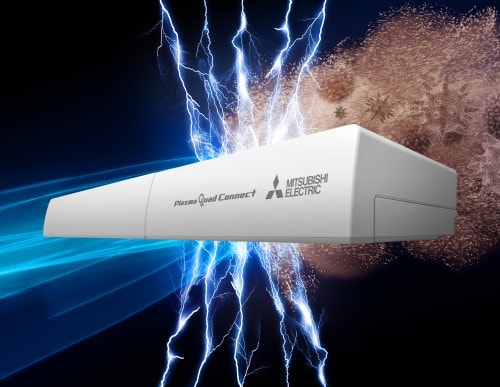 Mitsubishi Electric has launched a bolt-on air purifier said to be able to neutralise six key indoor pollutants and inhibit 99.8% of SARS-CoV-2.

The Plasma Quad Connect can be added to Mitsubishi Electric’s air conditioning for both new and existing indoor units across the M Series, Mr Slim and City Multi ranges.

The device works like an electrical curtain to catch and neutralise even microscopic particles in the air, to significantly improve indoor air quality.

The technology, has been independently tested against SARS-CoV-2 by the Microbial Testing Laboratory, Japan Textile Quality and Technology Centre in Kobe, Japan. Plasma Quad Connect has also been found to be effective against bacteria, dust, viruses, mould and allergens such as pollen, in addition to microscopic particles down to PM2.5.

“There’s a lot of debate around indoor air quality, especially as we look to move back into offices and buildings and good ventilation is the first thing any business should look at,” said Mark Grayston, product marketing manager for Mitsubishi Electric. “At the same time, air conditioning with good filtration can play a significant role in optimising indoor air quality.

“Plasma Quad Connect is automatically powered when the air conditioning is in operation. Our design engineers have not only developed something that is simple to install, it is also easy to use so building owners now have a straightforward and highly effective solution to improving indoor air quality.”