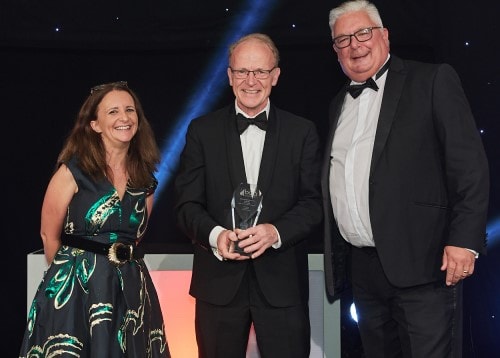 The controls industry recognised its outstanding people, products and projects as the BCIA Awards returned at the Hilton Birmingham's Metropole following a virtual event last year.

Immediate past president of the BCIA, Jon Belfield, received the award for Outstanding Contribution of the Year in recognition of the amount of time, effort and enthusiasm he has dedicated to new initiatives which have benefited the whole industry.

First to collect their award from comedian Lucy Porter were ABEC who were named BEMS Installer of the Year. The Engineer of the Year Award was given to Steven Nuttal of Aimteq Solutions, with Lewis Williams of Detail Design Engineering named as the winner in the Young Engineer category.

Ecopilot (UK) & E.ON Control Solutions won the Energy Management Award for their work with Aberdeen Standard Investments at One Trinity Gardens in Newcastle, while Global Associates took the prize for Best Service and Maintenance Provider.

Technical Innovation of the Year went to Angel Guard in the Product category for their AI Clinical Washbasin, and BGES Group’s work on a major renewable retrofit at the Oxfordshire Golf Course won in the Project category.

InTandem Systems took the Contribution to Training Award, and the impressive work by Carbon Numbers on the Blizard Building for the London School of Medicine and Dentistry scooped the Smart Buildings Award.

BCIA president Terry Sharp said: “It was fantastic to have the industry’s finest all together again and you could really feel the excitement on the night. The fact that the building controls industry has continued to thrive during a very difficult period just demonstrates the important role it plays in the modern world and I am so glad that the finalists and winners could celebrate their achievements.”

On Jon Belfield’s award, he added: “I am very proud to call Jon a friend and I am personally delighted for him. If he retired tomorrow he would leave a lasting legacy of someone who evoked positive change in the building controls industry.”