It was back in September 1990 that Colin Burrows decided to leave his role as a service engineer with Comfort Cooling and go it alone.

Three decades later, the CBAC Services is still going strong and Managing Director Colin has few regrets. “Of course, there have been some up and downs,’’ he says, “anyone who runs a business will tell you it’s hard going at times. But I still really enjoy this business… I wouldn’t still be doing it after 30 years otherwise.’’

Colin began his working life as an apprentice welder at the YORK chiller factory in Basildon. Then the opportunity to get out on service with Comfort Cooling was to prove the turning point in his career. He studied at college two nights a week when his working day was done and remains an ‘engineer at heart’. “I think that’s a big part of why the business works,’’ he says. “The people here know that I’m always around to talk about the jobs they are working on.’’

He worked on his own for the first six or seven years, occasionally calling in a favour when he needed help with a heavy lift. Then, in 1997, CBAC became a limited company and took on two engineers, one of whom, Robert Stahl, is still with the business.
The company now employs six engineers, plus two staff in the Rochford office. Colin says he has never actively looked to grow. “We’ve always had our feet firmly on the ground,’’ he says. “We have rarely advertised, the work has pretty much all been through word of mouth.’’

‘Proper engineering’
That work, centred on London and the Home Counties, includes long-standing relationships with customers including Surrey Police and covers the full spectrum of AC contracting. Those days on the shop floor in Basildon may be a distant memory, but chillers are still at the heart of CBAC. “It’s definitely one of our key strengths,’’ says Colin, “although we don’t say ‘no’ to many things.’’

CBAC has been a Daikin D1 installer for many years and in 1998 Colin was invited by Lee Nichols for what he describes as the "trip of a lifetime" to Daikin Japan. "I still talk about when the opportunity arises as if it was yesterday,'' he recalls.

Over the years, CBAC has widened its reach by teaming up with various business partners to provide a ‘one-stop shop’ for building services. Yet it remains very much an air conditioning contractor.

A recent project saw the replacement of condensing coils on a De’Longhi chiller on a rooftop in Hammersmith (see case study 2 on facing page), aided by mobile tower crane specialists City Lifting, who have worked with CBAC for over 15 years.

Colin said: “After nearly 30 years of London’s dirty air and several repairs by different companies, it was time to breathe some new life into an old chiller. We successfully replaced all four condenser coils, which were badly corroded and struggling to maintain air flow during the summer season.

“The job was led by our Supervisor, Ian Betty, who has been with us for 18 years, and it was a proper engineering project. The way the chiller is performing now gives us and the client real satisfaction.

“Moving forward, CBAC has many more projects in the pipeline with key clients, and I look forward to many more years supporting the industry with the great team I have.’’ 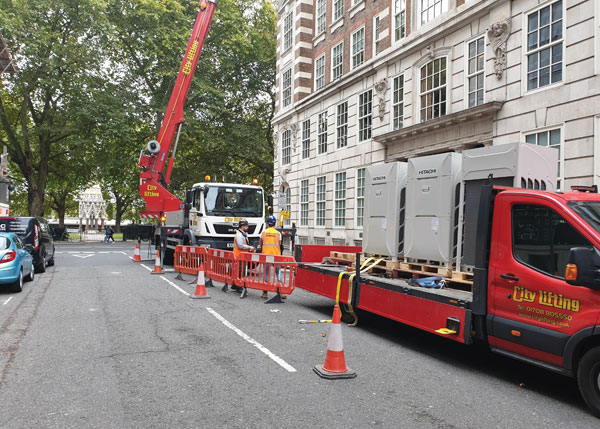 CASE STUDY 1: Cromwell House, London
CBAC was awarded the PPM contract back in 2015 from Bilfinger FM (now Apleona FM) as one of their preferred suppliers. It was not long before CBAC realised that the site had a poor history with component failures on its Hitachi VRF systems throughout the eight floors, especially compressor and inverter boards.

Having consulted Hitachi technical on several occasions, CBAC came up with a solution that would cost the client but give some peace of mind for the future. Hitachi pointed out that the new style of condenser would not communicate to the ducted indoor units without the replacement of the BC boxes. CBAC identified the worst offenders, 4 out of the 10 outdoor units and the 56 BC boxes.

Craneage went smoothly on the day, with the addition of disconnecting a good condenser to make way for a new one.

The decision was made to streamline the indoor BC works, which was all out of hours due the building being occupied, by removing the risk of hot works. CBAC purchased a Zoomlock kit from Greenmill AC supplies for pipe crimping on the refrigerant pipe work.

The engineers worked in pairs and, by taking it turns, completed a system per week. 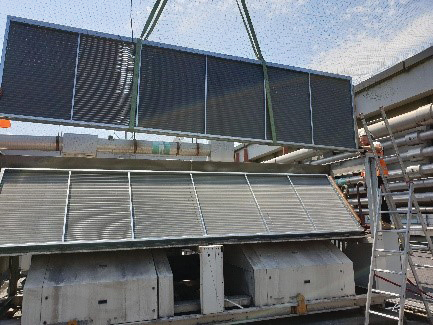 CASE STUDY 2:  L’Oreal London HQ
CBAC has been servicing the two chillers since 2012 through the main FM companies on site. In recent years it has been difficult for the ageing chillers to maintain cooling in the building, due to the condition of the condenser coils.

In 2016 the client requested all 24 condenser fans on both chillers be replaced with Ziehl Abegg Blue high efficiency fans to try and gain more air flow through the coils, followed by an adiabatic spray system to cool the air before going through the coils. Both works just prolonged the need to replace the coils.

There was some additional work required while pressure testing each circuit as an engineer found weeping gaskets on the compressors. CBAC employed one of its business partners, Chris Page of AC Compressors, to carry out these works.
All four circuits had new sight glasses and drier cores before finally evacuating and recharging.

The Daikin screw compressors are all still operating well and, with the new coils, this chiller should last for many years.