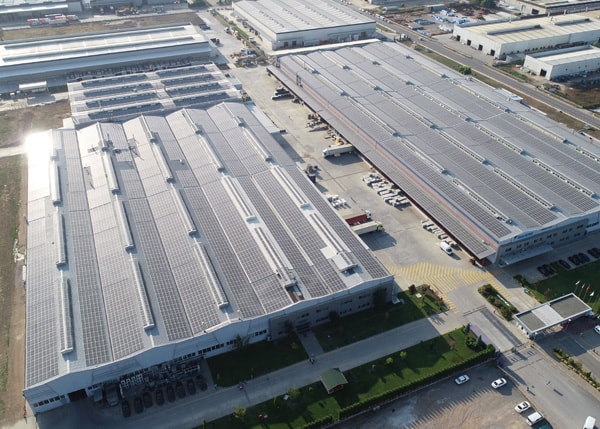 Solar panels on the roof of the Daikin factory in Sakarya, Turkey

As part of its ambition to become energy neutral by 2050, Daikin Europe fitted the entire roof of its production site in Sakarya with solar panels. The panels generate 7 million kWh, around 90% of the energy needs of the site, making the factory nearly energy neutral.

The installation required an investment of 3 million US dollars, but Daikin Europe believes the energy gains will see that amount paid back in less than seven years’ time, with environmental benefits to follow for years to come.

Alongside the development of its Sakarya facility, Daikin Europe is also investing in its other production sites across Europe. The factory in Ostend, Belgium is fully supplied with green Belgian electricity. It is also equipped with 2,000 solar panels and was recently awarded the ‘Factory of the Future’ award.

Patrick Crombez, General Manager Heating and Renewables at Daikin Europe, said: “If we want to become energy neutral within three decades, we need to act at all levels of the Daikin supply chain, from our suppliers to our production processes, and finally with the products we deliver. We have embarked on a long and complex journey to reduce our carbon footprint. But when I look at all of the initiatives being undertaken by our team; I am confident we will meet this goal. The production site in Turkey is an inspiring example of what’s possible when companies dare to act.”

Daikin Europe recently expressed its support for the European Commission’s Green Deal, which aims to make Europe the world’s first carbon-neutral continent. The company is confident heat pumps and other innovations in sustainable heating and cooling will play a key role in making this goal a reality.