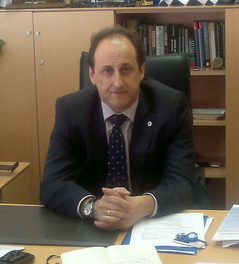 Enrique Flórez is the new boss at Hitachi Air Conditioning in Europe, the company announced this week.

Mr Florez takes over as Vice President and General Manager in Europe from 1st June 2016. His task is to lead the air conditioning company's market strategies and growth plans in Europe. His remit includes making the most of the recent joint venture between Hitachi and Johnson Controls to develop their business in the region.

HItachi has its European factory near Barcelona where it makes air conditioning products specific to the requirements of the countries in the Europe. Enrique Flórez will need to work closely with the factory to ensure the company keeps creating products customers want to buy.

Enrique Flórez is an industrial engineer who has been involved with the building construction sector for over 20 years. He joined Johnson Controls in 2008 and is currently Regional Director Spain and Italy, Johnson Controls Building Efficiency.
Visit www.hitachiaircon.com or www.hitachiheating.com
Content continues after advertisements