Concern at lack of understanding over HFC phase down

A significant number of European retail professionals who responded to a survey by Emerson said they wereunaware of upcoming regulatory changes related to the phase down of HFCs as refrigerants. 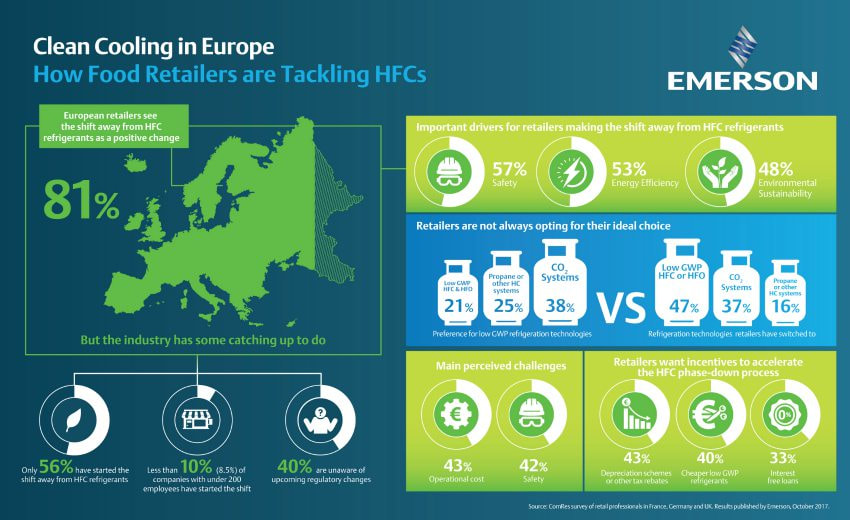 A significant number of European retail professionals who responded to a survey by Emerson said they were unaware of upcoming regulatory changes related to the phase down of HFCs as refrigerants.

Speaking about the survey findings, Eric Winandy, Director of Integrated Solutions, Emerson Commercial and Residential Solutions said: “European retailers are enthusiastic about the transition to low GWP refrigerants, but it is concerning that there is still a lack of understanding of the upcoming regulatory changes. It was also surprising that capital and operational cost doesn’t rank as a key driver for retailers identifying replacement systems, as industry analysis shows there could be big maintenance liabilities associated.”

Pressure
Among the three primary alternative options available, carbon dioxide (CO2) technology was most commonly ranked as the preferred choice for replacing HFC systems at 38 per cent, followed by hydrocarbons such as propane, and hydrofluoroolefins (HFOs).

Despite being the most popular choice however, industry analysis shows CO2 systems could cost a medium-sized retailer as much as €51,000 more per store compared to hydrocarbon integral systems over a 10 year period. Furthermore while CO2 is a significant improvement over HFCs in terms of global warming potential (GWP), it is found to have lower energy efficiency performance and higher maintenance requirements than other alternatives.

“The EU F-Gas regulation has placed a significant amount of pressure on food retailers to quickly transition away from HFCs,” Winandy said. “The challenge for the industry will be to balance this pressure with the need to take the time to learn about all the options available, and what it means for businesses in the long-term. Choosing the right system to replace HFCs can be a win on multiple fronts. It can help retailers see cost, operational and environmental benefits.”

Options
The survey also shed some light on the challenges and opportunities for making the transition away from HFCs.

Challenges identified included operational expenditure and installation disruption which drew significant scores of 43 per cent and 33 per cent respectively.  Yet interestingly, cost alone was not identified as the main priority for selecting a new refrigeration system. The survey highlighted the desirability of energy efficiency and environmental sustainability, with energy efficiency scoring 48 per cent and environmental sustainability 39 per cent.

When asked what would encourage respondents to accelerate the replacement of HFC refrigeration systems with lower global warming potential options, depreciation schemes or other tax rebates were the most popular (43 per cent), followed by finding less expensive low GWP options (40 per cent). This places an onus on regulatory bodies to provide more incentives to retailers looking to make the shift, and to invest more in the research and development of new technologies.

Survey findings are based on an online poll of 140 professionals with decision-making responsibility for purchasing in the retail sector. This included 40 participants in France, 50 in Germany, and 50 in the UK. Fieldwork was conducted by ComRes between 15-31 August 2017.