Chemours Fights Back Against 'Bankruptcy' Report 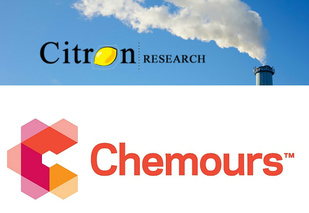 Chemicals giant, Chemours, a spin-off from DuPont, issued a statement last week denying a damning research which alleged it is 'a bankruptcy waiting to happen'.

Citron Research, a Wall Street analysis firm, published a report on 2 June 2016 stating that it believes Chemours was 'designed for bankruptcy'. The research firm alleges that the chemical company's legal liabilities and debts are the big problems, which its former owners wanted to shed.

The Citron Research report alleges Chemours is $4 billion in debt which is putting the refrigerant manufacturer under pressure with its finances. Chemours' share price has plummeted from US$20.85 in July 2015 to US$8.45 in early June 2016.

In its own statement. Chemours stated that “strongly refutes the report by Citron Research”. The company said that it has a plan in place to reduce its debt burden to “approximately three times in 2017”, and to improve its earnings compared to 2015 by $500 million.

Since being spun off from DuPont, Chemours' management team has been cutting costs and investing in refrigerant production initiatives to improve its profitability, amongst other investments. It aims to cut costs by a further $200 million in 2016.
Content continues after advertisements