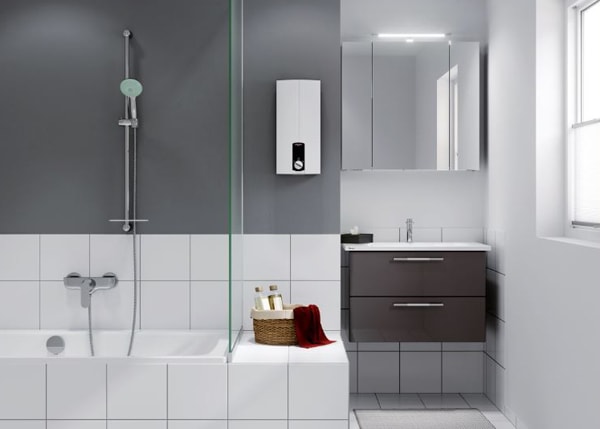 The apartment building in Trafford Street, Chester, uses wall-mounted instantaneous systems in place of traditional, larger floor-standing cylinders to allow Watkin Jones to improve sustainability and maximise the internal space available in the homes for customers.

IHW systems work by heating water instantly as it is required rather than storing hot water in a tank, which leads to waste through heat loss. The reduction in energy waste is said to amount to as much as 0.23 tonnes of CO2 per year per home and a £60 saving for bill payers annually compared with a 150 litre direct cylinder with typical specification.

The small units are placed on internal walls, freeing up space in homes that would otherwise have been required for heating systems. A traditional cylinder can occupy as much as 10 per cent of floor space in a city-centre apartment. IHW systems are also quicker and easier to install and don’t require maintenance like traditional heaters which have problems with scale build-up over time and routinely have to be checked for expansion.

It was previously believed that the UK grid voltage levels of 240V prohibited these systems working in British homes. Stiebel Eltron, Watkin Jones and SP Energy Networks collaborated to make these viable in the scheme. The electricity supply is provided to each floor of the development instead of the typical phasing where the supply is split between apartments. This creates a simple way of providing 400V to for every home in the scheme.

According to Stiebel Eltron, using IHW units may help developers to get more housing schemes through the planning process as a result of their improved Standard Assessment Procedure (SAP) performance.

Mark McManus, Managing Director at Stiebel Eltron UK, said: “Our clients view sustainability as a key priority. Not only is it the correct thing to do for the planet, councils are increasingly setting the bar high for energy efficiency at the planning stage of new housing schemes. Electricity is the sustainable energy source for the future so the launch of IHW systems in the UK market is set to have a huge impact on getting new housing off the ground.

“Developers working to tight margins are also able to maximise the internal layout of major BTR projects too as IHWs occupy a fraction of the space of traditional water heating systems. Using IHWs gives developers the option to create bigger spaces for residents or plan for a greater number of homes at any given site. And because IHW units don’t run out like traditional stores, customers don’t have to deal with the disruption caused by heating maintenance.”

Gwyn Pritchard, Managing Director of Watkin Jones BTR division, said: “IHW systems are a fundamental part of the success of this scheme. The technology has significantly improved the energy efficiency whist reducing maintenance costs for our residents. At the same time, we as a developer are able to create homes that don’t need to account for the significant space requirements of traditional water heaters.”

Geoff Murphy, Lead Engineer at SP Energy Networks, said: “It’s been great to have the opportunity to get involved in this project. Not only does it allow us to collaborate with our industry peers on the increased uptake of low carbon technologies, it’s also going to provide us with another area of visibility on the network impact – something that’s ever more critical as we move towards net zero.”

In addition to the installation at the Trafford Street development, Stiebel Eltron intends to roll the product out to the wider UK market and work with developers to improve the energy performance of their schemes.