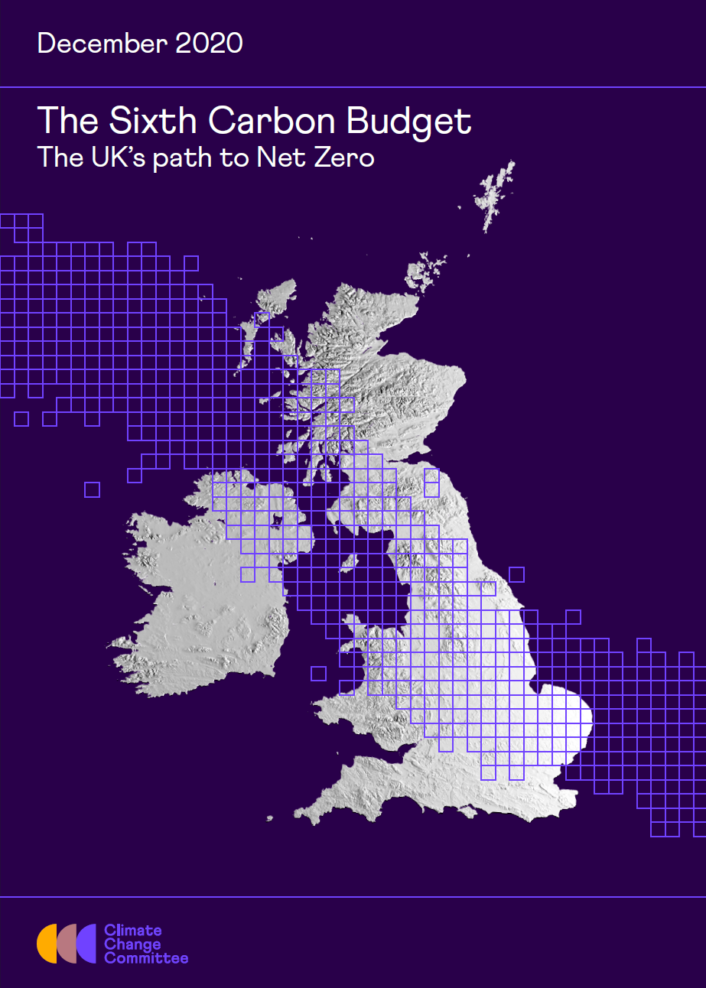 The recommendation comes in the CCC’s Sixth Carbon Budget, which it describes as the first ever detailed route map for a fully decarbonised nation. It calls for a 78% reduction in emissions between 1990 and 2035, effectively bringing forward the UK’s previous 80% target by nearly 15 years.

The CCC says the budget can be met through four key steps:

Laura Bishop, Chair of the Ground Source Heat Pump Association, said: “There is a huge amount of content in the CCC’s report to gladden the hearts of the heat pump sector, with an ever stronger emphasis on the dominant role that electrification will play for heat in buildings.

“It is essential that the Government sets a clear commitment to electrification through the 2020s, including a stable and long-term support framework to build the heat pump supply chain to sufficient scale to deliver near-term emissions reductions and keep full electrification on the table.”

Bean Beanland of the Heat Pump Federation said: “The unambiguous identification of the required high level policy package is exactly what is needed for the heat pump industry to deliver against the ambitious political intent set out in the Prime Minister’s recent 10-Point Plan for a Green Industrial Revolution.”

“There is much to do, and we need to get moving. We need clear signals and direction from the Government on the critical role for electrification, and steps to be taken to make low-carbon financially attractive - with recognition of the electricity/gas spark-gap, the value of flexible electric loads, targeted incentives and the promotion of green finance.”

Phil Hurley, Managing Director at NIBE Energy Systems, said: “Today’s Sixth Carbon Budget provides the Government with the route map it needs to develop its policy pathway to net zero. It is critical that this is provided as soon as possible to provide certainty and direction to industry. Installers and the wider supply chain are key to delivering on these recommendations; this must be recognised and acknowledged with urgency.

"We have already seen some positive announcements from Government in recent months, including the target to deploy 600,000 heat pumps per year by 2028, and an emissions reduction of 68%. Today’s Budget sends a signal, however, that more must be done.”

Morag Watson, Director of Policy at Scottish Renewables, said: “We welcome the CCC’s Sixth Carbon Budget, which contains advice to Government to move faster to reach net-zero and recognition that renewable technologies are key to delivering the cheap, low-carbon energy we need to achieve this.

"The report highlights that a portfolio of zero-carbon generation technologies will be needed to reach these ambitions. Scotland's abundant wind resources, leading position in onshore wind, world-leading floating offshore wind projects, marine energy technologies and expertise and the restoration of our peatlands, supported by the renewable energy industry, will play a key role in this.

"The report also outlines that achieving our ambitious emissions reduction targets can be done at low overall cost and would bring enormous socio-economic opportunities across the country, particularly to Scotland's most remote and rural areas.

“By adopting the measures recommended in this report the UK Government would demonstrate the ambitious global leadership required from the host of COP26 and ensure the UK is leading global efforts to tackle climate change.”

Mark Wilkins, Head of Training and External Affairs at Vaillant, said: “Having ambition is to be applauded, but when it requires an industry to make wholesale changes from manufacturing capabilities through to upskilling the amount of heating engineers able to fit the product themselves, this time needs to be factored in. It is hoped that the Energy White Paper, Heat and Buildings Strategy and UK Hydrogen Strategy, will give greater clarity when they are unveiled early next year, and give guidance to the industry of where focus is needed, be that in heat pumps, hydrogen boilers or hybrid options.

“We cannot forget that homeowners must also be taken along on this journey too. Here, homeowners need a better understanding of the costs and the differences in heating technology and they need easier access to local installers that are trained and able to deliver these technologies.  These add extra hurdles to cross before we have everybody on board with either hydrogen or heat pump solutions.

“The most notable point about many of these latest announcements, of which the Committee on Climate Change’s report on the Sixth Carbon Budget is most recent, is the constantly changing dates. On the face of it, it may seem simple to pull a date forward two or three years. However, the reality is, it leads to unnecessary uncertainty and confusion. Much work is already going on in the background, but it is important that the industry tasked with making many of these changes is fully consulted to ensure success.

“The announcement calls for hydrogen ready boilers to be mandatory from 2025 which is too soon considering some areas of the UK may not be on the hydrogen map until 2050. Where replacement boilers are concerned, knowing which parts of the country, and, vitally when they will receive hydrogen, would mean the industry could then focus on preparing these areas with the right products so they are fully equipped to make the switch. Otherwise, we run the risk of thousands of hydrogen ready boilers being fitted across the country, which potentially will add extra costs to the homeowner, and they could eventually be replaced without ever having hydrogen flowing to the property.

“Equally, we need a clear way of making hydrogen at the scale needed to supply areas as required across the UK. At the moment, hydrogen is very much in the testing phase and we won’t see the results of the first small neighbourhood scheme until 2023, so it is perhaps surprising that so much is being weighted on its use. Where commercial buildings are concerned a heat pump may not be the best option, yet the announcement calls for a phase out of natural gas in public buildings from 2030.  If hydrogen is not available, what are the options for commercial properties if natural gas is phased out? We could run the risk of missing targets because we have rushed headlong into a change that cannot be supported by the existing infrastructures.

“Care also has to be applied when we look at the figures being presented. To achieve the installation of 5 ½ million heat pumps in under 10 years, would require close to 600,000 heat pumps installed per year, starting from now. We currently expect the heat pump market to be up to 50,000 units this year  , so it is clear there is a great deal of support and effort needed to boost the market and upskill the installer network to get close to these latest figures.

“It is fair to say that the measures presented are for guidance, but it does show that we do need to have realistic measures and roadmaps in place to speed the move to the 2050 net zero target. This includes directing the industry so that it knows the scale required for each technology. A hydrogen rollout plan that shows where and when hydrogen will be available, how the gas will be made in the quantities required, for instance, and where replacement plans can be focused, would give the industry and homeowners a better picture of how it affects them. For heat pumps, we need to know how greener electricity will be generated on a wide scale to meet demand predicted.  It is also very easy to knock gas boilers and the automotive industries, but we must not forget the role that sectors such as aviation and agriculture play in meeting net zero targets, and we look forward to seeing the strategies to meet these when they are released.”

The CCC's Sixth Carbon Budget can be downloaded here.