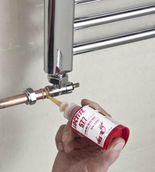 ​Peter Fardell runs a small, informal consultancy based in St Albans that seeks to keep trades involved in the plumbing and heating sector appraised of new developments. He recently experienced first-hand the benefits of LOCTITE® 577 pipe thread sealant from Henkel, after collecting a free sample at a trade exhibition.

​Mr Fardell tested the product on “difficult and very loose” radiator tails after “masses of PTFE tape” failed to work; one simple application of LOCTITE® 577 produced a totally leak-tight join in seconds.
​The scope of Mr Fardell’s consultancy is wide – embracing new products, techniques, tools and regulations, including health and safety. The business is currently still largely focussed on family, friends and some contractors, but plans are afoot to widen the customer base.

Recently, Mr Fardell was asked to specify, source and fit thermostatic and lock-shield valves on seven radiators in a domestic property. However, the task proved not as straightforward as it first appeared.

​“Upon removing the existing valves I found that the original installer had seriously over-tightened the compression fitting connections, with the result that the 10mm copper pipe had been deeply grooved at the biting/sealing point of the olives,” he says. “I also noticed that the new valve tails were a very loose fit into the radiators”.

​In this situation, using new radiator valve olives to connect the valves to the existing radiator pipework – by simply tightening the compression joint in the conventional way - would almost certainly fail. This is because the grooves in the copper pipe were too deep to allow a watertight seal, while overtightening to attempt a seal would risk puncturing the pipe.
Content continues after advertisements