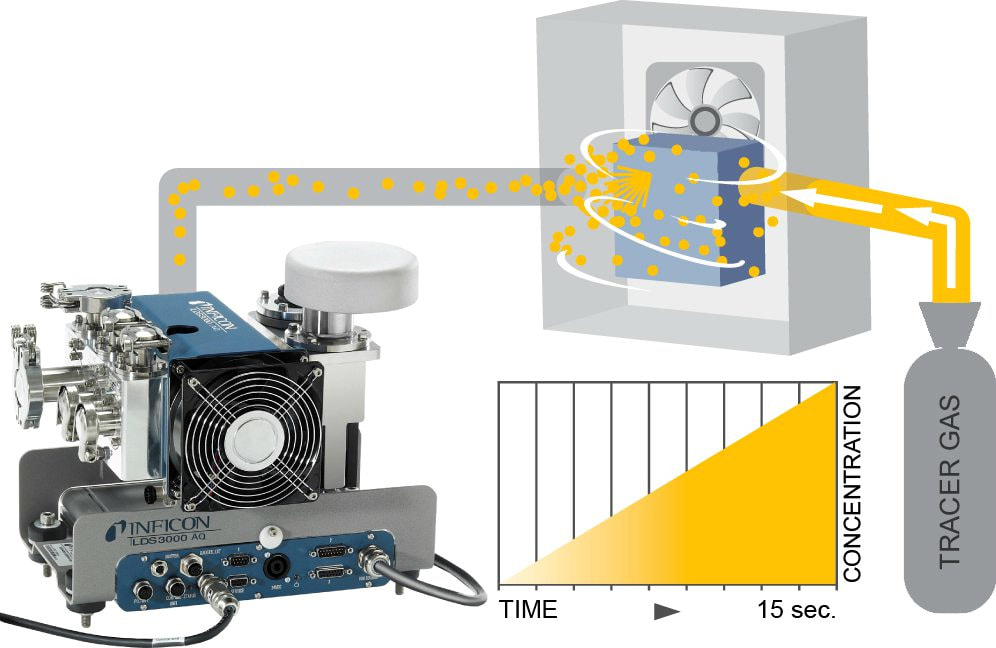 ​The fatal effects of refrigerant and liquid leaks
High-quality devices are characterised, among other things, by the tightness of their components, such as the heat exchanger unit and the heat accumulator. Even the smallest leaks can cause a small amount of refrigerant to escape continuously. As a result, the performance and efficiency of the heater decrease, which is reflected in increased energy costs. If there is no longer enough refrigerant available, the heat pump fails completely - which can result in damage to reputation and costly recalls for the manufacturer. Furthermore, liquid leaks can lead to water damage or in the worst case even to unintentional mixing of service water with other media, such as heating water.

Not a bottomless pit
Refilling cooling water constantly is not a solution in terms of effort and costs, refrigerant often cannot be refilled at all or can only be refilled by authorised service partners. More than that: Heat pumps are considered particularly climate-friendly because they do not emit any CO2 during operation. If the consumption of refrigerants not only increases, but it is also partially released into the environment, the intended environmental protection aspect becomes absurd. Financial support may then no longer be justified. Not to mention the fact that many buyers also opt for a heat pump for ecological reasons - this argument would then be omitted. It is therefore essential to avoid refrigerant and liquid leaks in heat pumps and to ensure through appropriate quality assurance in production that inferior heating appliances are not sold.

Trust in your own work is good...
... but it does not replace quality control. In order to avoid warranty cases, heat pump manufacturers and their suppliers should carry out reliable leak testing during the production as standard. Especially as the requirements are likely to increase due to the use of new or flammable refrigerants. Energy-saving systems usually consist of smaller, more complex parts and these are generally more demanding in testing than large, simple components. The typical tube distances of a heat exchanger, for example, have continued to decrease in recent years - making it correspondingly more difficult to detect and locate leaks.

The water bath is only suitable to a limited extent
Many traditional manufacturers still have a water tank and use the water bath method for leak detection in their production. Converting to vacuum or accumulation chambers that work with a tracer gas such as helium often seems too expensive at first glance. However, this is a fallacy, because the water bath method is ultimately far more complicated and also requires a long drying time. Moreover, the long-term trend in heat pumps is towards a more compact design. This is also problematic for leak testing in a water bath, because deeply installed parts can only be tested with difficulty. For example, if a bubble rises from a compact leaky test piece in a water bath, it may get stuck on another component, does not come off in the first place and the tester cannot detect it either.

Air testing and test spray also have their problems
Air testing also has its disadvantages. On the one hand, it is less accurate than the test gas methods in the vacuum or accumulation chamber, and on the other hand, it is far less reliable. Fluctuations in temperature and humidity can very easily falsify the results of the air test. A test spray might be another conceivable alternative. In the event that the testing body is installed, i.e. cannot be seen, the test spray is ruled out from the outset.

Balancing the cost-benefit ratio
Leak detectors that detect leaking tracer gases in a vacuum or accumulation chamber can be connected directly to control units in the production line, just like sniffer leak detectors. This automates leak detection. In the long term, this not only saves working time, but also ensures higher production capacities with better quality. The automated processes also ensure reliable results with very high repeatability. The manual and thus erroneous sniffing is no longer necessary. The detection limit and the speed of automated helium testing in the vacuum chamber are unsurpassed. However, a vacuum chamber also requires a certain amount of effort. Often, leak testing in the simple accumulation chamber can achieve a better balance between quality assurance and costs.

The recommendation: Testing in the accumulation chamber
The accumulation method has proven itself for years in the leak testing of heat pumps: The test object exposed to tracer gas under pressure is placed in a simple chamber, which must meet significantly less stringent sealing requirements than a vacuum chamber. Therefore, the accumulation method is much more cost-effective than vacuum testing. The tracer gas escapes from any leaks in the test piece and accumulates in the test chamber. The leak rate is calculated from the quantity of gas that accumulates within a defined time interval in the given volume of the test chamber. The time saving is particularly advantageous, because refrigerant and the various water circuits of a heat pump can be tested for tightness at the same time. Depending on the volume of the test object, an accumulation chamber can have a size of up to 1000 litres. The accumulation method detects leaks down to10-5 mbar∙l/s. Helium or forming gas (an incombustible mixture of 95 percent nitrogen and 5 percent hydrogen) serves as tracer gases. The accumulation chamber should be designed for each test object to ensure optimum gas distribution by means of fans and to keep the dead volume of the chamber low and accelerate the testing process.

Helium contaminated environments are no longer a problem
During the production of heat pumps, an increased concentration of helium can occur again and again in the production hall, which can negatively influence the sensitivity of measurements. But even then the accumulation method is still superior to the water bath. If the leak testing unit uses a mass spectrometer with an integrated turbopump as a sensor, it is also ideally suited for environments contaminated with helium. It makes sense if the leak testing is preceded by a simultaneous burst and coarse test of the heat pump. If the leak testing in the accumulation chamber shows that a test piece is leaking, a manual sniffer leak search can follow for exact location of the leak. It’s a fact: If heat pumps are to make a contribution to climate protection, it is essential that they reliably meet tightness requirements.
www.inficon.com