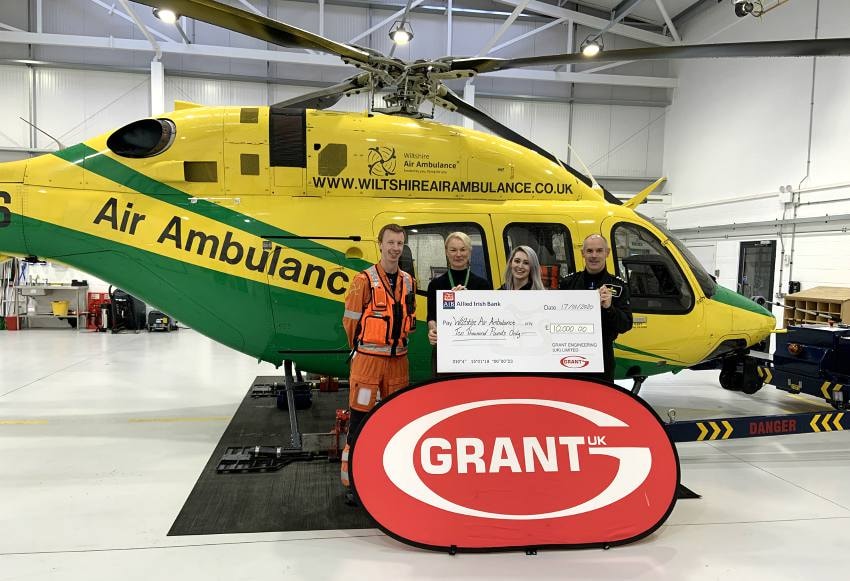 The charity, which is funded solely by donations, is based less than 10 miles from Grant UK’s Headquarters in Devizes and provides a vital emergency service within Wiltshire and the surrounding area, completing 1,233 missions last year.

Grant UK held a series of fundraising activities both internally and externally. These included ‘Food Fridays’, themed bake sales, dress up days and culminated with Grant UK’s annual staff raffle which took place before Christmas. The raffle raised nearly £700 alone thanks to ticket sales and the great selection of prizes, the majority of which had been donated by some of Grant UK’s suppliers.

In addition, some of Grant UK’s employees participated in external fundraising activities as well. This included some staff completing ‘Dry January’ and taking part in the White Horse Walk which is an event organised by Wiltshire Air Ambulance. Staff raised over £1,100 from these two events thanks to the generosity of sponsorship from colleagues, friends and family.

“We are thrilled to present Wiltshire Air Ambulance with this donation,” said Anna Wakefield, Head of Marketing at Grant UK. “2019 was our first year working with this local charity and it was great to learn more about the fantastic work they carry out on a daily basis. Charity fundraising has become a very important part of Grant UK with staff from all Departments getting involved. With the Wiltshire Air Ambulance being a local charity whose assistance may be needed by any one of us, staff have really got behind supporting this great cause.

“Grant UK is pleased to confirm that it will be continuing to support the Wiltshire Air Ambulance this year. 2020 is the 30th anniversary of the charity so it should be a busy year of fundraising to mark this milestone. Everyone at Grant UK is really looking forward to working closely with the Wiltshire Air Ambulance for another year and raising more funds to support its role in the local community.”