More than £30m of funding has been awarded to three heat network projects as part of a government package aimed at reducing the carbon footprint of UK homes and workspaces.

Heating homes and workspaces accounts for almost a third of all UK carbon emissions and the government says the new funding, through the Heat Networks Investment Project, means tens of thousands of homes, businesses and public buildings are one step closer to benefitting from greener, cleaner energy.

A heat network is a distribution system of insulated pipes that takes heat from a central source, such as a combined heat and power plant or heat recovered from industry and delivers it to a number of domestic or non-domestic buildings. They are a proven, cost-effective way of providing reliable low carbon heat at a fair price to consumers.

The Cory project will supply low carbon heat to 21,000 homes

A £12.1m package of government loans and grants is being made to the Cory project in the London Borough of Bexley. The funding has been awarded to Cory to support heat networks that will supply low carbon heat to 21,000 homes. Heat for the network will be drawn from Energy from Waste facilities run by Cory and is part of plans by Vattenfall to deliver low carbon heating to 75,000 homes across the Thames Estuary over the next decade.

Dougie Sutherland, CEO at Cory, said: “We are delighted that BEIS is supporting the development of one of the UK's largest heat networks. This is a very major step towards net zero, providing low-carbon heat for thousands of homes and businesses in Bexley and its surrounding Boroughs.”

Ken Hunnisett, project director at Triple Point Heat Networks Investment Management, said: “The Heat Networks Investment Project is entering its final year and what better way to do so than with the announcement of funding for a project of such tremendous scale and ambition. It will be a source of great pride for everyone involved to see the collaboration between Cory and Vattenfall fulfil its commitment to delivering affordable, reliable decarbonised heat to so many communities.” 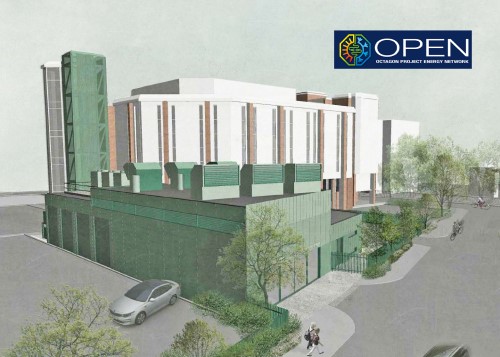 The OPEN project in Manchester has been awarded £14.7m

The Octagon Project Energy Network (OPEN) heat network will receive £14.7m in grants and loans for a scheme that plans to distribute low carbon electricity, heat and cooling to a range of buildings including Manchester University NHS Foundation Trust, major University buildings, a mix of over 1000 social housing units, student accommodation blocks, and commercial organisations. Heating will be provided by combined heat and power generation, which will be combined with power from solar panels and air source heat pumps.

Richard Everton, chairman of the Manchester Energy Partnership, said: “I am delighted that the tenacity and single mindedness of the MEPL team has turned what was a personal ‘pipe-dream’ into a financially viable and practical reality for the city of Manchester. The support received from both the local authority and central government is proof that multiple agencies can work together with the private sector to bring about infrastructure projects that will benefit communities, in pursuit of fuel efficiency and to reduce carbon emissions in our major cities. Manchester is taking a strategic lead in achieving ‘Net Zero North West’.”

Ken Hunnisett added: “This announcement marks a significant milestone on Manchester’s path to net zero. While the hard work is just beginning, the MEPL team and their partners have delivered an object lesson in managing a complex stakeholder base and have so much to be proud of. This project is a brilliant example of how a heat network can be developed within a city to deliver substantial economies of scale: serving a number of buildings and driving local economic growth all the while producing tangible, measurable benefits that will increase as the project evolves over time.”

Funding of £3.3m will see a first-of-its-kind project developed in Cambridgeshire that allows the village of Swaffham Prior to transition from oil to low-carbon heating, with 300 properties linked to a network using hybrid ground and air source heat pumps. With government support, Swaffham Prior Community Land Trust and Cambridgeshire County Council have created a collaborative community heat scheme that provides a blueprint model which can be replicated in other communities across the UK.

Sheryl French, programme director, Climate Change and Energy Investment, said: “This is a fantastic project and a first of its kind that we know of in the country. Retrofitting a whole village is a challenge but the Swaffham Prior Community Land Trust has been a great partner driving the project forward. Securing the funding is a huge step in creating accessible renewable heat for oil-dependent homes in Cambridgeshire. Cambridgeshire County Council is committed to tackling climate change and I’m looking forward to seeing the continued success of this project.”

Minister for Climate Change Lord Callanan said: "Almost a third of all UK carbon emissions come from heating our homes and addressing this is a vital part of eradicating our contribution to climate change by 2050. This funding package will accelerate the development of low-carbon technologies that will both reduce emissions, and ensure people’s homes are warmer, greener and cheaper to run.

"Securing a lasting move away from fossil fuels to heat our homes will allow thousands of households and businesses to feel the benefits of projects that are breaking new ground and making our villages, towns and cities cleaner places to live and work.

"Innovative projects like those this funding is backing are developing new and effective ways to use energy in homes and workspaces, which is helping to drive down costs and making low-carbon heat affordable and accessible for consumers as the UK transitions to a greener future.''

In addition to the £30 million for heat network projects, a further £14.6 million will benefit 11 projects in England, Scotland and Wales. The funding will be invested in exploring ways the UK can develop and use efficient, low-carbon technologies for heating and cooling buildings.

Projects include one being led by Durham University that is exploring whether water in flooded, abandoned coal mines could be used as a low-carbon geothermal source of heat. Another scheme from the University of Birmingham is looking at ways that electricity from renewable energy sources can be stored in times of low demand to meet requirements at peak periods and a further project being led by the University of Glasgow is aiming to develop the efficiency of air source heat pumps.

The funding announcement comes ahead of the publication of the government’s Heat and Buildings Strategy which will set out how carbon emissions in homes and workspaces will be addressed to meet legal commitments over ending contributions to climate change by 2050. The strategy is due to be published this year.