Leanne Gill is operations manager at Finn Geotherm, an award-winning Norfolk-based heat pump installer which was established in 2006. She explains how chance led her into the ACR industry and, almost 15 years later, why she still loves her job.

When I left school at 16, I went straight into a hairdressing apprenticeship. I didn’t really know what I wanted to do – I’d always fancied being an environmental health officer, but the opportunity to earn a wage and continue studying appealed to me so I took the hairdressing job and became qualified.

I decided I wanted a change and took an admin job for a food producer. It was good (I even met my husband there!) but with an hour’s commute each way, it just wasn’t suitable after the birth of my daughter in 2006.

I wanted to be closer to home and found a job nearby with a tree surgery company, who unfortunately went into administration shortly after I joined. Operating on the same farm was a new heat pump company – Finn Geotherm – set up a year earlier by David Alston. David was importing and installing heat pumps from Lämpöässä in Finland, having spotted a gap in the market (David is half Finnish and an engineering graduate). David was working out of a container unit in the scaffolding barn and had more work than he could deal with. I joined him in 2007 to answer the phone and do all the admin side of things while he installed the heat pumps.

At the time, I had no idea what heat pumps were. I’d never heard of them, but having learned more about them, I asked David to install one in my home – a 1970s bungalow which had no heating. The systems did sound a bit too good to be true but I soon saw for myself exactly how well they worked. We had no showroom for Finn Geotherm at the time and so used my house to show prospective customers a working system. They always wanted to run their hands under the tap check the water was actually hot!

We did a lot of county shows in the early days and spent a long time trying to explain to people what this ‘magic box’ actually did. Joining Finn Geotherm was a massive learning curve for me, but I was confident in the potential of heat pumps and I believed David’s vision for Finn Geotherm. I visited Finland to see Lämpöässä’s operations and trusted this long-established brand, which had a great track record. If you can heat a home using a heat pump in Finnish winters, you can heat anything anywhere! We still install Lämpöässä systems today.

As the industry evolved and Finn Geotherm grew, I’ve had to tackle more regulations and get to grips with managing increasingly complex projects. There was no MCS or RECC initially so we’ve had to follow new regulatory bodies as they have come in and adapt our business accordingly.

It's amazing when I look back at the 6kW systems we started installing in the early days at Finn Geotherm compared to our latest 630kW heat pump project, more than 1000 installations later.

My current role as operations manager includes ordering and managing raw materials, equipment and labour for every one of Finn Geotherm’s installation projects. I also look after the vast majority of personnel admin for the company, as well as being responsible for managing all the required accreditations including MCS and the company’s quality management system. With ongoing changes to payroll, customs declarations, health and safety regulations, it’s essential I keep the company up to date. I completed my AAT Level 2 qualification in accounting in 2016.

Finn Geotherm continues to expand, with 2021 set to be our most successful to date. We are currently undertaking 21 large scale heat pump projects in the public sector using some of the biggest capacity systems in Europe, in addition to the day-to-day commercial and domestic installations. With an extensive amount of planning needed to keep everything moving along nicely, I am hoping to devote more time to pre-planning each project and be able to delegate other aspects of my role to new colleagues joining the business.

I love this job. No day is the same. Every project is unique and has different requirements. We’re genuinely making a difference to people’s lives and, at the same time, we’re doing our bit to help the environment which is crucial right now. The large scale projects we’re currently working on are really exciting and cutting edge – no one has installed such large ASHPs on tower blocks before – so it is brilliant to see us leading the way. Going green isn’t just about electric cars now – switching to renewable heating makes a real difference as buildings account for such a large proportion of carbon emissions.

During almost 15 years at Finn Geotherm, I think the market has changed most significantly in the past 12 months. Demand has rocketed as people are keen to take advantage of the RHI scheme before it ends, the Green Homes Grant and now the Boiler Upgrade Scheme. It is so nice to see that consumers now have a much better understanding of heat pumps. Awareness and opinions have really only changed very recently. Before, there was no talk of ground or air source in the media or the funding available to help people switch – it was all about biomass and solar. Now, we’re pushing against much more of an open door.

My role has also become more challenging in this time though, as the cost of personnel and equipment rise. Prices are changing week on week and we’re working to long and often changeable lead times caused a shortage of components. Planning projects to budgets and deadlines is incredibly hard as these are constantly changing, due to factors including Brexit, Covid and a surge in demand.

Guy [Ransom], our commercial director, told me a few years ago: ‘When you are faced with a beehive of challenges, tackle one bee at a time’. This advice has definitely stood me in good stead for this job!

One of the main challenges both Finn Geotherm and the industry as a whole are facing right now is a shortage of skilled installers. College courses continue to focus on fossil fuelled boilers and so any new recruits at Finn Geotherm may have the basic plumbing or electrical engineering skills but still have to be trained up on the specifics of heat pumps. I look after all the labour planning for our projects and it’s not an easy task to juggle huge projects with limited resources.
With the introduction of fixed rate, low level grants for heat pump projects from next year, it’s likely more ‘one man band’ installers will appear in the same way as with solar PV. Installations will increase in number but not necessarily with all the right assessments being made to size the heat pumps to suit the property’s and owner’s requirements. I’m a stickler for standards and it’s vital that these are maintained so the reputation of companies such as ours aren’t tarnished by the unsatisfactory work of others. We’ve worked really hard to get to where we are and I am proud of what Finn Geotherm stands for.

When I first started in the industry almost 15 years ago, it was very male dominated. People would talk straight to the company’s male directors and builders always bypassed me, until they realised I actually knew what I was talking about! It took a while to shift some of these perceptions but I have now built great, long-standing relationships with customers and suppliers. I think general attitudes to women in this sector have definitely changed and the industry is more welcoming and inclusive. Before, I’d be perhaps the only female at an ACR awards do but these days, it’s great to see women accounting for 20 – 30 per cent of attendees.

I would recommend this industry to anyone. There are so many roles to choose from and women can do any of these. It’s just a case of pursuing what you want to do to suit your interests and skill set. Heat pumps are going to become the norm for UK homes and the sector needs more skilled people to specify and install them. The jobs are there and these are definitely jobs for life! 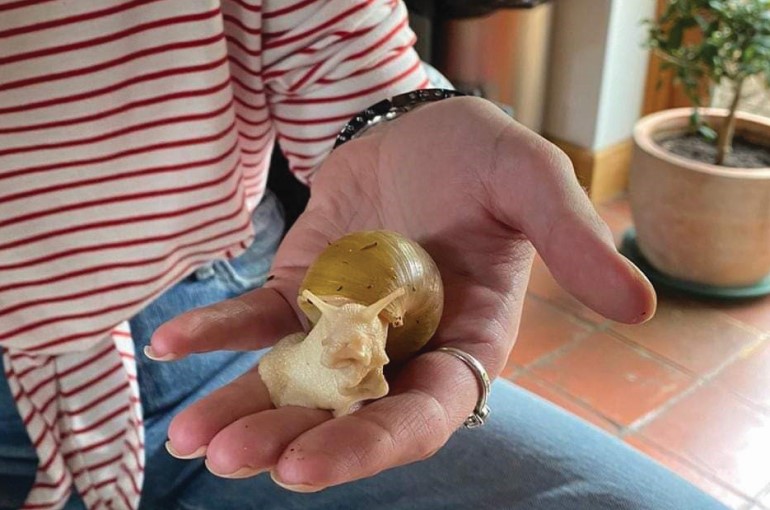 When I’m not at Finn Geotherm, I’m massive history geek and I love reading all things related to the French Revolution and Napoleonic Wars. I also have a pet albino African land snail called Slim Shelldy (named after rapper Eminem!). My stepdaughter’s just had a baby too so I’m getting used to being Nanny Le-Le!

Having just moved into an 1870s house which needs total refurbishment, heating is one of the many jobs I’ll be getting sorted as part of the renovations. I’ve got the team at Finn Geotherm on standby to install my heat pump…