Juliet Loiselle is publisher of the ACR Journal and editor of Heat Pumps Today.

I started in the HVACR industry 19 years ago, when we purchased ACR Today magazine. It was a heady time in the industry and the press were forever out and about on launches and visits. There was much to write about, advertise and demonstrate in those days.

At the time, I was the advertising manager of ACR Today and spent 12 months sitting in front of the movers and shakers of the industry to try and understand the wants and needs of our readers and advertisers. Subsequently I realised we needed to differentiate ourselves… the time was right to rebrand as ACR Journal.

We became known as 'friends of industry'. I joined committees, attended every event I could and started to implement processes where we could be more supportive of the industry. I joined the BSRA (Birmingham Society of Refrigeration), followed by the IOR, and in later years was elected on to the IOR Dinner Committee and voted on to the Board of Trustees. More recently, I have been appointed a director of ACRIB.

We support FETA with their annual luncheon and, of course, IOR Scotland with their networking events, along with other regional bodies/associations like the HRS (Hampshire Refrigeration Society).

During those first 12 months I knew that I would always want to be in this exciting industry. I set my sights on achieving the publisher role within five years, achieved this in four, and have not looked back.

We identified that heat pumps needed to come to the fore and launched Heat Pumps Today magazine and the National Heat Pumps Awards. Suffice to say, the government did much damage to the sector not long afterwards with the implementation and subsequent withdrawal of the RHI (Renewable Heat Incentive).
A big focus was also the promotion of training. 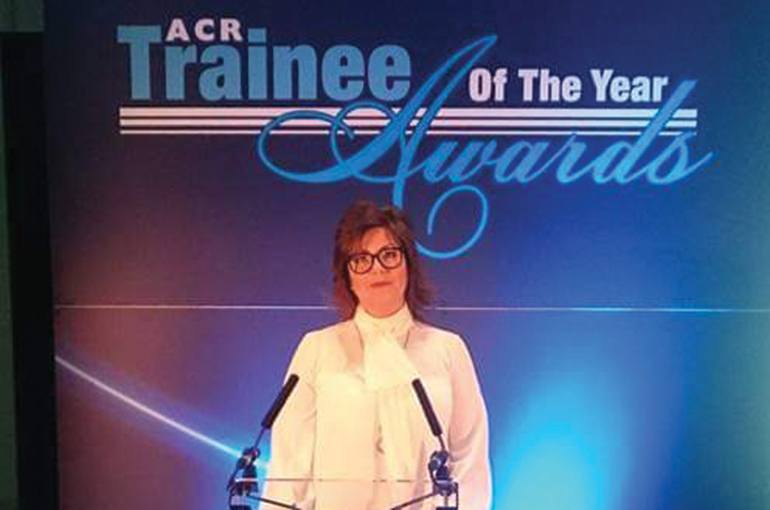 Presenting the ACR Trainee of the Year Awards at The Belfry

It became apparent that we were on the verge of a shortage of new recruits to the industry, especially with 'on the tools' trainees/apprentices. I was asked if I would consider running an apprenticeship luncheon. My caveat was ensuring it was a not-for-profit event and all profits made went back into training. This event was subsequently launched at The Belfry, Sutton Coldfield, and was fondly referred to as TOTY (Trainee of the Year Awards).  We gave back to industry in excess of £60,000 over a 10-year period.

Further to this, after some investigations and discussions, we have now picked up the mantle and organise the RACHPskills UK competition in conjunction with WorldSkills UK.

I was also proud to be involved with the launch of the Women in RACHP network, introduce the Women in ACR articles for ACR Journal and, of course, select the ACR Woman of the Year at the National ACR & Heat Pump Awards.

A lot of my spare time is taken up with my son, grandson and friends. I’m also very sociable, a good thing with this industry. Being outdoors or travelling rates in my Top Ten of things to do. Kalkan, Turkey, and Thailand are two of my favourite holiday destinations and I now strive to visit both annually.

For any women who are new to the industry, I would say learn as much as you can, embrace each opportunity as it comes along and befriend like-minded people in your and other organisations. This industry is very proactive for promoting diversity and if you show willingness and are keen, you will enjoy it. Also, do join the Women in RACHP group via LinkedIn, you will be very welcome.