Load diversity is an engineer's decision 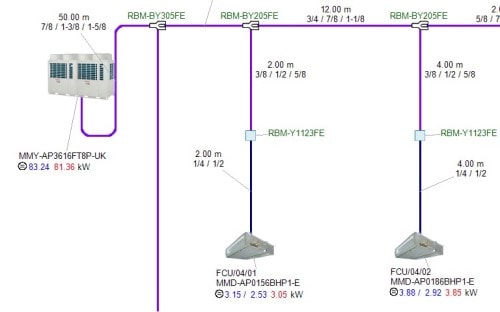 ADVERTORIAL: On larger VRF projects we are often asked about connection ratio and diversity. Unfortunately, they are often confused as they are not the same, says Andy Bradison, regional specification manager at Cool Designs Ltd.

Connection ratio (outdoor unit to indoor unit per cent) is not diversity. It’s an equipment imbalance that produces a result. For example, 96kW of indoor units may be connected to 80kW of outdoor units shown and as 120 per cent. The duty that system produces however, is the duty that that system produces (80kW) - no diversity exists in that matched system at 120 per cent connection ratio.

The selection software considers the system loading (fan coil units), the design conditions for indoors and outdoor units and accurate piping lengths to give true duties at the FCU (not nominal). This example 117per cent connection.

Duties shown in blue are nett total and sensible duty 100 per cent (no diversity). They are steady state i.e. all FCU running.

As with life, once the facts are known we can make decisions.

`Hevacomp` or similar load programme can produce an accurate list of required loads. These are peak loads for the individual FCU. It is rare that all these duties will be needed at the same time.

The computer programme can also give a CONSEQUENTIAL load – as an example in the shown system of, say 70kW.

Meaning at any one time, through the occupied day, only 70kW cooling will ever be needed, yet we have installed 83kW. For example, people move around a building, the sun`s aspect changes through the day therefore load can be fluid. `You can`t be in the canteen and at your desk`.

We therefore look at each FCU/zone on its merits. To the discern of the engineer, it is practical at times to look to 10/15 per cent reduction in FCU blue - eg – if 2.75kW sensible is needed on the `peak list`, we may put in a model MMD-AP0156BHP-E (2.53kW steady state) as we know the FCU will ramp up towards its maximum as load need fluctuates.

Providing the resultant total of blues, is larger than the CONSEQUENTIAL load, then that is often acceptable.

Load diversity, therefore, an engineer's decision, considers the specific building, its uses and takes
into account constant load and variable/flexible load, so the correct equipment sizing is installed.

Never mind the fact, after the year we`ve all had, at 28 or 30oC outside, we will all be at the park.