A CGI of the reception area at 77 Coleman Street

The system from AET Flexible Space makes use of the void within the building’s raised-access floor, and so removes the need for traditional ceiling-based services and suspended ceilings. By using the existing 270mm floor void, the design team were able to preserve and highlight key architectural design features, including a unique terrazzo-patterned soffit. 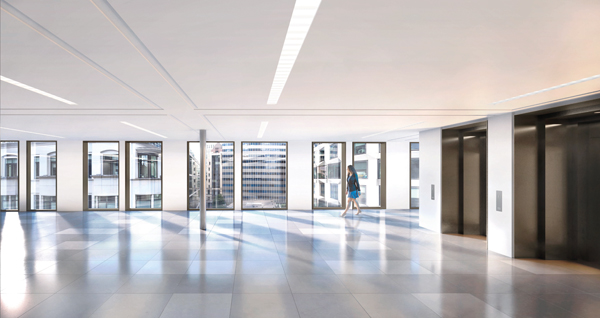 AET worked with both the M&E consultant, The GDM Partnership, and architects Buckley Gray Yeoman for over three years on the application and specification of their  underfloor air conditioning before receiving the order from the appointed M&E contractor, Designer Group.

The development is now in the final stages of completion and the CAM-V system has been installed across all seven floors of office space. Each floor is served by four CAM units, and the conditioned air is delivered into the space via 48 floor-recessed Fantile units, eliminating cold draughts and providing the end user with complete control over temperature and air flow.