Arctic Circle, with 36 years of experience in introducing innovative technology to the industry, was approached by Emerson Climate Technologies in September 2018 to collaborate for a new CO₂ scroll compressor technology. Emerson identified Arctic Circle as a development partner as it has an industry-leading engineering team coupled with a long-standing history of working collaboratively with end-users to introduce pioneering products to market. The Natural Refrigeration Technology Centre (NRTC) at Arctic Circle also presented an opportunity to ensure that the system was proven before being placed on a live site.

It was agreed that Arctic Circle would manufacture a transcritical booster system to be installed in the NRTC for testing and concept demonstration. This development system was installed in the NRTC in July 2019 after a complex multi-disciplinary engineering design. Intensive testing took place, including modelling seasonal UK ambient temperatures and varying load profiles to demonstrate the efficiency improvements offered by enhanced vapour injection. Its inclusion allows similar efficiency benefits of a parallel compression system without the additional cost and complexity. Data was captured and fed back to Emerson to refine the technology before the product moved to field trials.

The Co-operative Group was the natural choice for a field trial of the technology.  In 2017, the Co-operative Group committed to replacing their vast HFC based refrigeration systems with new CO₂ technology. Typically, stores in the Co-operative Group's estate are in locations where the footprint and noise of the refrigeration system are essential factors. These challenges, in recent years, would have needed to be prioritised at a higher cost for any project. The Co-operative Group was interested in trialling the technology; however, they identified several risks that would need mitigating before approval. To overcome this, a detailed risk mitigation and contingency plan was put in place. This involved critical components that were made available in stock at Arctic Circle, a complete standby system available as a backup in case of system failure and a final failsafe of a conventional semi-hermetic booster system available in case of catastrophic failure of the system. Arctic Circle also agreed to take full responsibility for the design, manufacture, installation, and service of this system which enabled the project's secrecy while also ensuring trailing the technology was carefully managed.

With the plan in place, it was agreed that the field trial could move forward. An independent consultant was introduced to ensure the new scroll technology seamlessly fell into the store's design; Abbey Design Associates carried this out. The overall proof of concept required some control interface since Emerson wished to apply their Dixell operating platform with a proviso for remote monitoring to be accommodated using Co-op’s preferred RDM equipment through its Technical Services Bureau. 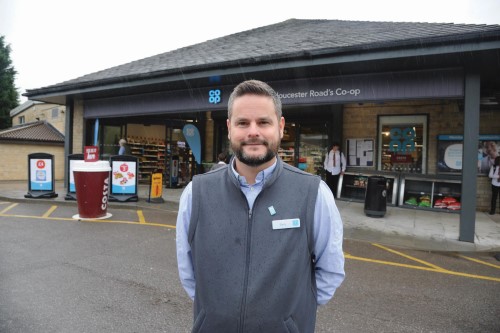 The Co-op engineering team quickly approved the design, and the installation was completed at Co-op Malmesbury Gloucester Road in an 8000 ft2 food retail outlet which was undergoing significant capital investment at that time. The Wiltshire store is now home to the world's first field trial, consisting of six compressors, delivering a total of 68 kW of medium temperature load at -8°C saturated suction temperature (SST) and 10 kW of low-temperature load at -32°C SST.

A recent analysis by Emerson of the new technology has shown between four and eight per cent seasonal efficiency gains in typical European ambient temperatures.

For this site, noise levels were a key consideration, with residential housing less than 10 metres from the plant area. The plant selection criteria stated a noise level of no more than 30 dB(A) at 10m, which is very challenging using conventional semi-hermetic booster technology. However, the new transcritical scroll technology and the Arctic Circle system design achieved this with ease.

Commissioning and installation were carried out by CG Refrigeration and overseen by the Arctic Circle technical services team and Emerson technical representatives. During commissioning, the team adjusted the compressor envelopes, adjusted the cabinets' superheat settings, and monitored oil return behaviour to ensure the correct system set up.  After the successful commissioning, the site passed its six-week proving period with no alarms and no works orders raised. The system was then handed over to Arctic Circle's maintenance providers, CG Refrigeration and Ryan Jayberg. The site was continuously monitored and reviewed during its life to optimise system performance and provide feedback to further the compressor development. In addition, the systems development compressors were periodically replaced and sent back for inspection for wear and to further develop the future system efficiency.  The compressors were finally replaced with full production models in June 2021. As a result, as part of an 18-month field test, the systems were constantly monitored, adjusted, and provided feedback on system performance. This enabled Emerson to fast track the development of the transcritical scroll technology and be brought to mass production much sooner than previous compressor developments. 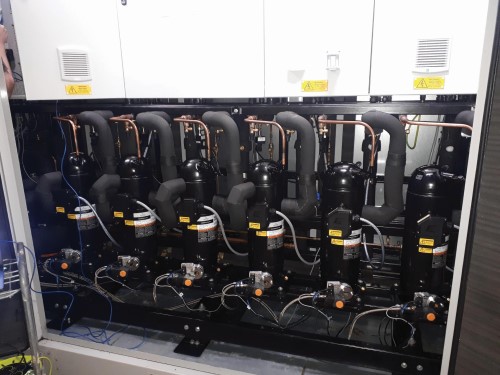 This product has the potential to revolutionise the market in small to medium-sized retail applications. The benefits of having lower noise levels, smaller footprints and less weight than semi-hermetic compressors make it the perfect choice for convenience stores in urban areas where space requirements are limited and noise restrictions are very tight. The possibilities for enhancing system performance through using Emerson's Copeland CO₂ scroll technology are vast. Offering a significant life-cycle cost improvement and a physical footprint and noise level reduction versus conventional technology.  There are endless possibilities around maximising the potential of this technology across a whole host of applications.

Adrian Crowther, engineering design and standards manager – refrigeration, Co-op, commented: "With lower noise level than reciprocating compressors, this brand-new CO₂ scroll technology ensures that the most stringent noise levels can be achieved. With so many urban store locations, this is especially important for the Co-op. The noise level of the running system was so low that I asked, 'is the unit actually running?' when first entering the plant enclosure. The Co-op is extremely proud to have been able to facilitate this enterprising technology, which is probably the most well-kept secret in recent times when it comes to new refrigeration solutions design. The plant has performed admirably during the past 18 months and to now have the factory manufactured versions is a significant step forward from the initial prototype development. The compressors are very compact and offer a smaller footprint plant design as available space is at a real premium for The Co-op".

Mike Gittoes, managing director, Arctic Circle, said: "When Emerson approached us as a partner to trial this new technology, we were excited about the opportunities this would present for system design innovation. This technology will become a real step-change for innovation in the industry and will also lend itself well in the future to integrated heat recovery or standalone heat pump applications. This is due to the enhanced vapour injection technology enabling increased system efficiency at elevated gas cooler pressures allowing the system to raise head pressure to generate heat effectively while minimising the penalties for transcritical operation. Traditional scroll compressor technology has been an industry benchmark for years for small retail applications. The evolution of scroll technology to transcritical CO₂ will deliver great benefits like increased efficiency, lower noise levels and enable smaller systems. As soon as this technology is available for full commercial release Arctic Circle and Emerson are confident that it will be adopted and rolled out across the small to medium convenience retail estate."