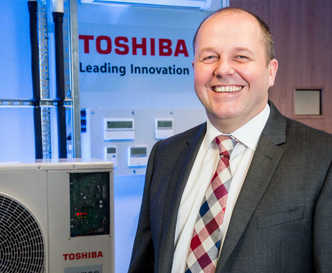 It is supporting the initiative with the launch of innovative new air conditioning products, such as its latest SMMS-e VRF system, increased UK stocking levels, a major expansion in worldwide production capacity, plus its roll-out of a UK network of training centres and a new global training facility.

Stock levels at the company’s Plymouth site are being increased dramatically with the addition of a further 44,000 sq ft of racking space, ensuring immediate availability across all popular ranges of Toshiba split and VRF air conditioning. 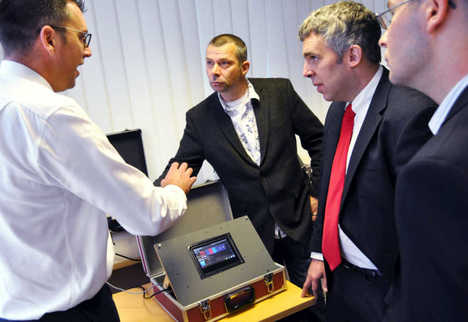 Technical discussion on Toshiba's new control system
Investment in research and development is also being significantly increased, both in the UK and globally, with Toshiba’s main factories taking on an additional 350 design engineers. This will enable the company to fast-track the development and introduction of innovative air conditioning technologies in the future.

A major extension to Toshiba’s advanced Thailand factory is under way, including expansion of its world-class research and development facilities, due for completion later this year.

This includes creation of a new global Technical Training Centre, with capacity to train 150 delegates at a time, equipped with Toshiba’s full range of air conditioning and control technology. This joins Toshiba’s award-winning network of training facilities, covering the UK and Ireland, and puts the company in the forefront of air conditioning training providers.

On a corporate level, the planned growth is supported by the Building and Industrial System (BIS) group within parent United Technologies Corporation, bringing together amongst others Toshiba Air Conditioning, Carrier Air Conditioning, Chubb Fire and Security and Otis, the lift specialists. 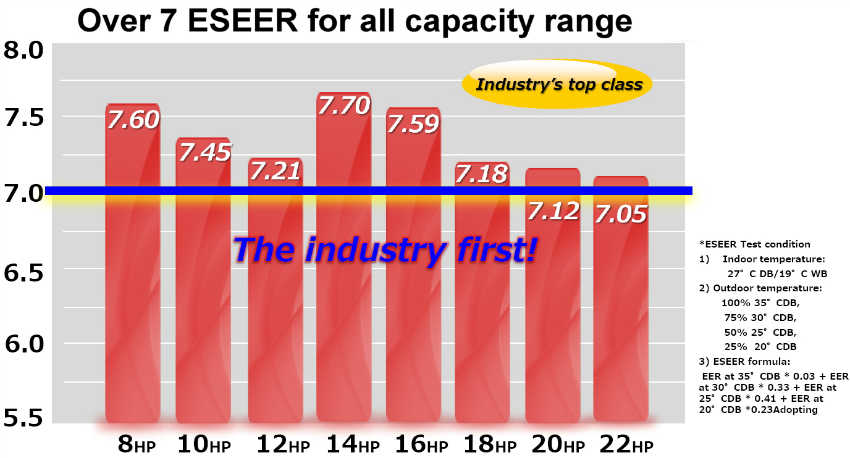 Above ESEER 7 across the Toshiba range
The latest generation of Toshiba’s market-leading VRF air conditioning, the SMMS-e, was launched at Twickenham last month, alongside the opening game of the Rugby World Cup 2015. It sets a new industry benchmark for energy efficiency, heating performance and a revolutionary “no-contact” wireless commissioning system.

At its heart is a new dual vane twin rotary compressor, developed and manufactured by Toshiba, which uses a two-stage compression process for improved efficiency and performance. Wear surfaces on compression vanes are treated with a high-tech Diamond-Like Carbon (DLC) coating, giving outstanding hardness, wear resistance and reliability.

It enables a significant increase in compressor rotation speed, resulting in a higher displacement volume – up to 50 per cent greater than for the previous generation of VRF systems. The enables a higher capacity to be obtained from a smaller compressor, with less power consumption.

The system’s heat exchanger has been completely redesigned, using smaller diameter tube arranged in three rows in the coil, compared with two rows in the previous model, resulting in a 13 per cent increase in surface area available for heat transfer, further improving performance and efficiency.

The capacity of the new generation heat exchanger, previously fixed, can be adjusted to match the current load and ambient conditions. The three-way variable heat exchanger enables the VRF’s control system to automatically select the optimum setting.

The SMMS-e is notable in being able to provide continuous heating, with no requirement to stop during defrosts, or having to use energy to charge other components as with alternative systems. This is made possible by the use of a new hot-gas bypass control, which simultaneously defrosts outdoor heat exchanger coils, while allowing the indoor unit to continue operating in heating mode.

“SMMS-e is Toshiba’s latest and greatest VRF system to date. It embodies some important technical developments, not least on the compressor and controls front, which extend efficiency and the application envelope for VRF even further into new territory.

“While end users benefit from reductions in running costs and enhanced comfort conditions, installers can take advantage of the new wireless commissioning and diagnostics system, which reduces installation time and opens up new possibilities for fast data exchange – without laying a finger on a unit. We believe the SMMS-e takes VRF technology a great leap forward, and is set to be a winner.”

A key element in the growth plan is to continue to build on and strengthen Toshiba’s distribution network, in both the UK and Ireland. This includes continuing to support and invest in existing distributors, while fostering the development of new initiatives to make Toshiba products available to new and existing customers.
Content continues after advertisements