The Importance of Leak Detection

A-Gas Managing Director John Ormerod on why leak detection is playing a wider role in the lifecycle of refrigeration and air conditioning systems.

At our offices in Portishead, near Bristol, an ancient 10 horsepower 28 kW Daikin VRF air conditioning system was running on R22 and needed an upgrade to comply with the ODS Regulations. If you follow social media you will know that R22 is still posing problems for many engineers and end-users even though it has been phased out.

The system at A-Gas, with ten separate air handling units containing 16.9 kilograms of refrigerant, was used to heat and cool the first floor office areas. 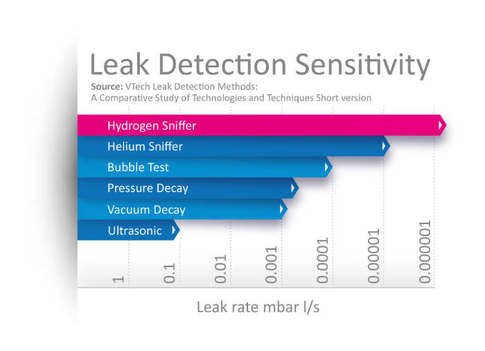 In the first instance, we considered a replacement system but this was going to cost in the region of £30,000. We looked again at the project and saw that a retrofit offered an alternate way forward. By using the Trace-A-Gas® leak detection system, a five per cent hydrogen and 95 per cent nitrogen mixture from A-Gas, we were able to get to the heart of the problem.


This enabled us to locate the leak and find evidence of former leaks. We made the repairs, retested with Trace-A-Gas to make sure all was okay, evacuated the system and recharged it with R438A which has low Global Warming Potential (GWP) values. The system is now up and running as it should be and we have saved a lot of money into the bargain.

In this instance the use of leak detection also bought us time. Because of where we are in the F-Gas legislation it gave us the opportunity to wait until the major manufacturers bring out R32 as a refrigerant for air conditioning – rather than use R410A which we will ultimately have to replace anyway – so we can get to a point where we can replace it as we would like.
Content continues after advertisements

In recent years there have been significant developments in leak detection. It’s hard to believe but some still think that spraying soapy water is all that is needed to detect any leak. In fact such an operation will only detect large leaks. Advanced technology is already with us and Trace-A-Gas, a valuable tool for any retrofit when used with an electronic leak detector, can find leaks smaller than 5g per year.


Improved leak detection forms part of a rethink on the lifecycle performance of systems. The lifecycle of a system should now be the key factor for customers and engineers, and the industry is being forced to look at a more holistic approach to managing refrigerant use.

As a result of this, sales of reclaimed refrigerant are on the up – and besides improved leak detection – there are better installation and work practices and equipment is more efficient in its use of energy. Enhanced equipment design and improved training for contractors and skilled technicians is also contributing to this. In the UK, leakage in modern air conditioning systems has been cut drastically compared to the levels of 15 years ago and I expect this to continue.


Original Equipment Manufacturers (OEMs) are also raising their game by producing better components which deliver more efficiencies. The industry is now more focused than ever on leak detection and this shows that we are beginning to get our act together with a more sustainable approach to working practices.