The Importance of Insulated Pipe Brackets

Here, Anthony Barnett, Technical Marketing Manager at Armacell, looks at why insulating brackets correctly in a heating and cooling system is just as important as the pipework itself.

​Figure 1: Depending on the pipe diameter, the heat loss from an un-insulated pipe bracket (shown on the left) can be equivalent to that from up to 1m of un-insulated pipe (Illustration: Armacell)
​Here, Anthony Barnett, Technical Marketing Manager at Armacell, looks at why insulating brackets correctly in a heating and cooling system is just as important as the pipework itself.
​The thickness of the insulation material used for pipes and fittings must obviously meet minimum regulatory requirements. However, in some situations there may be other factors to consider, for example, if there is an increased risk of legionella because the hot and cold pipes are laid in the same duct or water does not circulate regularly, it may be necessary to use what is known as 100% insulation.

This is where the thickness of the insulation roughly corresponds to the outer pipe diameter. That would mean if the pipe diameter is 22mm, the 100% insulation thickness would also be 22mm. On hot drinking water pipes this not only prevents legionella, but protects the pipes against unnecessary energy losses. For cold water pipes, this approach protects against freezing in cold weather as well as providing protection against unwanted temperature rises.
​However, in some systems the pipe supports are often overlooked, which can result in significant energy loss. A thermal heat flow calculation for a 60°C hot water pipe in continual use showed a heat loss of 0.06 w/k per bracket (on a 26.9mm diameter copper pipe with a 27mm insulation thickness).

This can have a major effect on total energy costs of running a system especially where multiple supports are used. The only effective way of achieving a reliable connection between the clamps and an elastomeric insulation is encasing the PUR/PIR clamp with insulation as shown in Figure 2. 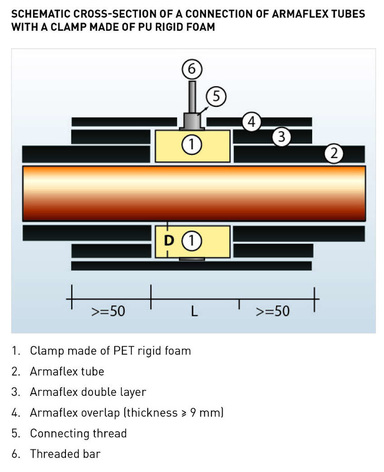 Figure 2: Enclosed pipe support join with elastomeric insulation material and a PUR/PIR clamp
​Aside from using 100% insulation and adequate pipe support brackets, the type of insulation material used has a bearing on overall system performance. One of the most effective materials is closed-cell insulation, which has a high resistance to water vapour diffusion, making it ideal for use on cold systems where condensation is likely to occur.

By preventing moisture ingress and providing no ready food source, closed cell insulation discourages the growth of microbes, which makes it particularly suitable for using in sectors such as food and beverage where hygiene is important. Ranges such as our AF/Armaflex Class O closed cell insulation have an additional anti-microbial protection built in, giving active protection against microbial growth.

Conversely, open-cell materials, even when used as a 100% insulation and whether specified with or without a vapour barrier, won’t sufficiently prevent moisture ingress as a result of diffusion. This means that there is a danger of water vapour saturating the insulation material.

As the material becomes damp, its thermal conductivity increases and insulation properties deteriorate, causing greater energy losses, and a greater likelihood of inefficiency, condensation and proliferation of mould and bacteria.

​In certain applications, 100% insulation can be a highly effective method of ensuring the health of the building occupants as well as maintaining efficiency of the system.

However, not only the pipework but the brackets should be properly insulated and, preferably, with a closed cell material.  Bear in mind, too, that pre-lined pipe clamps may not be adequate - a complete insulation system approach is often best. This is where the insulation material and insulated pipe supports are sourced from the same supplier, which offers greater compatibility in terms of condensation control, fire behaviour, energy saving and ease of installation.
Content continues after advertisements