The importance of comprehensive humidity management Managing humidity has long proved a year-round challenge for facility managers across the nation, with a recent rise in extreme weather conditions only serving to compound this issue further. However, without an adequate dehumidification system, operators may invite the risk of retaining residual moisture, which may pose a threat to materials and electrical devices. Matt Watson, moisture control expert for Aggreko Northern Europe, discusses best practice for humidity remediation in a production environment.

As any facility manager will tell you, humidity within a plant is at best a minor nuisance, and at worst a major threat to equipment. High humidity levels can generate moisture, which is a leading cause of arcing and even failure in electronic devices, with 53% of machinery downtime able to be attribute to internal faults.

Statistics from Oneserve indicate that downtime costs UK manufacturers £180bn per year, illustrating the impact that humidity can have on productivity if left unchecked. Moreover, with heavy rain almost synonymous with the UK climate, this is a problem that will continue to persist for the foreseeable future.

While humidity risks are most commonly associated with extended periods of wet weather, it is important to recognise that this challenge is not exclusive to rainy winter months, and that moisture management remains a round-the-clock responsibility. Summer temperatures can trigger thermal expansion, granting the air a higher capacity for moisture, despite relative humidity readings showing a lower percentage.

This challenge is one that has been exacerbated by recent periods of extreme weather in the UK, with Storms Dudley, Eunice and Franklin only the latest in a growing list of occurrences. When the effects of thermal expansion are also considered, it is clear that even dry spells offer no solace from the ongoing threat of moisture damage within a facility. With severe weather conditions seemingly an increasingly common phenomenon, there has never been a greater need to ensure that proper humidity management techniques are employed to avoid damage to plant electronics and materials.

To effectively deal with moisture, it is first necessary to understand the forms in which it may present itself. Moisture that poses a risk to materials is most commonly referred to as ‘free’ – able to rest on and be absorbed into walls, floors and objects – as opposed to the moisture chemically bound within the building materials themselves.

There are four primary causes of moisture build-up in diffusion, evaporation, ventilation and emissions. Diffusion concerns water vapour entering the building through cracks or being absorbed into the building’s structure itself, while evaporation refers to any water introduced to the space that may later evaporate and contribute to the moisture in the room. This can be through a variety of means, including water intended for cleaning, or the cooling of hotter objects that have been brought into the facility.

Ventilation can prove both intentional and unintentional. Leaving windows and doors open allows the outside air to permeate the building, bringing with it humidity. Conversely, an ineffective ventilation system will not be able to cope with the high level of moisture in the space, allowing the humidity in the room to remain high. Lastly, it is important to consider the emissions of both humans and machines with facility, which release moisture into the air through breathing and exhaust fumes respectively. 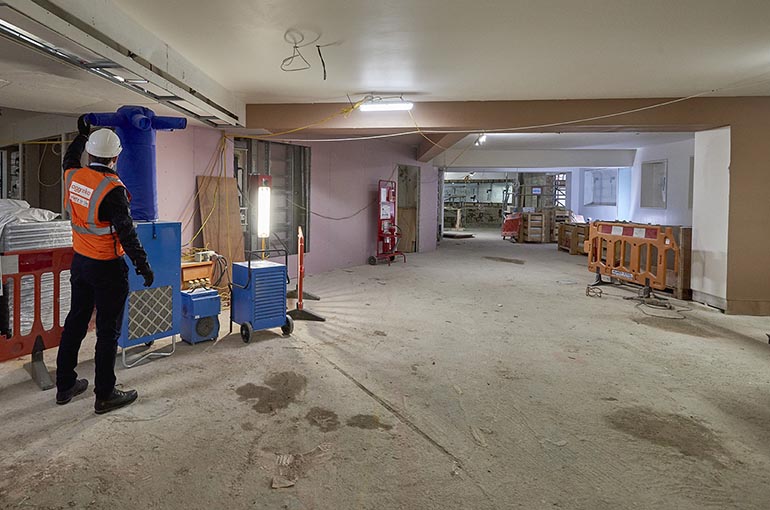 One of the common mistakes when dealing with moisture is to vigorously heat the space in an attempt to encourage the water to evaporate. However, as explained earlier, this only causes the air to expand, increasing its capacity to retain moisture. Ultimately, this proves counterproductive to the original goal, as after as little as 48 hours this moisture will return from the air back into the materials it was drawn from. Moreover, this approach of ‘blast heating’ remains largely ineffective at removing deposits of moisture in small crevices, which are a leading cause of corrosion and damage in electronic devices.

While heating is certainly a key element of moisture removal, it must be coupled with effective air circulation and dehumidification techniques to comprehensively remediate the affected area. Heating the space causes water molecules to be drawn from local materials into the air, which is circulated using fans.

Two dehumidification methods can then be used to remove moisture from the air, in the form of either a desiccant or refrigerant system. The former will draw the moisture over a desiccant wheel, drying it and expelling as water vapour, while the latter will draw the air over a coil while reducing its temperature using a refrigeration system. This allows it to condense, meaning that moisture is able to be removed from the environment in the form of a liquid.

These approaches are by far the most comprehensive methods of moisture removal, crucially addressing stubborn deposits of water wherever they may occur. For maximum effectiveness, facility managers may want to consider pairing with a temperature management specialist such as Aggreko. With their industrial dehumidifiers possessing airflow capacities up to 7,000 m3/hr, they can ensure that even the largest plants and factories are immune to the dangers that humidity can bring.

With the hidden risks of humidity outlined, it is clear that moisture management is a year-round responsibility for building operators. Moisture comes in many forms, and can prove a serious threat to equipment and electronics if left unchecked. With such a narrow margin for error, it is critical that facility managers opt for comprehensive solutions when looking to undertake moisture remediation within the plant environment. For this reason, facility managers may want to consider outsourcing their temperature control to specialists such as Aggreko for maximum security against moisture damage.