The World Guide to Transcritical CO2 Refrigeration was published as a free-to-download resource in July, followed by a live webinar on to discuss the findings. It showed how the number of installations globally increased from 140 in 2008 (all of which were in Europe), to an estimated 35,500 today.

As the use of transcritical CO2 refrigeration systems continued to increase at an exponential rate, it became apparent that there was a great need for reliable information from a neutral source. As such, shecco’s Market Development team (sheccoBase), undertook an extensive market study in the first half of 2020 to analyse the current state of the global industry and various trends.

As a market accelerator for clean cooling and natural refrigerant technologies, shecco (also publisher of R744.com) has been collecting information and writing about CO2 installations for the better part of the past two decades. The number of installations has been growing steadily over this period as industry finds innovative ways to realise the potential of CO2, even in warmer ambient climates previously thought incompatible with transcritical systems.

sheccoBase conducted an extensive data collection exercise during the first half of 2020 with manufacturers of CO2 refrigeration systems. The aim was to quantify the number of transcritical CO2 installations worldwide. The companies were asked how many transcritical CO2 installations they have completed to date. Furthermore, they were asked to differentiate between the applications convenience stores (<400m2 [4306ft2]), supermarkets (>400m2 [4306ft2]), industrial refrigeration installations; ice rinks; and data centres.

When we first started collecting data in 2008, we only counted 140 transcritical CO2 systems – all of which were in Europe. (As we only count only complete installations, it’s important to note that the number of actual individual CO2 systems are much higher as the larger projects often have more than one system.) Today, this number is fast approaching 40,000 globally as the accelerated phase down of harmful synthetics drives the search for a more climate-friendly alternative. This growth is most noticeable within regions such as Europe, the U.S., Canada, Japan, Australia, New Zealand, and South Africa. 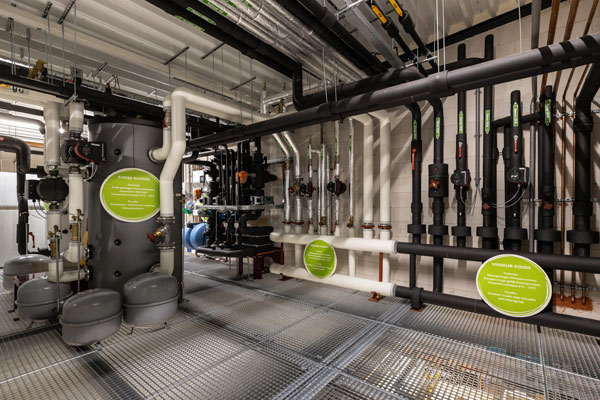 Refrigerated cabinets at the new Lidl Zero on Woerden, Netherlands, are cooled by a transcritical system built by TEKO

Most notably we have found that CO2 refrigeration technology is no longer only used in commercial refrigeration installations. More and more we are seeing success stories in small convenience stores and even larger industrial installations. Ice rink applications in particular are also becoming ever-more popular globally – especially in Canada where they comprise 30% of all transcritical CO2 installations.
In Europe, there are an estimated 29,000 transcritical CO2 installations in total today (a number that increases constantly and will be even greater by now). On average, around 90% of all installations are in supermarkets. 5% are in convenience stores and 5% at industrial sites.

In Japan, the use of transcritical CO2 in small stores has traditionally been the most popular (compared to larger installations). However, in the past three years, there has been a noticeable shift towards using this solution in larger installations as well. This is predominantly thanks to eased government restrictions on the use of CO2 in larger systems.

Future trends
At the same time as the data collection process, sheccoBase also conducted a global survey among 250 industry experts on the current use and future opportunities of transcritical CO2. More than half the survey respondents were from outside of Europe, representing the global HVAC&R sector.

The survey included input from a variety of stakeholders – both from industry and academia, including system and component manufacturers, refrigeration contractors, consultants, engineers, end users; and players from the education and training sector.
As a whole, respondents evaluated transcritical CO2 as a suitable alternative to HFCs and HFOs. It was also found that all-in-one integrated systems are popular with all participants and that equipment such as parallel compression and adiabatic cooling are considered essential for improving energy efficiencies. 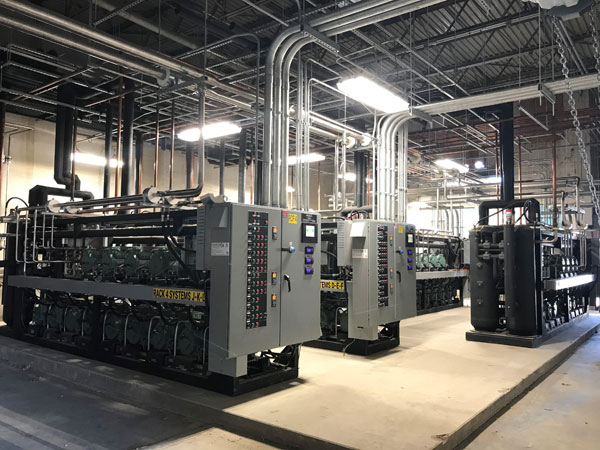 A 4MW industrial transcritical installation at Yosemite Foods in the US, by Sphere Solutions

When it comes to the adoption of transcritical CO2 refrigeration systems around the world, there are various drivers and barriers that influence this choice. Drivers will have a positive impact on the uptake of the technology, while barriers might hinder the progress of it.

Some of the key drivers and barriers were highlighted in the industry survey. Training was mentioned as a challenge regularly throughout the survey – often considered a key barrier. Other barriers highlighted included the higher first costs of transcritical CO2  refrigeration systems and the challenges associated with working with high pressures.

The survey respondents also shared an overwhelmingly positive response in terms of drivers, the biggest of which being CO2’s environmentally friendly properties, the limited regulatory constraints, and the increased energy efficiency. These make CO2 the preferred choice for end users wanting to future proof their installations and be sustainable.

To assess the drivers and barriers properly, it is important look at how transcritical CO2 systems compare to other available options – such as traditional HFC systems, as well as HFO systems that are now gaining in popularity, and even natural refrigerants, such as ammonia (R717) and propane (R290).

The drivers and barriers will change depending on the region as some countries are more advanced in their CO2 journey compared to others. In some regions, training is plentiful, for example, while other regions might still struggle with component availability. However, as regulatory pressure fast-tracks the move away from harmful synthetic refrigerants, many factors that were previously considered barriers are being addressed to increase the uptake of sustainable refrigeration solutions such as transcritical CO2.

With the help of extensive research, the ‘World Guide to Transcritical CO2 Refrigeration’ has highlighted the great potential of CO2 for the use in refrigeration installations of any size. Although it may not always be the most suitable solution for a particular installation in a particular geographical region, it is certainly worth considering as it often brings great environmental and efficiency gains.

With increasing regulatory pressures to phase down harmful refrigerants and even the low-GWP synthetic refrigerants starting to show warning signs, the future is clearly natural.