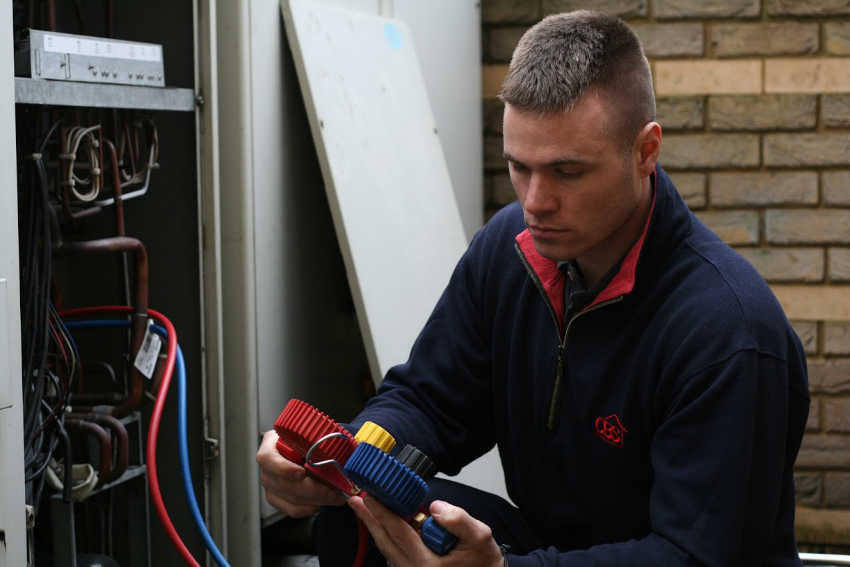 Spectroline, one of the world leaders in leak detection, has just launched Cool Seal, an entirely new method for repairing problematic refrigerant leaks that also promises to safeguard systems against future leaks.

Refrigerant leaks are a time-consuming and costly business for both experienced AC&R maintenance contractors and the businesses running the air conditioning system.

For service engineers, leaks can take a long time to find – let alone repair – particularly if the puncture site is very small or hidden from view of the engineer on site.

For the company operating the system, leaking refrigerant costs money, damages the environment, increases its carbon footprint, and greatly reduces a system’s efficiency, reliability *and* lifespan.

With reduced pressure and refrigerant levels, the air conditioning system has to work harder and use much more energy to maintain the same output.

While some leaks are relatively easy to spot and seal, most AC&R service engineers recognise that there are a range of leaks that are much more problematic than others. These leaks are harder to detect, harder to find and harder to fix.

In some cases, service engineers will be aware that a real leak definitely exists in the system from reduced pressure levels over time, but small leaks like this that discharge minute levels of refrigerant can be near impossible to locate.

There are few things quite as frustrating as spending an hour with an electronic detector combing an a/c system for a leak you never find.

So what are the most problematic leaks, and what is the best way to deal with them effectively and quickly?

We asked a group of AC&R service engineers to come up with a list of the most hated, most annoying, and the most difficult to find and fix refrigerant leaks in the book. See if you agree; here’s their top four:
​It is usually the smallest, most hidden or concealed leaks that take engineers the most amount of time to repair, but typically, just finding these leaks in the first place can be the most time-consuming job of all.

Larger leaks are clearly much more obvious and easier to locate and repair because more tell-tale refrigerant is escaping for detectors to find. It is the small, hidden or intermittent leaks that have been the greatest problem for service engineers for many years.
Content continues after advertisements 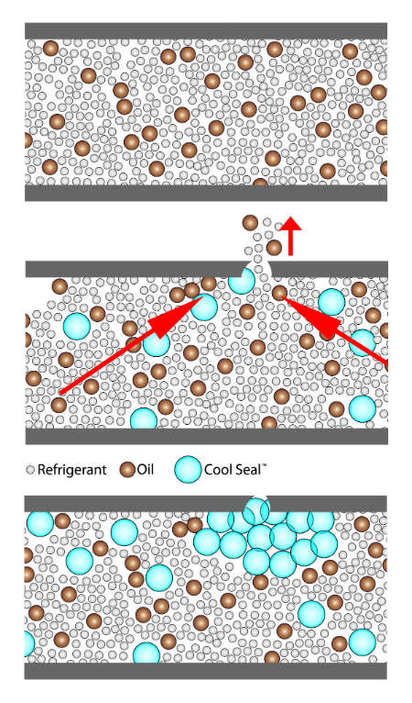 Now, however, Spectroline has formulated an entirely new type of leak sealant called Cool Seal, one its makers say is designed to fix all four of the examples our engineers gave us above with one application.

Not only that, Spectroline and Advanced Engineering also recommend it as a preventative maintenance measure because it is formulated to continually safeguard the system against future leaks.

Distributed exclusively in the UK by Advanced Engineering, Cool Seal is Spectroline’s brand new leak detection method. Composed of aliphatic hydrocarbon compounds, it is safe, non-reactive, easy to use and non-polymer which means it doesn’t harden when inside the system.

The AC&R service engineer injects the Cool Seal liquid formula into the low pressure service point using a supplied EZ-Ject Kit, allowing it to circulate harmlessly throughout the system.

That’s it. When a break or leak does occur, internal pressure within the system causes refrigerant and oil molecules to rush to the leak site to be expelled.

Now here’s the science bit: Cool Seal molecules also rush to the same leak site, but because its single, double and triple aliphatic compounds are much larger and longer than the surrounding molecules, they accumulate and group together at the leak in a process known as “flocculation”.
​
This flocculation or build-up of larger, more complex molecules directly over the leak site physically blocks and seals the leak, preventing the much smaller refrigerant or oil molecules from escaping.

Most importantly of all, unlike polymer-based leak sealants – which react with moisture or oxygen at the leak site to form a hard patch – Cool Seal is an entirely polymer-free and oil soluble formula, so there is no hardening whatsoever and no troublesome clogs because no such chemical reaction takes place.