It has been quite a journey for WAVE Refrigeration since it was founded in 2015, with a series of blue-chip clients on board and the move to an employee ownership model.

Working for ALDI, ASDA, Bidfood, The Co-op and Sainsbury’s, it’s fair to say that refrigeration consultant WAVE has had a busy first six years.

WAVE provides a wide range of innovative technical and project management services that support the move away from HFC refrigerants. In the past year, it has supported its clients in the implementation and ongoing roll-out of doors to chilled display cases and has also played a significant role in bringing HFO technology to market (see case studies below).

As a data driven organisation, WAVE also has an eye on the digital age and has developed a suite of applications that assess non-HFC technology on CAPEX, OPEX, emissions and total cost of ownership. WAVE’s work aims to help guide its customers to make the best investment and sustainability decisions for their respective businesses. 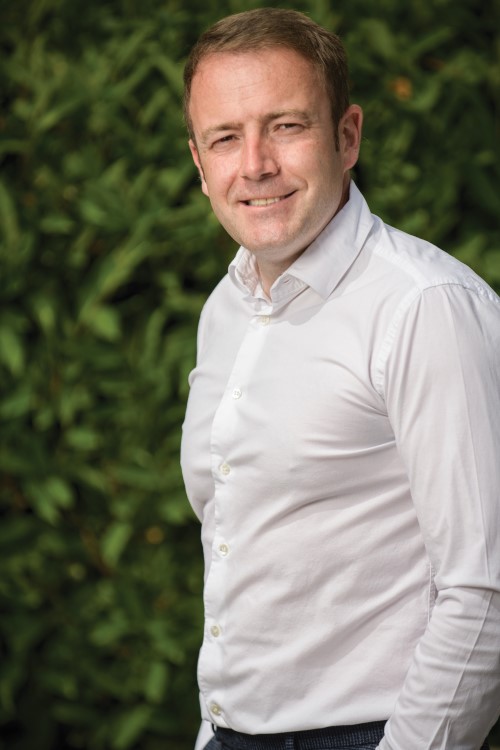 James Bailey: “I established WAVE in 2015. During the first 18 months of trading I worked long hours as the need for WAVE’s services grew. Through a blend of hard work, determination and good fortune, WAVE was appointed as ASDA’s refrigeration consultant in late 2016 – an appointment which proved a catalyst for our growth. In June 2017, I was joined by Mark, following the securing of a refrigeration professional services contract with ALDI.’’ 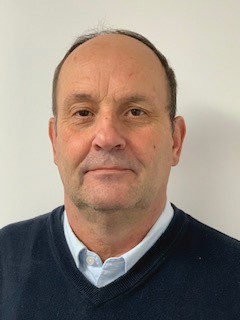 Mark Williams: “As the business continued to grow and we gained further customers, we were joined by colleagues who brought with them significant industry experience and importantly who shared in the mission and vision of WAVE. We set out to create a culture of excellence. Our focus has never been on a defined growth strategy; it has always been the creation of the very best people centric culture - this is our strategy. So long as you understand the industry that you operate, have a clear mission, and vision, and have products or services that customers need, allow your culture to do the rest and empower your employees and most importantly trust them.” 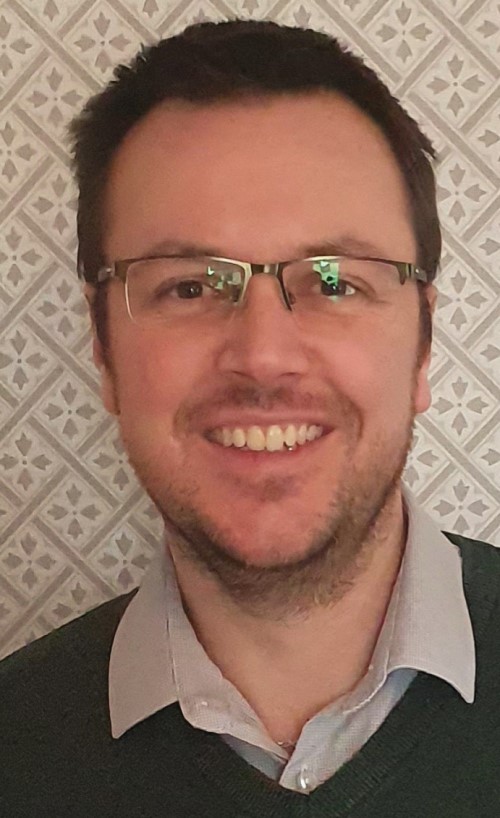 Alan Saban: “As WAVE grew, James and Mark realised that it was going to be necessary to recruit and develop aspiring engineering professionals to help combat an ageing industry. In response WAVE has committed to the annual recruitment of a trainee to the business – this is something that WAVE is respected for and helped support my decision to join the management team in January. The decision to do so has reaped immeasurable benefits. WAVE has provided our young people with a career and a mindset to innovate and ensure customer satisfaction. Alongside client exposure and learning on the job from day 1, our current and former trainees have gained a blend of the following qualifications and experiences:

We are committed to providing our younger and more experienced colleagues full support in having the ability to execute their roles with distinction.” 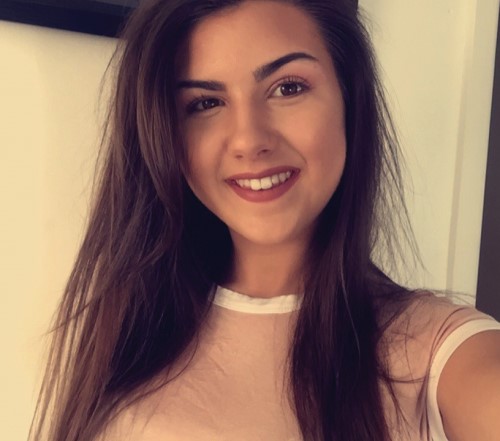 Ellie Clare: “As a business we are also passionate about marketing and PR. In joining WAVE as a trainee and totally buying into the culture and ethos here – our PR has helped us win local and national awards for our work and our publicity has also helped to attract blue-chip clients; enhanced our culture; and most importantly kept our team in well-paid and enjoyable jobs with a company which cares about our people, customers, and the environment in equal measure.

"A substantial amount of our PR is connected to our Corporate & Social Responsibility. This takes the form of a continuous programme of ethical, societal and environmental endeavours that are linked to the Sustainable Development Goals. Launched in 2019, we have achieved so much; from sponsoring the Keighley Cougars RLFC NHS playing shirt, where profits were donated to the NHS, to funding the construction of a water well for a family in India who previously had no access to fresh water, to participating in beach clean-ups, refurbishing a shelter in the park close to our office, and arranging for Alastair Campbell to visit Keighley and talk to the team at WAVE and other local businesses to understand how to manage and overcome mental health concerns, we are fiercely proud of our CSR achievements!”

MW: “In December 2019, WAVE became accredited as Investors in People (IIP). We achieved a benchmark score of 834 out of 900, which saw us ranked an impressive seventh out of 140 IIP-accredited construction sector businesses. Accreditation provided James and Joanne Bailey, as the company shareholders, with the catalyst for the future of what WAVE should be – a company that shares its success with its people.’’

JB: “Three months from our initial IIP accreditation, I began to explore a transition for WAVE in the form of our ‘20/20 vision’. I delivered our 20/20 vision and successfully led WAVE in forming an Employee Ownership Trust (EOT). Our EOT has enhanced motivation, morale and the high-quality customer-focused services that WAVE provides. Since becoming employee-owned, we have been involved in a range of interesting projects – where all of our team have gone above and beyond.

"Examples include playing our part in assisting ASDA and their stakeholders deliver the UK’s first store in Bootle that operates fully on DX HFO solutions  – reducing both energy and carbon emissions. This is something we are particularly proud of as we have also helped create a design standard for A2L refrigerants that will soon be shared with the wider industry.

"Of equal merit, we have supported carbon emission reductions further through the work we do for ALDI as they became the first retailer to commit to doors on chilled earlier this year. Both of these examples showcase different approaches to reducing carbon emissions – we are delighted to have a team that has such broad experience in new and emerging technologies.”

AS: “As part of the transition into becoming at EOT, I joined the company to strengthen our position from an engineering and commercial perspective. Alongside a number of internal promotions, the business has continued to grow and thrive, and has ultimately allowed James to define an exit strategy. James leaves WAVE in December, and his lasting legacy has been defined by creating and growing WAVE from ground up into one of the very best companies to work for; both in terms of what we do and our culture, with the latter demonstrated by our 2020 annual IIP assessment.”

MW: “Following the transition to employee ownership, we received our annual IIP assessment where we currently rank at Number 1 out of 155 accredited businesses operating in the construction sector. Alan, James and I could not be any prouder of our incredible team.”

Adopting doors on chilled display cases is a relatively simple innovation, but it presents two significant energy reduction benefits. Firstly, they reduce the refrigeration system energy consumption and secondly, reduce a store’s heating demand due to the reduction in cold aisle air spillage. 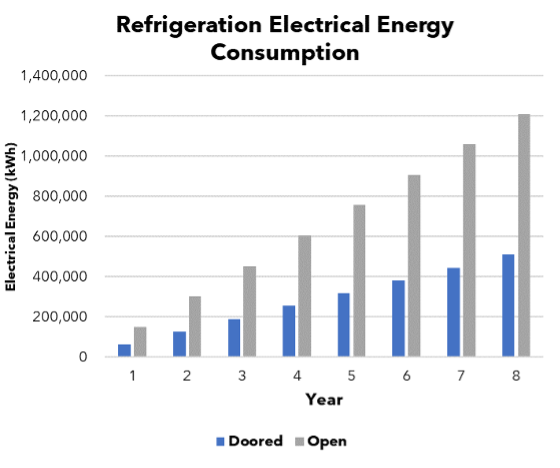 Owing to the reduction in cold aisle spillage, the positive impact on a reduction in heating demand can be quantified. The graph below assesses the resulting difference in refrigeration and heating energy consumption associated with the display cases; it has a profound effect on the total energy consumption. 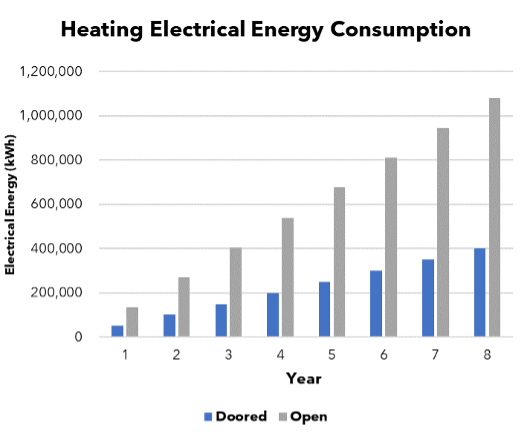 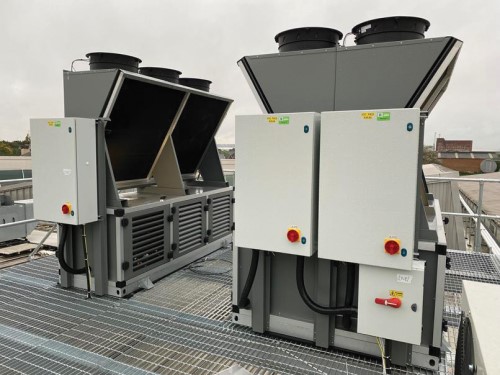 ASDA commenced an initial trial of HFO refrigerants in 2017. R454A was selected due to its similar capacity and P-to-T properties to HFC dominated synthetic refrigerants such as R407F and R448A. Along with possessing a GWP of 238, improved system performance has been achieved along with an energy saving of 4% through the high isentropic efficiency of R454A. Alongside providing technical support in safely implementing HFO technology, WAVE also supported ASDA in determining the energy and wider environmental benefits of HFO refrigerants. 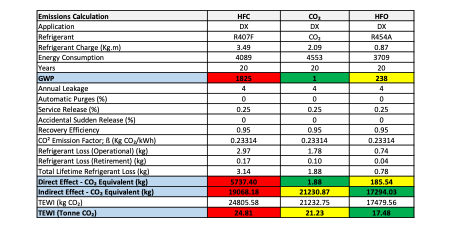 ASDA is an advocate of all new technologies and selects its requirements based on a matrix of environmental, performance and safety based measures. Alongside stakeholders, it is currently replacing the CO₂ refrigeration systems with direct expansion HFO (R454A) systems at its store in Bootle. It is believed that Bootle will be the world’s first supermarket that will operate fully on HFO refrigeration technology.