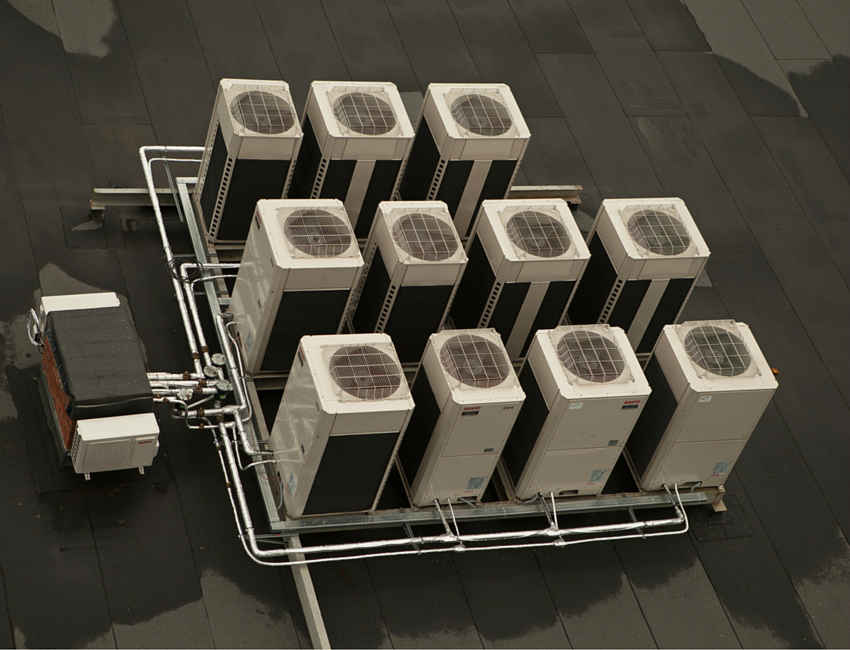 European commitments to reduce energy usage by 2020 have set demanding limits through the ERP directives for energy consumption and noise. If an air movement system is perceived as being noisy it will be inefficient.

​Whilst the amount of primary energy converted to noise in an air movement system is very small, the cause of the noise will have the greatest impact on the energy consumed. Combining high efficiency drive motors with aerodynamically efficient design requires intelligent thinking coupled with numerical modelling techniques. ebm-papst has used these tools to analyse the performance of their product range and has developed a number of innovations that optimise the passage of air through the fan.
When air is on the move it does not react well to sharp changes in direction, high velocities caused by restrictions or turbulent eddy currents. In air handling systems laminar flow is a goal that is achieved by minimising the air velocity in the system, using rigid ductwork, swept or curved bends / splitters and guide vanes where possible.

Areas where turbulence occurs can reduce the effective area of a duct resulting in increased air velocities. Turbulence consumes energy in its creation and the increased velocity at these points requires greater dynamic pressure causing a greater load on the fan.
​
These principals can equally be applied to the fan as the air passes into and through the impeller.

In developing this backward curved fan, flow analysis identified four areas of turbulent flow through the existing impeller design. At the interface between the rotor hub and impeller back plate and the exhaust of the fan, there was a circulation of low pressure air.

​Increasing the working area of the impeller blade resulted in an increase in performance and efficiency and facilitated a reduction in noise levels. This impeller range is designed for low to medium pressure applications in sizes from 133 to 630mm diameter.

For medium to high pressure ranges, this backward curved fan range already benefits from rotating diffuser technology, allowing air passing through the impeller to equalise in pressure as it reaches the exhaust.

Coupled with an optimally selected EC motor and matched variable speed electronics, the system delivers real world efficiency improvements that are realised in practice and lead to low power consumption.

A further improvement in efficiency has been achieved by the addition of an aerofoil blade design which provides a highly stable, low loss performance with a wider peak efficiency operating range. The inclined trailing edge of the blade reduces exhaust flow turbulence as well as reducing the tonal effect of the blade passing frequency.

​This development has also allowed the motor to be positioned optimally to maximise the working area of the impeller. The total improvement in efficiency is in the region of five to eight per cent with a reduction in noise level of over 3dB at the same operating point. 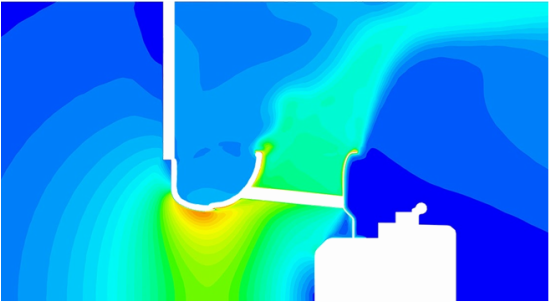 ​Aerofoil blade designs are available in sizes from 250mm to 560mm diameter.

Addition of a Diffuser

The addition of a diffuser to the hybrid design axial impeller ranges recovers static pressure from the exhaust side of the impeller blade. The diffuser reduces the exit velocity whilst straightening the exhaust flow, thus improving the static efficiency and performance of the fan.

​The subsequent reduction in turbulence losses also reduces noise and provides a quieter, more efficient fan system. This improved performance can provide extra airflow capacity in times of extreme demand. Alternatively, the extra performance can be used to reduce the speed of the fan to match the operating point, saving on energy and reducing the overall noise level of the equipment.

​Available for 710, 800 and 910mm diameter hybrid design axial fans, the diffuser can reduce power consumption by up to 22%; reduce noise level by over 7dB or increase the performance capability of the fan by up to 12 per cent.

It is not always possible to manufacture air moving equipment according to design ideals due to space constraints or cost. In some cases this can result in undesirable turbulence induced noise and amplify the tonal noise content of the fan.

​After modelling a number of applications where space was at a premium it was found that there were stable vortices forming at the inlet of the fan. As one of the impeller blades passed through one of these vortices an acoustic pressure pulse was observed. The speed of operation (rotational frequency) and the number of fan blades combine with these vortices to create a distinctive tone at the blade passing frequency. 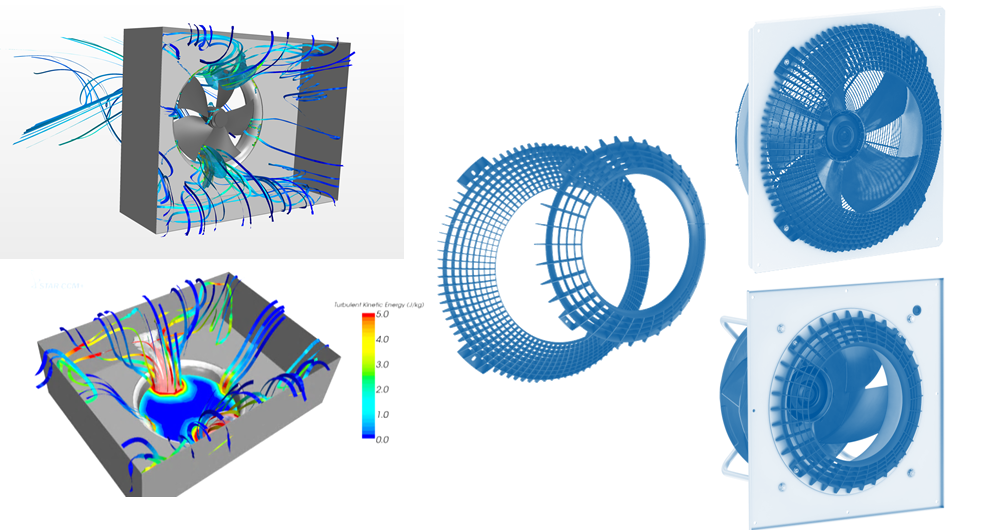 The air straightener breaks up the formation of these vortices, significantly reducing the blade passing frequency tone by up to 12dB. The straightening effect also reduces the overall broadband noise level by up to 3dB. Fitted on the inlet of the fan, it can be a quick and simple noise control method at source and is an alternative to other absorptive or resonant attenuation measures.

In summary, whether it is by aerodynamic design of impeller geometry or by studying and mitigating system effects using product enhancements, the effects of turbulence, high velocity airflows and excessive noise can be overcome by innovative design.