Out and About with Samsung 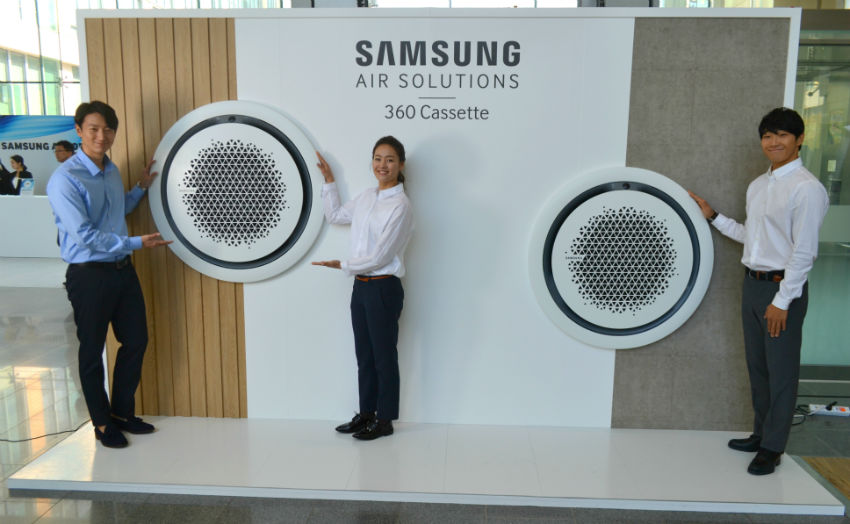 Will Hawkins flew out to Seoul, South Korea, to visit Samsung at the launch of its new air conditioning products.

Samsung had a big week, recently. The South Korean company kicked off its global campaign to introduce four new air conditioning solutions for the domestic and light commercial markets. They flew out the international ACR press and several hundred partners and customers to learn about products which Samsung hopes will help them reach further into new and existing markets.

Samsung arranged a slick round of 5-minute presentations on each product and a launch on stage reminiscent of another, USA-based technology company's product launches. It was delivered with a punch and focused on performance and style from the new products.

When the manufacturers have products made in a similar ways using similar components, what can Samsung do to make their solutions stand out? 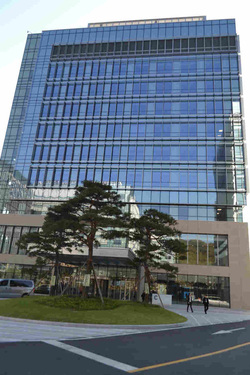 One of six buildings on Samsung's research Campus, Seoul.
Showing how efficient your air conditioning system is compared to your competitors is one way to differentiate. It is a powerful tool, and one area where you have to keep investing in research and development to make sure you are ahead of your competitors. Samsung has invested big money into its new air conditioning systems.

To illustrate the investment, Samsung took us to their research lab and centres. The former is the biggest I have seen from any manufacturer to date. It's massive. In one area, we went from a solar radiation zone which was +35 degrees C to a simulated outdoor environment of -22 degrees C. They switched off the lights in one test chamber and turned on lasers which showed the distribution of the air in the room. There are sounds labs too which have visual sound sensors so you can see where they noise is coming from in a room. The detail Samsung goes into is staggering.

More impressive, however, was Samsung's research centre in another part of the city. The company recently built six office blocks and installed different heating, ventilation and air conditioning (HVAC) systems into each of them. The HVAC systems cost $15 million and they are connected to a control centre where a team is monitoring them. The control room looks more like NASA than any HVAC control centre I've seen before.

In the main building, they are comparing its 'hybrid' HVAC system with a set-up in another building. The building we visited uses its latest VRF system with a ground source heat pump system, both feeding a water circuit into which heat energy is added or extracted. The main load for the building is cooling. Excess heat is stored in the ground or, in winter, used to melt snow on the car parks. 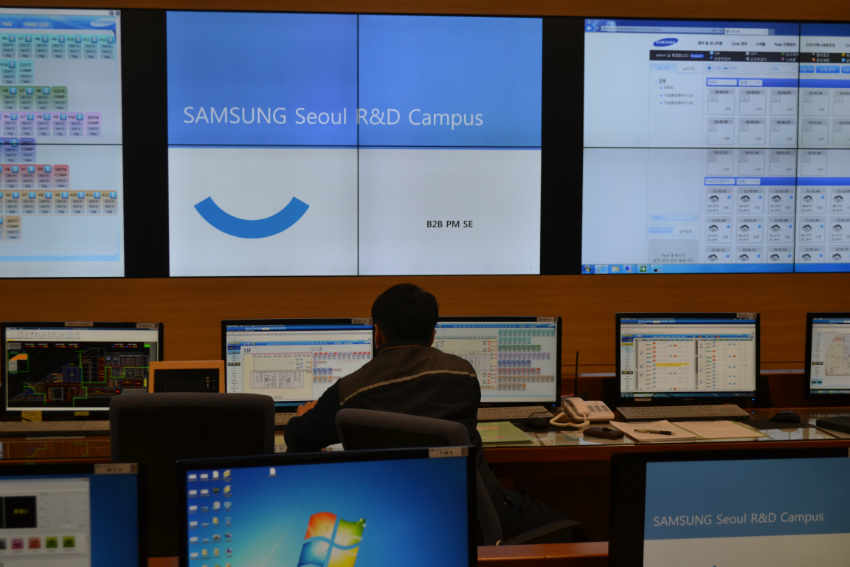 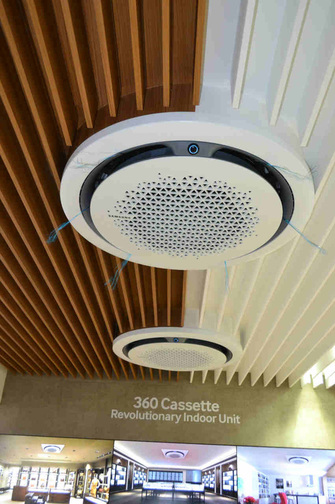 Samsung 360 Cassette
​Given that many office workers sit near an indoor air conditioning unit set into the ceiling, the 360 overcomes one particular problem with four-way cassettes, namely draughts. Often, sitting near a four-way indoor unit, you can find yourself blasted with a cold or warm air in your face. That quickly becomes uncomfortable with either over-heating or over-cooling.

No such problems with the 360 Cassette. It has no louvres and, instead, sends out the air in a circular fashion. That not only prevents an 'over-concentration' of air in one direction, but also makes sure the room is evenly heated or cooled more quickly.

If you prefer to send the air vertically down, the unit allows you to do that. Or, you can send the air into specific zones in a room.

An aspect of Samsung's new products, especially the 360, was design. Its round shape means that it is going to appeal to architects who want a more sympathetic indoor air conditioning unit for their designs. The 360 Cassette fits in nicely. Moreover, Samsung says you can have it any colour your want so it blends into the room.

The 360 cassette is a 'premium product' therefore it is likely to be more costly than a four-way indoor unit. Samsung have not confirmed the price yet. However, they are confident that its better performance will make this a strong choice because of its looks and its lower cost of ownership over its lifetime.

​Samsung's next product is less about the design (it looks much like any other outdoor VRF unit) and more about performance.

Samsung's new DVM S 30HP has some new features which increase its heating capacity by 29% percent. These include Samsung's new 'Super Inverter Scroll Compressor' which has a 'flash injection system'. These features make it much more efficient than its competitors' alternatives.

Space-saving is a primary benefit of Samsung's DVM S Eco 14HP side discharge VRF unit. It's designed for flats and office buildings where end users need to make use of the space on their roofs for other services (e.g. gardens or sports areas), or if they don't have the room for larger, traditional VRF outdoor units.
EU F-Gas regulations have pushed Samsung to develop its new DVM Chiller. The company realised that to enter the chiller market it needed to focus on the small to medium-sized chiller market. Its new chiller combines is a combined air-cooled and VRF systems in one.

​The product which stood out of the new line-up is Samsung's 360 Cassette. Given that most air conditioning cassettes are square, the name of Samsung's product is a give-away on its shape. The circular cassette is not only a refreshing shape, it's a capabilities are different too.

Instead of pumping cooled or heated air out in four directions that you expect from four-way cassettes, the 360 sends the air out in a more even circle from the unit. That means the conditioning air is more evenly spread which makes it more comfortable.

​When quizzed about their position on low-GWP refrigerants (e.g R32), Samsung is sticking with R410a for the time being. The alternative refrigerants have merits but Samsung has not done enough research and development yet to warrant using refrigerants like R32 or R290 (Propane).

Why is Samsung not more dominant in the UK? 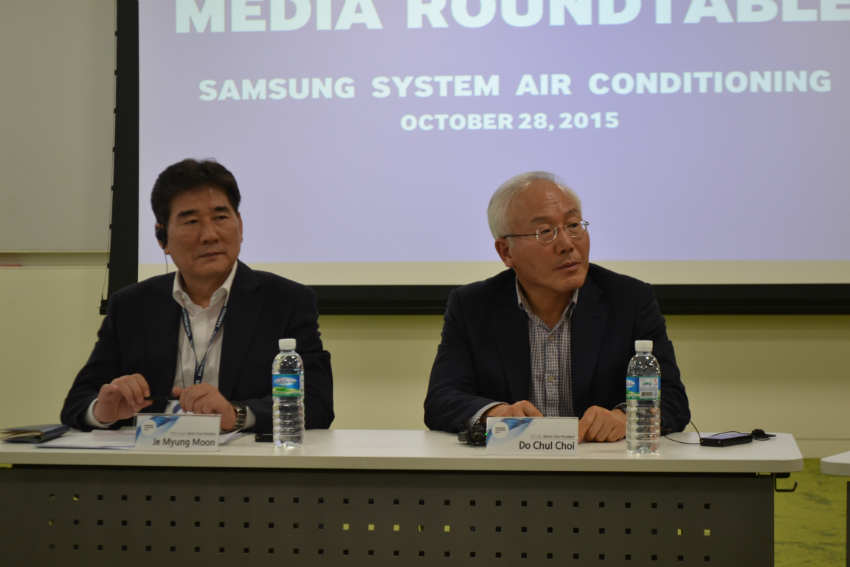 Samsung's executive explain how they plan to expand
​The company has an impressive range of products, immense research and development capabilities, and scalable production capabilities. Why is it not one of the top HVAC manufacturers in the UK? I asked Samsung's Charles H. Park, Samsung's vice president of their Home Appliance Division this question.

Mr Park stated that the company had not been ready to make its big push into the UK (or countries other than South Korea). Samsung had not neither the right products nor infrastructure in place to make their entry successful. The business now has stock of most of its new products in place (or on the way) to be able to fulfil orders from its distributors and partners.

He continued saying that they recognise Samsung has a big potential to grow outside of South Korea. They know they are behind but they have now addressed this by investing in the people, products and processes they need to be successful. Samsung has been patiently designing, testing and developing its products to meet the new market conditions before setting off on an expansion program.

Most contractors tend to focus on the capital cost of HVAC products. This probably happens because it is hard for manufacturers to differentiate their products from their competitors'. Therefore, contractors have little option to choose between products other than price.

Samsung is focusing on differentiating its products not only performance and efficiency, but also on using as little space as possible, which could be used better for generating revenue. Design and looks are an important factor in Samsung's differentiation. Samsung had a professor of architecture (Chan Joong Kim) and an architect (Russell Brown) presenting their views on the importance of the look and feel of their new 360 cassette. Their focus was on making their buildings 'human-centric'.

Samsung is, without doubt. serious about expanding its business. The massive investments show it. Its new product range is impressive. However, do they have enough 'boots on the ground' in the UK to compete. Let's hope so.