EnergiVault uses high efficiency BITZER open-drive ammonia compressors in the battery charger refrigeration system. It can also use other low-GWP refrigerants to suit the application

The patented EnergiVault, being developed by O-Hx, is designed to support decarbonisation of industrial processes, and commercial and residential buildings using stored 'coolth' as a source of energy.

EnergiVault was recently awarded government funding in the form of a Business Accelerator grant to commercialise the technology.

Cooling energy generated by the BITZER-powered refrigeration system is stored in a thermal battery containing a reservoir of phase-change material (PCM). The battery is 'charged' by the refrigeration system using off-peak electricity, and then drawn-down during high-tariff periods, significantly cutting end users' power bills.

Waste heat generated by the refrigeration system is captured by EnergiVault’s heat recovery system, and can be used for space heating or hot water for domestic use or industrial processes.

"Unlike lithium batteries, which can discharge only around 70% of their power, all the energy stored in an EnergiVault can be used without harming the device or its future storage capacity," says Bob Long, the inventor of EnergiVault.

"The charging process using ammonia refrigeration, for example, is highly efficient, due to the inherent efficiency of the refrigerant and BITZER screw compressors. Any conversion losses are comfortably exceeded by the savings achieved through using off-peak electricity."

EnergiVault’s refrigeration charging system is rated at 40-60kW. With a storage battery containing around 10 tonnes of PCM, a 1MW thermal store can be charged over 16 hours and discharged at a cooling rate of 1MW in an hour, or 500kW for two hours. EnergiVault can be used standalone or multiplexed to generate whatever power is required for an application.

One of the keys to the system is a custom-designed algorithm that manages how the unit is charged, maintained and drawn-down to maximise energy savings. It ensures that the lowest-cost power source is used at all times, while maintaining maximum battery power back-up.

Through a combination of demand shifting, heat recovery, reduction in part-load chiller cycling, and overall efficiency optimisation, EnergiVault is claimed to reduce energy costs by up to 62%, depending on the application.

Long added: "The only potential mechanical risk factor in the process is the battery charger – the refrigeration system. We chose BITZER compressors as they are supremely efficient and reliable. After four decades' experience with them in the industry, I am totally confident in the technology.

"BITZER UK has been very supportive of EnergiVault's development, and we are looking to use further BITZER components – line accessories, oil coolers, oil reservoirs – in the design." 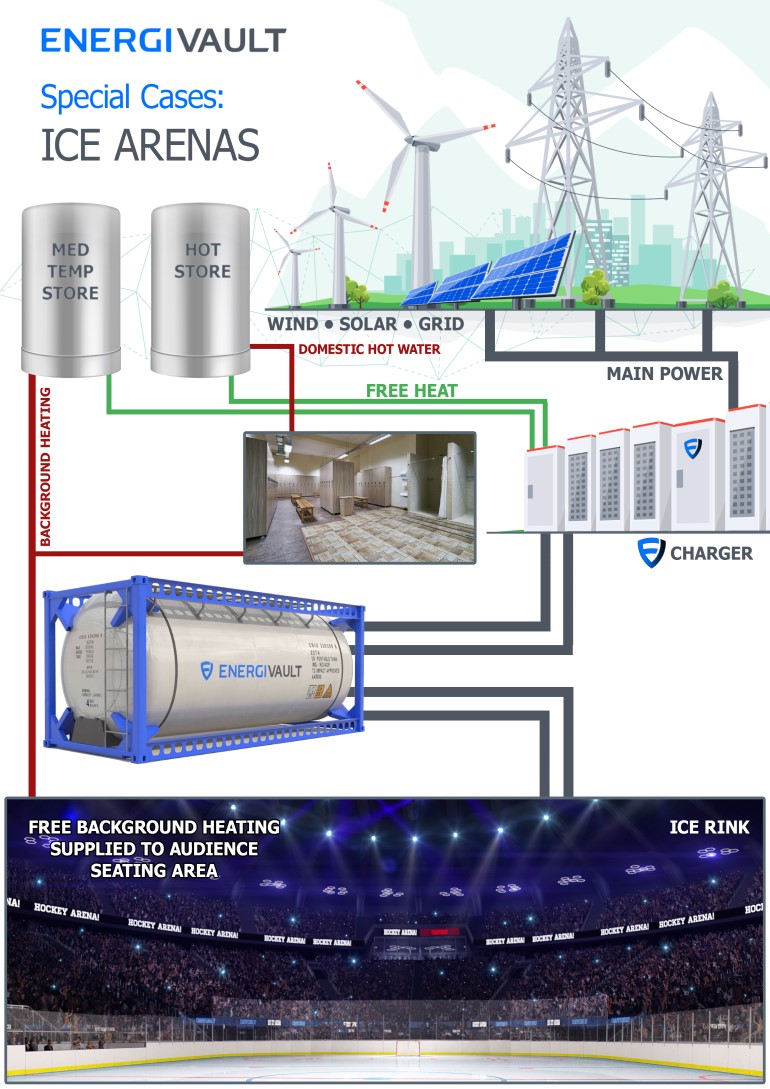 Example of an ice rink with EnergiVault

Kevin Glass, managing director of BITZER UK, said: "EnergiVault is an exciting development and demonstrates the potential of refrigeration-based power storage systems as transformational solutions. The push for net-zero carbon will require a complete rethinking of our energy infrastructure. With its thermodynamic and efficiency advantages, refrigeration offers the exciting prospect that our industry could be in the vanguard."

O-Hx was established in 2016 to develop and commercialise EnergiVault across the world. Partnering with environmental incubator 350 PPM, O-Hx is now launching a series of funding rounds to achieve substantial growth in the cooling energy storage hybrid sector.