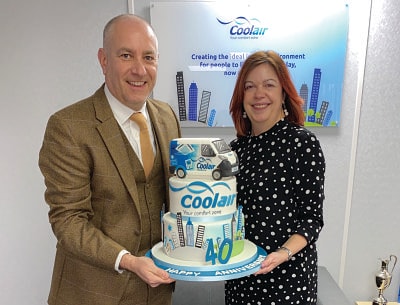 For a company celebrating its 40th anniversary, Coolair Equipment shows no sign of resting on its laurels and says this is the year in which it plans to cement its position as the country’s leading air conditioning installer and aftercare specialist.

As well as recently revealing a re-brand of the entire vehicle fleet, Coolair Equipment will embark on a series of high-profile events in 2020, including parachute jumps and tropical bike treks to celebrate the landmark.

But the company says it is the culture of nurturing talent, embracing technology and empowering employees which has seen it through to its fifth decade.

Originally established in a terrace house in east Manchester, the nationwide firm now operates out of three offices: its southern base in Maidstone, Kent; a Midlands office in Cannock and Coolair House, its headquarters in Dukinfield, Manchester.

Managing Director John Otterson, who joined the company in 1984, is the longest-serving current member of staff. He said: “The air conditioning industry today, compared to the one Coolair entered back in 1980, is unrecognisable.

“Back then it was big, chunky chillers. However, our business model means we can adapt, change and grow with the industry. We were the first company to install a VRV system in the UK and now our focus is on installing increasingly sustainable air conditioning units.”

To say Coolair’s client base is diverse would be an understatement. The company has worked on projects for football stadiums, including Old Trafford and Wembley, as well as corporate projects, such as HSBC’s 210,000 sq ft HQ in Birmingham. But more than 65% of its jobs are for small and medium-sized businesses, with contracts worth less than £10,000.

For Otterson, it is this flexibility that has secured the business’ long-term future. He said: “We don’t like to put all our eggs into one basket. We like to take on lots of smaller jobs, there is no long-term financial risk and this allows us to take on bigger projects.”

Also key to Coolair’s success is its culture, known in-house as ‘Cosy Coolair’.

The firm actively recruits young, ambitious college leavers with plenty of potential, and invests in on-the-job training, pairing them with a more experienced member of the team who guides them through every aspect of their job. It’s a process that can take years but is pays dividends, quite literally.

Regional Director Neil Gibbard said: “Coolair’s culture is all about bringing staff through from a young age and growing them all the way through to potential shareholders and directors.

“As directors exit the business, their shares are bought back by the company and re-allocated at nil cost to successful members of team across our three offices. This allows us to retain expertise in-house and have continuity of the Coolair ethos.”

In addition to long-term career growth, the firm offers all staff flexible working, help when facing illness and excellent maternity and paternity packages.

Coolair is also leading the way when it comes to recruiting more women into the HVAC sector. Visit any of the company’s three offices and you will find an army of women in a wide range of roles, including Samantha Reynolds who is a Contracts Engineer in the Midlands office, Karen Swallow who keeps the Aftersales team running and Kerry Welsh who co-ordinates all the contracts at the firm’s Manchester HQ.

Helen Sharratt, Finance Director, said: “We know that the RACHP industry has long been considered a male industry. But over the years, we have gone out of our way to shatter this stereotype and not just recruit – but keep – talented women in the business.

“The technical know-how these women have is essential to the running of our firm. They are often unseen, working to support the engineers on the frontline, but they are the central nervous system of the business.

“Attracting talented women is a focus for us. It has helped us become the business we are today. The Coolair culture is geared around supporting our staff – male or female – so we have worked hard to ensure we offer generous packages, as well as flexibility to ensure a fair work life balance.”

February 13, 1980: Coolair Equipment Limited was registered at Companies House by Nick Parker. He was joined by Mike McCourts and Mandy Doherty and the trio started trading as Coolair from a corner shop on Debdale Lane in east Manchester. The first order – EQN1000 – was for ICI’s Blackley, Manchester, workshop.

1984: The sales team was given a boost when John Otterson joined the firm. He is still with Coolair today.

1985: Coolair placed its first order with Daikin and, because of the size, it was shipped direct from Japan.

2006: The Manchester team moved to Coolair House Mk II – their current home. Another significant event in 2006 was the retirement of Financial Director Phil Plant. His exit helped shape the Coolair culture which rewards loyal members of staff with directors’ roles. The same scheme has been used three times throughout Coolair’s history.

2012: Coolair’s founder and Managing Director Nick Parker retired, leaving the company in the hands of a new management team.

2014: Coolair celebrates a record turnover, which saw them top £28m for the first time. It was also the year Neil Gibbard organised the firm’s first charity bike ride across Vietnam and Cambodia, raising a whopping £90,000 for Challenge Cancer UK.

2020: Coolair Equipment turns 40! Staff celebrate with cakes at each office. A celebration is planned at the firm’s annual conference in the spring as well as another charity bike ride from Vietnam to Cambodia.

How much cooling does the world need?