Innovations in Heat Pumps and Cooling - The Integration Challenge

The event focused mainly on the opportunities, challenges and new solutions offered by district heating and cooling networks. It included technical presentations, an interactive facilitated group networking session and a tour of the Byker District Heating Site at Newcastle. 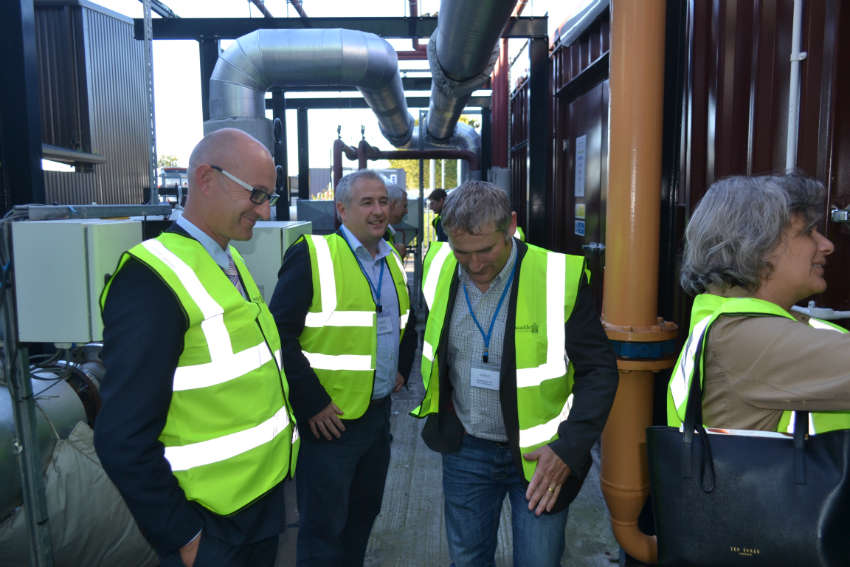 According to European heat pump association (EHPA) 75% of district heat in Europe comes from Combined Heat and Power (CHP) units. The remaining 25% is based on the production of heat from renewable energy resources. District heating networks are not very common in the UK.

​According to a summary of data collected by the Department of Energy and Climate Change (DECC) in 2013 there were 1,765 individual district heating networks in the UK. As shown in the figure below a district heating scheme comprises a network of insulated pipes used to deliver heat, in the form of hot water or steam, from the point of generation to an end user.

Figure 1 Basic principle of district heating
The presentations focused on the opportunities, significant challenges and new solutions for the refrigeration, air conditioning and heat pumps (RACHP) industry in the widespread application of district heating and cooling networks.

Energy Future and the role of CHP

Prof Swithenbank of Sheffield University presented on how district heating matters, his topic was extended beyond the issue of district heating alone to consideration of the broader subject of the energy future and the critical role therein of CHP.  The discussion thus included; energy sources, energy conversion, energy applications, and potential energy business opportunities.  Swithenbank summarised the idea behind this philosophy by using a phrase; “If you do not know where you are going, you may never get there!”

Swithenbank highlighted that various scenarios of the future world energy system have shown that fossil fuels will continue to be used for the foreseeable future, in parallel with a growing proportion of renewable energy.  However, in the short term there will be a growing fraction of fracking gas used for CHP, and a reducing fraction of coal used for power generation.  In the medium term, the viable route for low carbon power and products is carbon capture via oxy-fuel combustion with underground carbon dioxide storage (CCS).

Prof Swithenbank iterated that as the fuel source for power generation moves from coal to ‘fracted’ gas, the opportunity has arisen to use a network of smaller power stations with a more efficient thermodynamic cycle based on gas turbine technology, and the example presented is one known as the Allam cycle.

Nevertheless, as with all thermal power cycles, low grade heat is still available for district heating.  The Allam cycle is a recuperative gas turbine cycle, which uses the basic Carnot principle.  This is that the cycle expansion and compression stages should be as near isothermal as possible, and that their temperatures should be separated as far as possible.

The system is much simpler than the Combined Cycle Gas Turbine (CCGT) and its performance potential of achieving a target net efficiency of 59% including carbon capture is particularly noteworthy.  This high efficiency is achieved by compressing the LNG, oxygen and recycled carbon dioxide as liquids and reheating the gas flow before it passes through the combustor to the turbine.

​The work needed to compress a liquid is very small compared to the power needed for a compressor to compress the same flow of gas through the same pressure ratio.  Thus the power output and engine efficiency is increased dramatically.
Content continues after advertisements

Heat Network at University of Warwick 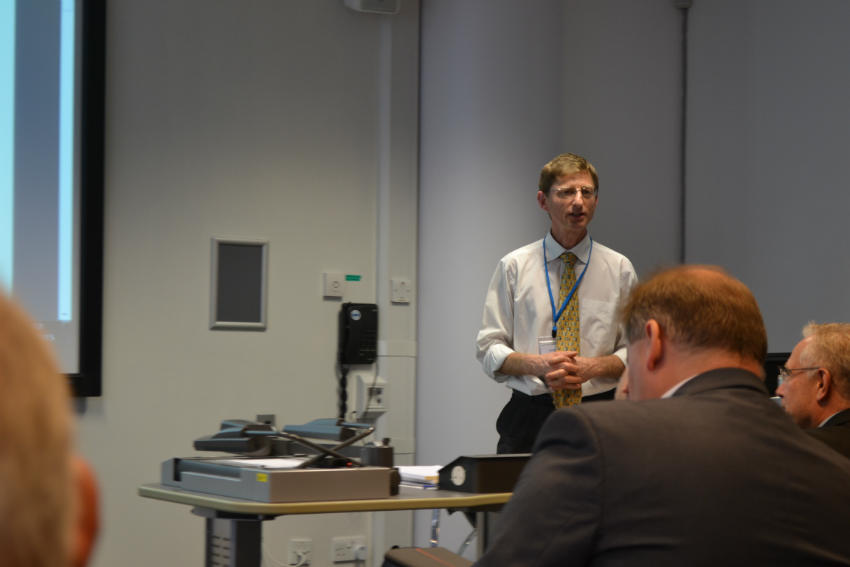 Controls are always viable:
When ORC and steam generation can be viable:
What could change the market:

The Future of Heating and Cooling 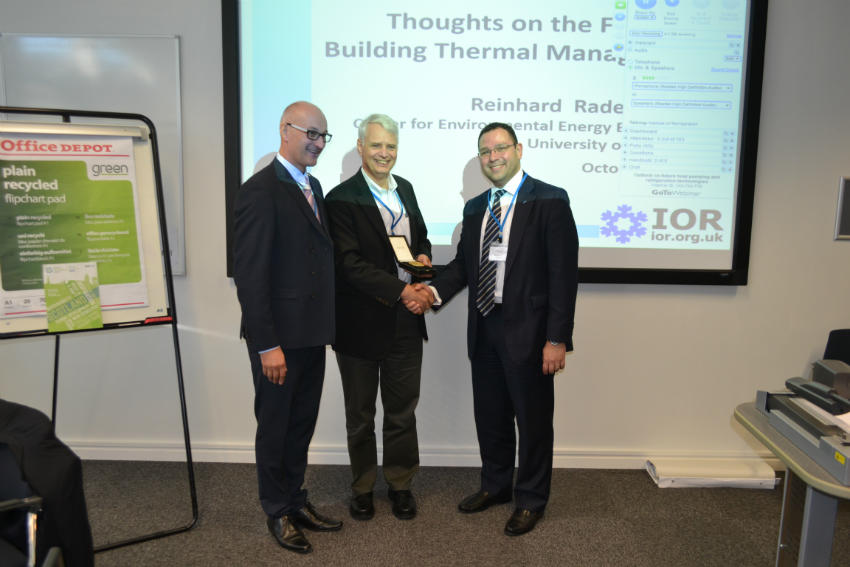 ​Carole Bond provided an interactive networking session. During the networking session participants were asked to reflect on the paradox that even though the UK Government says that district heating or heat networks are part of the future of heating in the UK, district heating in this country currently has one of the lowest market shares across Europe. Why is this? The presentations throughout the morning had demonstrated that the UK does have pockets of best practice, how might these be grown?

Participants were initially asked to discuss amongst themselves what had stood out for them in the morning’s presentations.  Some reflected on district energy power source and scale issues saying there was a need to ‘stop thinking how to burn things better; don’t burn at all (or as little as possible)’ and that ‘small is better.’ Other participants were struck by the poor ranking of district energy in the UK heating energy market and said they were ‘amazed at the laggard approach of the UK government.’

Participants were then invited to discuss in groups to consider why the UK was at the bottom of the European league when it came to the uptake of district energy and what, in their opinion did the ‘laggard’ UK need to do first? Group responses focused on three key areas:
In the final part of the networking session attendees were invited to put themselves into the shoes of organisations that were either district energy investors/buyers/planners who were considering investing or buying district energy systems or developers and suppliers of them.

These new groups were invited to spend some time thinking about the blockages and enablers to district energy that may exist in the system. Investors/buyers were asked to think about what key questions they might have and what issues they would be holding. Developer/suppliers were asked to think about how they might go about describing the benefits to potential buyers and how they might allay any of their fears or issues?

Once both groups had developed their thinking they were asked to share their question, issues and thoughts with each other and then, afterwards, reflect on what happened. Two key issues repeatedly came up for participants during this dialogue.

​The first, which was shared by many, was concerned with trust, both in terms of ‘mistrust of what’s being sold’ and ‘mistrust of what’s behind it – does it have substance?’ The second was linked to investment whether investment return horizons ‘most buyers/investors are tied to short- termism (i.e. requiring paybacks of 2 years or less)’, lack of investor confidence ‘if it’s not Government driven, businesses won’t invest in it’ or project feasibility ‘due diligence to address viability – no-one will invest in this.’

Tour of the Byker District Heating Site at Newcastle

The SIRACH event also included a tour around Byker district heating system. The District Heating system supplies heat and hot water to the properties on the Byker estate which were built in the 1970’s.

Currently nearly 2000 homes are connected to the system along with the local primary school, church, offices and community buildings. The main heat station includes three gas-fired boilers for higher load demand and a one megawatt biomass boiler to deal with the base load on the system which also attracts Renewable Heat Incentives (RHI). This biomass boiler works on wood chip.

An additional one megawatt gas fired Combined Heat and Power (CHP) plant is used during the day when demand is higher. This also has the benefits of exporting electricity to the national grid that would attract a Feed-In Tariff. The additional income from the RHI and Feed-In Tarrif amounts to £250k per annum which helps to reduce the operating cost of the system.
​
Due to the income from the incentives for the third year in a row it was reported that there has been no increases in the heating charges for the Byker Wall Estate residents. This is despite the fact that domestic gas prices have increased by around 30% in the same period of time.
If you want to experience SIRACH in person, our next SIRACH meeting is scheduled for the 20 January 2016, at Woking, GU21 5JY.

SIRACH will be exploring the topic of - Domestic and Commercial Heating and Cooling - next generation technologies.

The centre is designed to support the expansion of the air conditioning industry and further encourage the growth of the UK renewables market. The meeting will focus on the new and developing technologies that could potentially revolutionise the heating and cooling markets. The event will include technical presentations, a facilitated networking session and a tour of the facility.

For more information or to be included on the SIRACH mailing list please register at www.sirach.org.uk  or email [email protected]