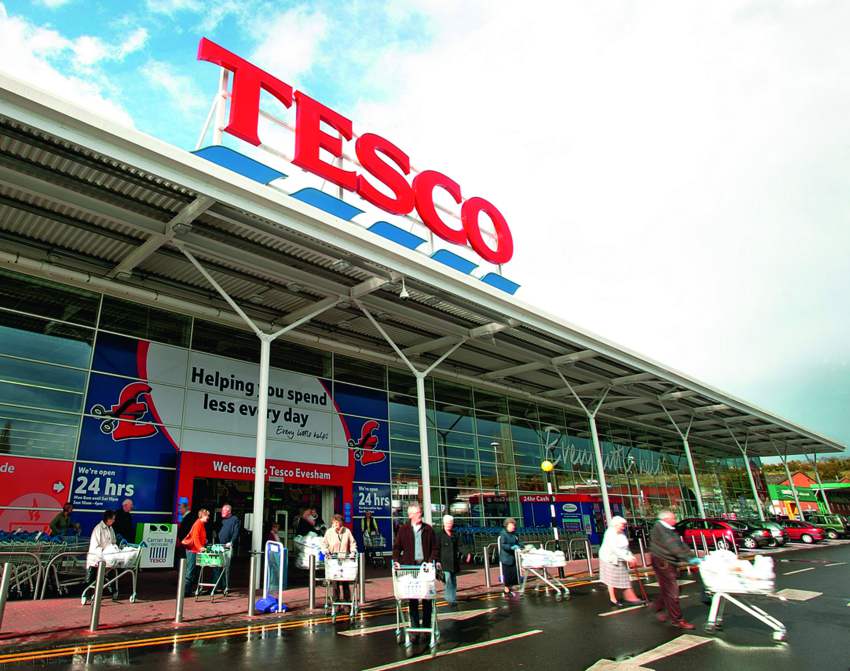 Change needed
It’s in the latter area that Honeywell has been helping Tesco to reduce its carbon footprint. By moving to Honeywell’s Solstice N40 in about 1,200 stores, the CO2-eq tonnage relating to service leaks can be reduced by 40 per cent.

One major cause of supermarket carbon emissions is their choice of refrigerant. R-404A has a very high global warming potential (GWP) of 3922, and accounted for 99 per cent of Tesco’s CO2-equivalent refrigeration carbon footprint from direct emissions. To meet their sustainability commitments, it was clear Tesco needed a change.

Under the new strategy, any new store that Tesco opens will use the lowest GWP refrigerants available. Equipment that will last beyond 2022 will be retrofitted with a lower GWP refrigerant, while equipment older than 10 years will be sustained until its replacement between 2016 and 2022.

To initiate the conversion, Tesco launched a review of its current refrigerant system to determine how changes could be made in the most cost-effective manner. The supermarket organised a seminar for the UK and world supply chain base, to set clear goals across the business and ensure cooperation during the conversion process. Tesco also created an extensive database of existing assets, making it possible to track the age of equipment.

Product quality
After assessing the alternative refrigerants on the market, Tesco chose to trial two refrigerants in UK stores: R-448A and R-449A. These field tests took place in four large format stores and four convenience stores, located in both the north and south of the UK to cover the varying ambient conditions.

The refrigerants were measured against product quality, system temperature performance, system energy consumption, and refrigerant leakage. R-448A, otherwise known as Honeywell’s Solstice N40, had considerable advantages as an alternative refrigerant. It has a GWP on 1,387 (1,273 according to the fifth revision), making it the lowest-GWP, non-flammable refrigerant commercially available today that can be used to retrofit existing systems as it acts as a near drop-in replacement for R-404A, rather than requiring substantial investment in a whole new refrigeration system.

Following the successful trials, Tesco selected the R-448A option as the cornerstone of their new global sustainability strategy to reduce refrigeration emissions.

The program began in January and by the end of March more than 50 stores had been successfully converted to R-448A. More than 200 stores have now been retrofitted.

The success of the conversion project required a close collaboration between Honeywell and its UK partners, to ensure there was no disruption to Tesco stores and services. A-Gas, a major distributor of Honeywell refrigerants for the UK, provides a reclaim and testing facility, while Climate Center provides national delivery and collection of new and reclaimed refrigerants. Carter Synergy and Space Engineering, meanwhile, provides the expertise for the actual conversions in each store.

Every store has different requirements that impact the time required for each R-448A retrofit. Store size, condition and type of equipment, and whether there is a need to repair or replace parts of the circuit, can all impact the time taken.

Reduced consumption
Throughout the process, Honeywell provided Tesco with technical support to minimize retrofit time and disruption to stores. The actual upgrade takes place overnight, so customers experience no disruption.

“R-448A allows us to not only improve our environmental commitment though a much lower GWP, but has also helped to substantially reduce our refrigeration energy consumption,” added Brian Frankland, Tesco. “The logistics involved in the recovery, reclaim and re-use of the existing R-404A has worked well.”

Tesco is just one of the many supermarkets that are turning to lower-GWP refrigerants to meet sustainability commitments. More than 2,000 supermarket installations were completed with R-448A by the end of 2016, and more and more supermarket companies are using R-448A in large-scale store conversions to help meet their energy efficiency goals.
​
It is in the interest of all large R&AC installations to accelerate the conversion to more environmentally preferable refrigerants such as R-448A. These refrigerants are available today and they avoid the inevitable legacy product scarcity that will come from F-gas phase down. Taking the initiative today means retailers of all sizes can decrease their carbon footprint, while simultaneously increasing energy efficiency and the bottom line. ​
Content continues after advertisements