The first award you won in January was for the AxiTop Diffuser. To use the judges’ words, they said ‘it is a clever product and it makes a marked difference’. They were impressed.

Essentially, a diffuser is not anything new. We are attempting to improve the efficiency of already efficient EC products, to take efficiency another notch up. Looking at the aerodynamics, one of the areas we wanted to focus on was the air leaving the impeller. What you find is that as the air leaves the impeller there are losses inherent in the design as the air comes away.

It is not just airflow. There is noise too. The diffuser converts some of the unused, or the useless dynamic power, into static, usable energy. Therefore, it regains some of the lost energy that you get from your electricity supply to the actual air power that is doing the work.

The diffuser does that by slowing down the velocity of the air leaving. We can do other things like straightening the air slightly, which improves the ‘throw’. Overall system improvements can mean that you could improve an application perhaps because they were getting a bit of recirculation. By throwing the air further you can get that improvement.

As a straight improvement on the impeller, we are seeing up to 27% improvement in energy saving for the same performance and the same duty.

However, actually we can improve an impeller's capability by a further 9% running at full speed purely by adding the AxiTop on, and so converting some of that energy.
Content continues after advertisements 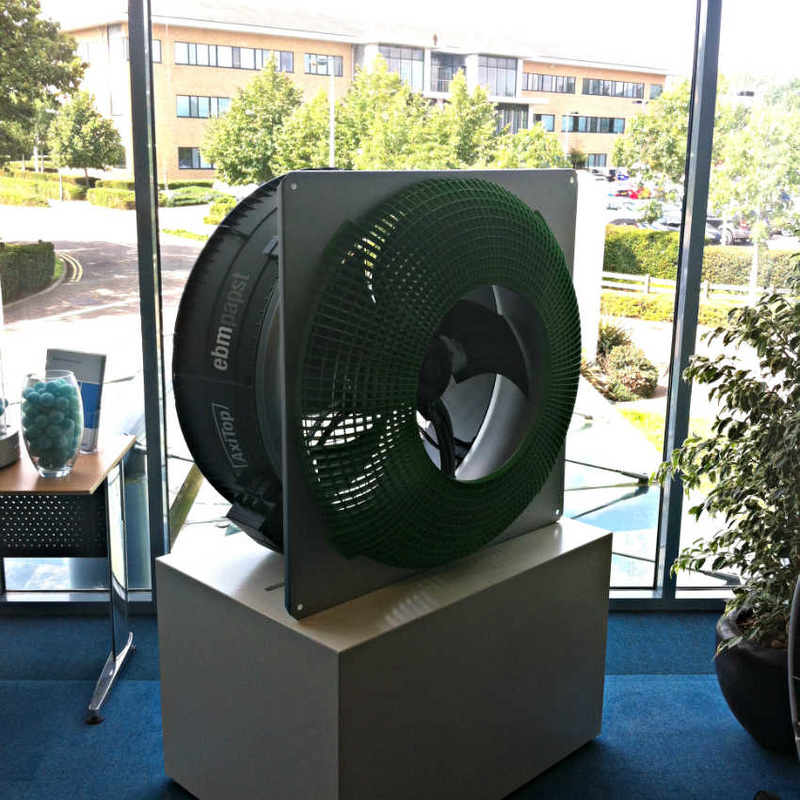 There is another factor, which is the noise. With an impeller, like an axial fan in a condenser or a chiller, there is a guard over the top. You need that there for protection. But, inherent in that design is the creation of some noise as the air is leaving the impeller, because it is quite close to impeller on the arm.  An added benefit of the AxiTop is that by moving the guard further away within the structure, the AxiTop allows you to improve the noise conditions as well. You get a significant noise reduction, up to 7.2 dBa.

You can improve the way the air leaves the impeller to improve the flow. And, we can also reduce the noise. But, of course, by turning the fan speed down you get extra performance, which is also part of that noise reduction. It is partially the guard and partially the reduction in speed.

We have seen from trials and retrofits significant improvements on overall performance of a condenser or a piece of kit that is on a roof. That can range from anything from 15% to 51% depending upon the application and the speed of the fan because some of these installations are only doing part-load.

You wouldn't expect to get full energy saving. But, we have seen 51% improvements in some cases purely because the installation was a bad installation. That has helped to stop or improve recirculation.

Have you have been surprised by the applications where the AxiTop is being used? Or, is it where you predicted?

Pretty much going where we expected. Typically, it is being used on the larger axial fans; we are looking at the 800 and 910 diameters. They are typically used on condensers, coolers and chillers, the refrigeration-type applications. That's where they are being used, but there is no reason why they can't be used on any other type of industrial application where this a requirement to improve efficiency. As long as, it is on an impeller that is used in the way that the AxiTop needs to be used.

Sometimes products can a while to be understood by customers and then bought. Are your customers quickly adopting it?

They are. As you say, initially people want to see it in action, see what it can do, take samples and go through processes. But, I would say that most of the OEMs we supply to now have tested and are purchasing AxiTop for their equipment. At ChillVenta at the end of last year, it was clear to see that a lot of the manufacturers, not just the UK manufacturers, were using AxiTop and were using it maybe as an option, but it was there on their portfolio as this extra capability. And, they were selling it alongside the energy efficiency EC technology.

So, yes, it has been adopted and people are using it and seeing the benefits of it in varying degrees. And even on retrofit upgrades installations it has been seen as a positive. There have big roll outs on various sites where they are adding this onto an existing EC impeller. It is already a fairly new piece of kit but then they are looking to adopt even further benefits and savings.

Have you had to use any different type of materials to make it? Or, does it purely come down to materials you have been using for a while but a different way you have gone about designing it?

It's the same materials we use on some of our impeller designs. We are always looking for new way of doing things, including moulding and shaping. It allows us to get the design and the shape more intricate than maybe metal one.

Our R&D team spend a lot of time designing new products on computers and can ‘iron out’ many of the ‘wrinkles’ in a product before making it. We also have our test labs where we can combine airflow and noise testing in one chamber. We listen to the tones and frequencies while it is being tested.

3D printing is a big thing with a lot of manufacturers now. We do a lot of prototyping on 3D printers. It is a quicker way to try an idea and try things out. We have 3D printing capabilities for all our works, plastics and designs.

It costs more to produce but the speed at which you can come up with something and test it. Even though it may be more fragile than a finished tooled product, it still allows you to test it and prove the aerodynamics and acoustics before you really start putting the money into proper tooling.

With the efficiencies you can gain, I imagine you can get some pretty good paybacks with the AxiTop diffuser?

You can. From the efficiency point of view, you can help them do the necessary calculations with onsite measurements, depending on the installation. If you are looking at the total system saving, it is not necessarily the energy saved on the fan. That might be quite a small part of the overall system.


Think of chiller, for instance. If you have a free cooling coil on a chiller, which some of our OEMs have, and you can produce another 9% more airflow than you did previously for the same size of impeller, the same size of equipment, then it means that the system can run better. You can ‘free cool’ a bit longer, be activated a degree or so earlier, in which case the compressors are not needed as much.

Therefore, the saving you get on those would be far outweigh the energy difference on the fan. Although it is a significant saving on the fan, switching the compressor off is even better. The knock-on system effect of the AxiTop Diffuser is important. Although we can talk about the capabilities of what we can save on the fan, sometimes it is the system saving that is the bigger pull.

We might be talking a few kilowatts of savings with the fan. But, if you are switching compressors off, you might be saving huge amounts of energy. Even if they are just switched off for an extra month per year. Or a few a year. It is significant over the course of a year on running a big chiller plant or several chillers.