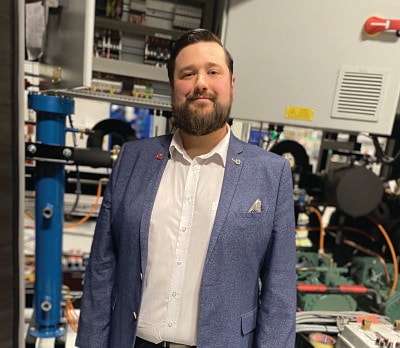 April 1 marked the beginning of a new chapter in the Arctic Circle story, as Mike Gittoes took the reins at the refrigeration company founded by his late father Eddie and mother Debbie 35 years ago. This is no tale of careful succession planning, though, as it has been an unconventional route to the role for the newly-appointed MD.

Arctic Circle was established by Eddie and Debbie Gittoes in 1985 and, although they worked together, the chances of it ever becoming a second-generation family business seemed remote. “I’m the youngest of three,’’ explained Mike. “My brother works at a university in Brighton and my sister trained as a forensic chemist. I went to university in Bristol and did a business degree and always wanted to set up my own company. I really had no intention of joining the family business and our parents were determined not to push us into it, we had to want to do it.

“I left university just as the recession hit and I really struggled to find a job. I went into catering because I had previous experience, re-trained as a chef and was having a great time, working in fine dining, delis and gastro-pubs. I worked my way up to head chef but then had problems with my back and was off work for about six months.

“Around the same time, myself and (now-wife) Amy moved back to Herefordshire because Dad’s health was failing and, in July 2013, we both volunteered to work part-time at Arctic Circle between jobs. Amy worked in sales and I was in purchasing… it was supposed to be a three-month thing over a busy summer!

“I was planning a change of career anyway and it went well. I moved from operations into manufacturing, stores and logistics. Amy is now Commercial Manager and I covered for her recently when she was on maternity leave.’’ (The latest addition to the family is Edwin “… after my Dad, who was known as Eddie but actually called Edwin.”)

Eddie Gittoes died in December 2013, by which time Debbie had taken on the role of Managing Director. She is now Chair of the company and will continue to be involved in an advisory capacity, in addition to handling special projects and driving environmental standards.

“So many people in this industry fall into it and then fall in love with it and carry on. That is the story for me. It has naturally evolved until I started to feel that I might be the best person to take this business forward.

“I was only working here for about six months before my Dad died. We had a lot of conversations and I think he was happy that I was there. Now my Mum is very happy because I think she has wanted someone to take the reins who can bring new energy and drive into the business.

“My Dad started out as an mechanical engineering apprentice and when he moved into refrigeration he found it frustrating because he believed there were better ways of doing things, but nobody was listening to him. So, with my mum, whose background was in accountancy, they decided to set up Arctic Circle, designing and assembling systems before the business became a full manufacturing operation.

“I don’t think any one person is going to replace my Dad as the driving force of this business, but with the team he built and the one we continue to build, we have got the skills between us. I think he’d be happy to see me taking this step.

“I’m passionate about refrigeration, and I understand it.  I am by no means an engineer like my Dad was, but I’ll definitely try to get there.’’

Hereford-based Arctic Circle currently has 60-plus employees, more than half on the shop floor building the bespoke packs for supermarkets which still form the core of the business, and has established an industry-wide reputation for its commitment to training and innovation.

Mike said: “We take on about 8-10 apprentices every year across the business and it’s something we really try to invest in. Of course, we lose some people but they usually leave for the right reasons and go out into the wider industry and take our standards with them.

“We train our apprentices as engineers first; they do mechanical and electrical before we teach them the fridge stuff, because my Dad always said that was the easy bit!

“It has really paid dividends because the majority of our management and strategic staff are ex- apprentices. Our Engineering Director, Chris Green, started as an apprentice at 16; he was definitely my Dad’s protege in terms of engineering.

“We are always trying to find the next best way of doing things and not accept what everyone else does as the way forward. We do that by driving energy efficiency and performance and trialling new technologies.’’

Arctic Circle was early to adopt natural refrigerants and has been producing transcritical CO2 systems for the retail sector since 2012, catering for stores ranging from convenience up to 10,000 sq ft, and some distribution centres.

Mike said: “If our competitors are moving manufacturing to Eastern Europe and other places, and if we still want to manufacture in the UK - which is something we are very passionate about - then we have to do things a bit differently and add more value. So, we listen to our customers and match their requirements.

“We are very happy to work with CO2 and it is still very much our bread and butter but we can never think it is the only option. One of the reasons we have our technology centre is so we can listen to our customers and trial the alternatives.’’

The Natural Refrigerant Training Centre began life as a joint venture with supermarket group Morrisons, who remain one of Arctic Circle’s main customers. “They obviously knew about the F-Gas regulations coming in and needed to know which way to go,’’ says Mike. “We basically built a mock supermarket with cabinets, cold rooms and freezers and produced lots of different packs and were able to give them real-life data to make those decisions.’’

The centre is now an in-house testing, training and R&D facility as the company looks to do things ‘the right way’. “We don’t want it to be ‘greenwash’ with the way the climate is now, it’s something that we live and breathe and we want to help encourage change,’’ says Mike. “Some of the decisions we make might mean less profit or less turnover, but If we don’t change now, we might not have a business in 10 years. Because we are a privately-owned business, perhaps we can take a more long-term view.

“We are also looking at standalone heat pumps for the industrial sector because decarbonising heating systems is one of the biggest challenges out there. It’s an area we really want to get into because so much of our experience is in heat transfer and heat recovery.’’

How much cooling does the world need?