ThermOzone recently returned to the site of a prior project in Lombard Street, London.Trevor Dann, director at ThermOzone explains 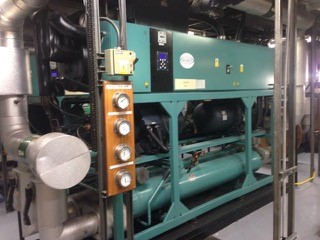 ThermOzone recently returned to the site of a prior project in Lombard Street, London.

In 2008, they upgraded four Carrier chillers, retrofitting the original piston compressors to screw compressors. And, they removed R22 in favour of direct replacement R422D, and updating the controls.

That upgrade achieved ~35% energy savings, and has provided so far 8 years reliable life extension to chillers originally installed in 1988. The latest upgrade has improved efficiency by a further 33% by retrofitting to Inverters and R134a.

​Partial load control of refrigeration compressors, requires reducing effective capacity by making some of the machine inactive - in a screw a slide valve is used to reduce effective volume, in piston compressors banks of cylinders are bypassed. However, as the compressor unloads, its efficiency reduces markedly.

Piston compressors on higher temperature applications are anyway very inefficient compared with the equivalent capacity screw compressor, and this accounted for the 35% achieved in 2008 when we converted to Screw compressors.

Applying an Inverter to a screw compressor can improve operating efficiency between 15 - 25%, according to the local conditions and load demand.
Content continues after advertisements

Most older water chillers still operate upon R407C as the direct derivative from R22, and upon equipment originally designed for R22 refrigerant.

However, R134a offers some key advantages for these chillers, with one notable disadvantage:

​Returning to the choice to use an inverter, when we apply this in conjunction with R134a upon a screw compressor we are no longer restricted to a 50 hz upper speed limit, indeed compressors we assign can be run to 70 hz, allowing us to re-achieve ~95% of the original cooling capacity upon R407C.

Most cooling system capacities are limited by the choice of compressor, with ~5% spare capacity in the evaporator. negating most of the effective capacity loss, e.g. the same as the compressor.

n practice retrofitting a water chiller with screw compressors is showing measurable improvements of ~27-33% against data model predictions of ~20-25%.

For most UK systems the ambient conditions experienced mean many chillers can attain lower load efficiency improvements above 20% for most of the year, with just a few weeks of day time running where the efficiency reduces.

Payback for these projects is typically 2-3 years, and has been recognised Nationally by the Carbon Trust as an effective means to improve equipment efficiency. Some buildings we have worked in have achieved overall rating improvements of 2 levels, e.g. G to E, or F to D.
​
When this is balanced against prior improvements of ~35% the overall efficiency reduction from Piston with R22 / R407C (or equivalent), final overall improvement can be ~55-60%. At one site we have audited results showing low load improvements with R134a and Inverters of 72%, with Summer time improvements of 55%.
Any savings that can be applied to the compressor can achieve substantial improvements for the clients.
Call ThermOzone on 0118 918 1400 or email:  [email protected]