CPD: HFC Phase-Down and the Introduction of R32 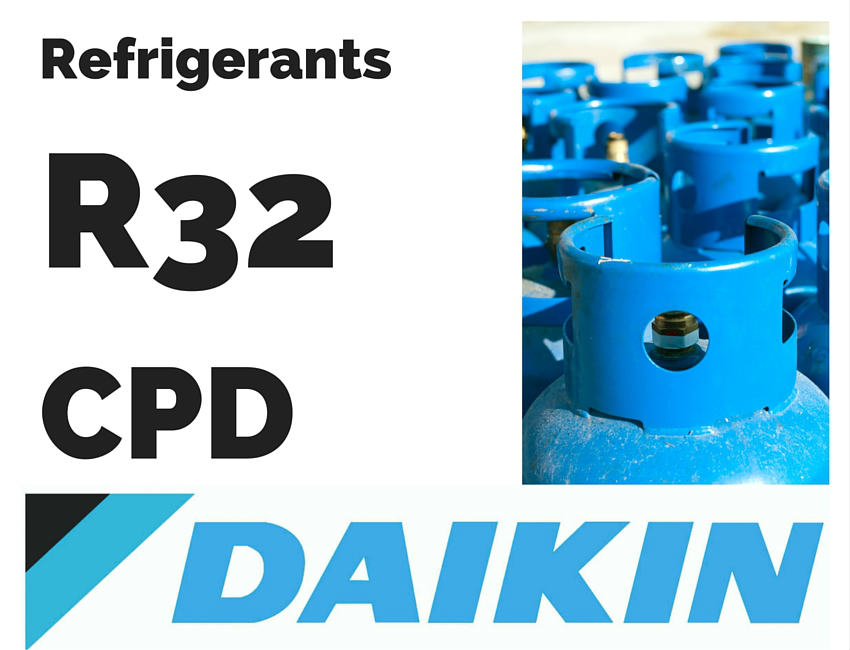 Daikin explores the implications of R32 refrigerant in this CPD article - take the questionnaire below in the form to gain CPD points.

For the HVAC-R industry, the next 15 years will see major changes, with the new legislation restricting and banning the use of refrigerant gases in certain applications.

Daikin’s preferred alternative to R410A for smaller direct expansion (DX) systems is R32 and the company is launching the first Split systems with a cooling capacity under 7kW using R32 in March 2015.

​Although highly energy efficient and the current refrigerant of choice, R410A has a high GWP of 2,088. While it will not be completely banned under the HFC phase-down, the new GWP limits, plus the fact that it represents 15% of all HFCs, means that we should start to review the use of R410A where possible.

There is a clear need to choose alternative refrigerant gases that are not only less harmful to the environment but that also meet future legislation, and are both safe and economical – in terms of existing system design and installation procedures as well as the cost of the gas itself.

Using new refrigerants that completely change system design means some systems installed over the next 5 to 10 years could become obsolete before the end of their working life. Manufacturers are acting now, introducing new products and developing ways of adapting existing systems to use the next generation refrigerants and extend their lifespan.

The changes will mean the entire industry has to work together so that manufacturers, designers, installers and end-users are well-informed and competent in designing, specifying, installing, maintaining and using these new systems.
Content continues after advertisements

Next-generation refrigerant gases – what needs to be considered

There are number of factors that need to be considered before choosing the next generation refrigerant:
1. Ozone Depletion Potential and Global Warming Potential

Ozone depletion potential must be zero, because of the global Montreal Protocol agreements and EU Ozone depleting regulations, and requires no further justification. But Global Warming Potential (GWP) is slightly more complicated as it must be considered from an entire Life Cycle Climate Performance (LCCP) perspective.

This method gives a much more accurate evaluation of the true global warming impact of a unit throughout its life cycle. Only looking to the GWP value is, therefore, not the correct way to assess refrigerant options as a unit with a “medium” GWP may have a lower total impact than a unit using a “low” GWP refrigerant.

Safety is paramount when choosing and installing refrigerants. It is important to understand that many factors affect safety, including product type, volume of refrigerant charge, room size, flammability and unit location.

It is as important to be efficient with natural resources as it is to be energy efficient and the environmental and economic parameters to “do more with fewer materials” should be adhered to. As such, refrigerant options must also be assessed on their potential for reuse. This same rule applies to the assessment of raw materials used to manufacture equipment. So, even when low efficiency refrigerant options could be improved by using more refrigerant in larger systems, this would be detrimental to the total “ecodesign” balance.

As it is predicted that 75% of future HFC emissions will originate from developing countries, it is important to find solutions that are affordable on a global scale.

Energy efficiency is obviously a key factor in refrigerant choice. Energy efficiency should be judged not only on the “seasonal efficiency” averaged over the cooling or heating season, but also the efficiency in peak load conditions (on very hot or very cold days).

Which gas will be adopted by the HVAC-R industry as the next-generation refrigerant has been debated for some time. The likely candidates are R32 (which makes up 50% of R410A), HFO blends, CO2 and hydrocarbons such as Propane and Butane. All have their own advantages and disadvantages and in reality, different refrigerants (and combinations of refrigerants) will be used at different times.

Comparing these alternatives to the common HFCs being used today is a good place to start because the system design and installation costs, as well as energy efficiency and safety, are understood. 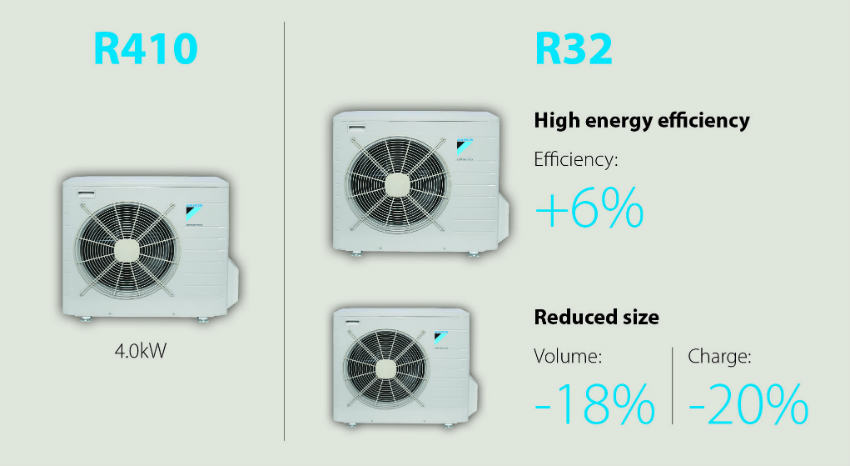 R32 is already used in HVAC equipment, as it makes up 50% of R410A. It has a global warming potential (GWP) of 675, which is one third that of R410A (2,044). It’s more energy efficient, resulting in a lower refrigerant charge and the potential to manufacture smaller units.

​As a single component refrigerant, it is also easier to reuse and recycle. Like many low GWP refrigerants, R32 is mildly flammable as designated in ISO 5149, requiring some new tools and procedures during installation.

Both R410A and R22 are rated as A1, which means they are neither toxic nor flammable. However like most low GWP HFCs, R32 is rated as A2L, which means there is low risk of accidents due to toxicity (A), and it is mildly flammable (2L) i.e. it requires more than 100g/m3 to burn (typically 300g) and has a burning velocity of less than 10cm/s.

Tests carried out by Daikin and Suwa ,Tokyo University of Science show that even if combustion of R32 occurs (at concentrations of more than 320g/m3), it is not explosive and the possibility of fire spreading is extremely low.

In fact, with residential air conditioners, even if the entire R32 charge were to leak within a room, its concentration would be so low that there would be no possibility of combustion. Furthermore, ignition does not usually occur from the type of electrical capacity used in domestic switches. And when performing soldering work during maintenance activity, a flame will blow out naturally and not continue to burn because the flow of leaking refrigerant is faster than the speed that transmits combustion.

As R32 is already part of R410A, the changes to installation procedures are relatively minor. In essence, installation is the same, the pipework is the same (using flared connections) and pressure testing and leak testing are the same. Of course, different tooling will be needed – which is now available –such as gauges, manifolds, leak detectors and flame proof  recovery systems.

The key issue is that installers will now be handling a mildly flammable gas, which means a new set of charging and recovery procedures need to be followed - but nothing that will present a major challenge. For example, an R32 system must be ventilated during charging and recovery, to prevent a build-up of refrigerant, which could then be ignited by a naked flame. Ordinarily, this is not an issue but if an outdoor unit is being installed inside a building, then a flame-proof fan should be used to ventilate the area. Note that this is already a requirement for installing systems with R410A, as the R32 and R410A gases could separate and, as a result, could be flammable.

Looking ahead to 2015 and beyond

The phase-down of HFCs will lead to significant change in the HVAC-R industry over the next 15 years. Installers, designers and end-users will have to adapt to using the next generation of refrigerant gases to reduce the environmental impact of air conditioning, heat pumps and refrigeration and to meet increasingly stringent legislation.

Installers need to ensure they are F-gas accredited, are fully aware of the new regulations coming in 2015 and are trained in handling R32 and installing any new systems. They should also keep up-to-date with the latest guidance from industry bodies such as REFCOM, ACRIB, IOR, F-Gas and DEFRA.

Daikin is also introducing installer training programmes covering the properties of the refrigerant and oils, cylinders, service and installation tools, as well as handling procedures, equipment installation and service.

The introduction of R32 will present a few challenges for industry, but Daikin is working hard to help ensure installers are ready, providing clear information on the new refrigerant and offering training in its safe handling. Daikin is also providing advice to consultants and end-users to help them make informed choices when designing and selecting HVAC-R systems over the next 10 to 15 years.

To complete the CPD

Simply study the module, then complete the questionnaire online below to receive your results and CPD certificate back by email. Modules will remain available at www.cibsejournal.com/cpd whilst the information they contain remains current.