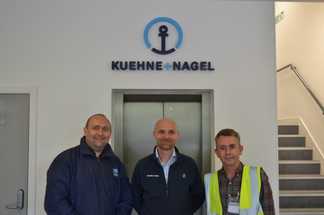 Satisfied Customer
​Leading research bodies agree that refurbishment of buildings has a lower environmental impact than new build.  Even so, it is still all too common for consultants and contractors to propose a comparatively straight-forward new build project over a complex refurbishment and still parade their ‘green’ credentials.

​​So, when a major retailer needed more capacity for its frozen products, it was presented with the usual two choices: build a new warehouse from scratch, or repurpose an existing building. Like all businesses facing these choices, the decision requires careful consideration and understanding of a number of factors.
These include capital cost, the location of the warehouse, the availability (together with project time scale), its cost of ownership, and of course its size current condition.

These are the choices that Stonegrove Refrigeration helped their customer, Kuehne + Nagel the global freight and logistics company) whose client is a major UK retailer, consider and then make.

Stonegrove’s team came up with a unique design for  Kuehne + Nagel  to keep costs as low as possible while providing an extremely efficient industrial refrigeration solution.  In fact, the solution was over 30% more cost effective for the client than building a new cold store.

Repurposing Buildings
Building a new distribution depot was going to be expensive, and with land in the Reading (Berkshire) area not readily available, it was also going to be time consuming both in terms of locating suitable land and construction programme.  So instead of building from new, Kuehne + Nagel   decided they wanted to repurpose an existing old distribution depot that contained Cold, Chilled, and Ambient storage areas.  This involved expanding the cold storage area into the other sections of the building which had previously been chilled and ambient.

The concept sounds simple, but was certainly not straight-forward.  It required a huge amount of forward thinking and planning.  Repurposing the building may have been attractive on paper but presented the project team with a number of issues to resolve.

The store needed a new heater mat throughout the new areas for floor protection.  Its previous underfloor heating only covered the freezer area.  This meant digging out 7,972m3 of concrete, and then laying the new heater-mat and floor.  This had to be carried out as quickly as possible to avoid any disruption to Kuehne + Nagel  ’s client.
Recycling Plant

Another efficiency made by Stonegrove Refrigeration, was reusing existing equipment already on site.  For example, Stonegrove reused four Coolers & Condenser coolers, and two existing GEA Grasso compressors packs (already 16 years old).  Even a set of existing booster fans were put to good use in the roof void, to aid circulation.
RDM Controls Collaboration

An important part of the repurposed cold store was its unique control system which Stonegrove Refrigeration designed closely with RDM.  The software was written by Stonegrove’s commissioning engineers (who also act as service engineers) so they were confident it is designed to control in a practical, functional and optimal manner; it was not left to a software engineer with little refrigeration knowledge.  All the 3rd party controls (Grasso and IGD leak Detection) are integrated within the RDM control system via Modbus, so it looks and acts from the outside like a single system.  This makes remote fault finding easier and also provides a single source data acquisition and report logging for the service department’s KPIs and client’s compliance records

The leak detection in the ceiling void at each valve station is supported by ducted positive ventilation.  This is designed to remove any ammonia refrigerant from the roof void in the event leakage from the refrigeration system.

Fail Safe Features
It goes without saying that the value of the produce contained within the cold store runs into £millions, and if one were to add disruption costs if the store cannot operate it is easy to understand why it is vital that measures need to be considered and taken to reduce the risk. With this very firmly in mind, Stonegrove were requested to design in a number of fail-safe features in addition to the usual standby plant capacity requested for such depots.

For example, there is a 10,000 litre water storage tank, complete with rainwater harvesting.  This supplies the evaporative condensers which enables the system to continue to operate for 24 hours should there be a mains water failure (something not unheard of in the geographical area).  Also, If the site electrical power goes down, there is sufficient generator back up to enable the plant to run at full load indefinitely.

Less defrosts
Another part of Stonegrove Refrigeration’s unique cold store solution is the ‘loading bay’ section.  It is not temperature controlled but has a dehumidification system dehumidifying the air in the loading bay.  The big advantage of the new loading bay for the client is the frost-free cold store.  This lends itself to far fewer defrosts for the store evaporators than would typically be expected for a store of this nature.

The final piece of decision jigsaw
Perhaps the greatest challenge of all was the project time scale.  Kuehne + Nagel  needed the complete project completed extremely quickly.  The project started in October 2015 and with temperature reduction commencing in March 2016.  Such a tight programme could not be achieved through a new build, and was extremely challenging to say the least even for a repurpose.

Repurposing Pays Off
Kuehne + Nagel  has a unique cold store in the UK, and not solely because of its high quality controls, dehumidified loading bay, underfloor heating, leak detection and new compressors.  This uniqueness stems from how Stonegrove Refrigeration managed to repurpose a building for its client, leading to the expansion of their cold store capacity in such a short time.  The cost of carrying out these works was dramatically lower than starting from new due in no small part to Stonegrove Refrigeration’s creative reusing and adaption of much of the existing plant.

Repurposing and recycling buildings and plant is an approach which more clients should consider if they want to increase their cold store capacity quickly without hitting their bank accounts too heavily and removing the environmental impact of new build.
Content continues after advertisements