The fundamental properties of refrigerants are overlooked by a lot of commissioning and diagnostic engineers. Superheat and subcooling values are essential to any refrigeration or air conditioning engineer as they generate a fine line between system reliability and effective, efficient operation. Too little suction superheat and there is a risk of liquid refrigerant entering a compressor, too much and system capacity and efficiency are reduced. Reduced refrigerant subcooling lowers the amount of energy that can be absorbed in the evaporator; too much can cause liquid to pass through the evaporator and enter the compressor along with reduced condenser capacity.

Azeotropic refrigerants are composed of a single refrigerant and only have only one boiling point. This means that it will condense and evaporate at the same temperature at any given pressure. Zeotropic refrigerants, however, have more than one boiling point; this is due to the refrigerant’s more complex chemical formula or composition. Let’s take, for example, R452A, a low global warming potential alternative for R404A and R507, and used in low-temperature refrigeration. It’s composition is 11 per cent R32, 59 per cent R125, 30 per cent R1234yf. These three refrigerants all have different properties for evaporating and condensing temperatures at any given pressure, so a thorough understanding of the bubble point and the dew point is important for system commissioning and diagnostics. 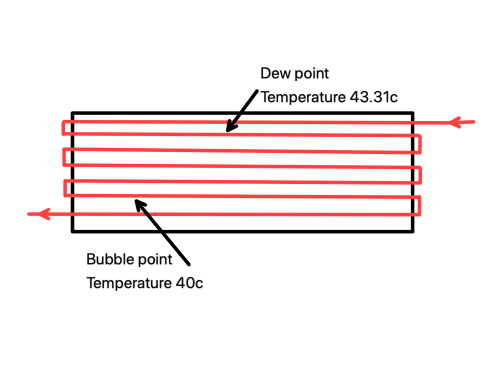 Refrigerant flow through a condenser, illustrating the points at which R452A refrigerant starts to condense and at which it is saturated liquid 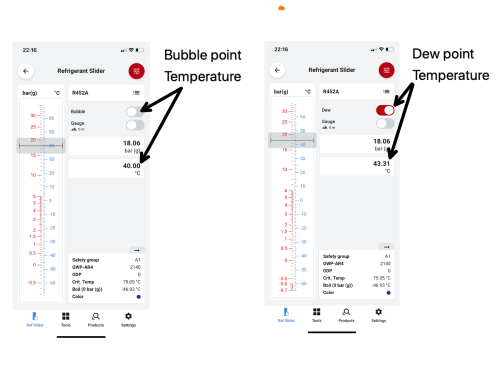 When calculating system sub-cooling values, the bubble point temperature on the discharge pressure side of the condenser is used, this temperature is subtracted away from the condenser outlet liquid line temperature. Further removal of energy from this point will subcool the refrigerant liquid. 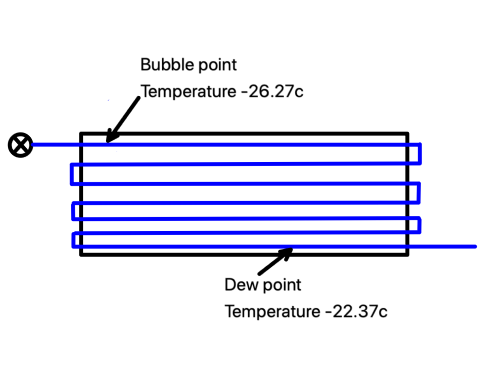 Refrigerant flow through an evaporator, illustrating the points at which R452A refrigerant starts to evaporate and at which it is completely vapour 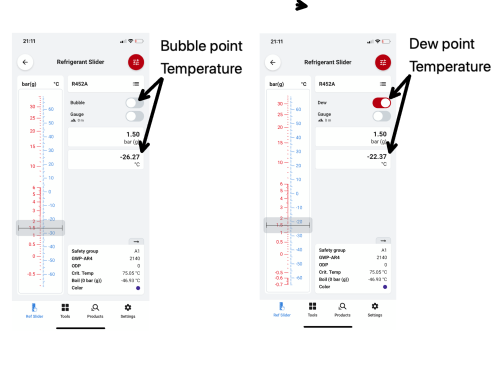 Let’s look at this on a refrigerant comparator, traditionally a handheld slider, but now much easier to use via apps such as the Danfoss Refrigerant Slider. If a system operates with suction pressure of 1.5 Barg, as it enters the evaporator, it starts to evaporate at a bubble point temperature of -26.27°C. Changing over to the dew point at the same system pressure, the last part of the refrigerant mixture liquid is evaporating at -22.37°C; this is the dew point.

It is important to remember that when we are calculating our superheat value at this point, it is our dew point temperature that we need to subtract from our evaporator outlet suction line temperature. The difference between the bubble point and dew point at this moment is our temperature glide.

With regards to the condenser side of our system, operating with a discharge pressure of 18.06 barg the bubble point is 40°C, and our dew point is 43.31°C.  Therefore, as the refrigerant enters the condenser, the first part of our refrigerant starts to condense (dew point). As further energy is rejected, the refrigerant continues to condense, and the bubble point is reached – the point at which the last vapour bubble condenses. It is important to remember that when we calculate our subcool value, our bubble point temperature is subtracted from our condenser outlet liquid line temperature.

Only by having a firm understanding of the properties of the refrigerants we use can engineers truly commission and diagnose the systems on which they are working. Automated system diagnostics are a great feature to bridge the skills gap that we currently have, but nothing can replace dedicated fundamental training.