All About Magnetic Refrigeration 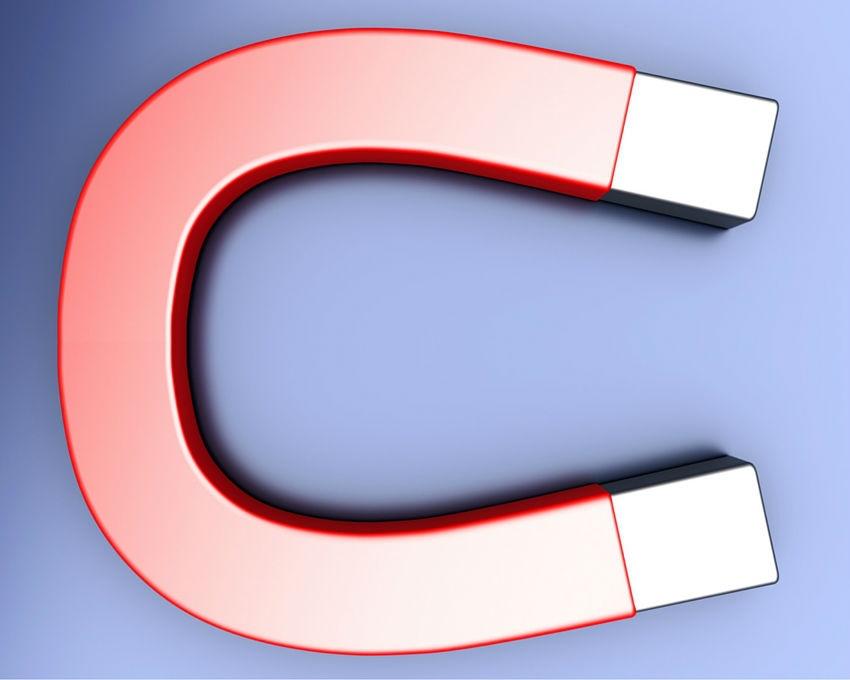 An Eye on the Future of Heating & Cooling Technologies.

In a series of articles SIRACH will review individual heating and cooling technologies and describe how they work, as well as who has been developing them. The article will also cover the potential benefits, applications and challenges in bringing to market. This month we will describe magnetic refrigeration.

​Magnetic refrigeration is an emerging, innovative and potential low carbon technology. Due to the increased concern about global warming and an ever increasing energy consumption, the interest in magnetic refrigeration as a new cooling technology competitive to conventional vapour compression cooling has grown considerably over the last 15 years.

The principle of magnetic refrigeration is based on a phenomenon known as magnetocaloric effect (MCE). This was discovered by Emil Warburg in 1881 and is related to the property of some exotic materials such as Gadolinium and Dysprosium that heat up when applying a magnetic field and cool down when the magnetic field is removed.

This is illustrated in the figure below. It can be seen from the figure that by operating the magnet in four steps, it is possible to reject heat and produce cooling. The energy (E =m.Cp.ΔT) generated during each magnetocaloric cycle depends on the variation of temperature ΔT, the mass of material (m) and its specific heat capacity (Cp). This effect is maximal at a specific temperature called the Curie temperature of the material. 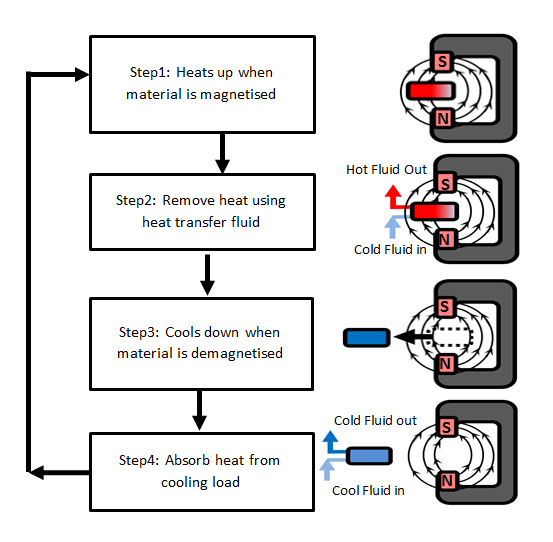 Schematics showing basic working principle of Magnetic Refrigeration
The main limitation of the magnetocaloric system shown in the figure is the relatively small temperature difference that can be achieved between the cold and hot source. A number of techniques have been used to increase this exchange such as Active Magnetic Regenerator Refrigeration (AMRR).

The principle of this cycle uses a heat transfer fluid in contact with the magnetocaloric materials (MMC) flowing from the cold side to the hot side when the MMC is heated (magnetised) and from the hot side to the cold side when the MMC is cooled down (demagnetised).
​
This progressively increases the temperature difference between the cold and hot source to about 20K making the system potentially suitable for commercial applications.
Content continues after advertisements

​There are various potential applications. First developments have been oriented to the commercial and domestic refrigeration markets for example display cases, beverage coolers, professional or domestic fridges etc.

However, magnetic cooling can also be completely adapted to other refrigeration applications such as air conditioning, including automotive, cryogenics or in heating applications (e.g heat pumps).
​The demand is likely to be driven by environmental regulations, since magnetic cooling does not use any refrigerant gas but only a water based coolant fluid. There are no direct CO2 emissions so it fully complies with all regulations such as F-gas in Europe or upcoming EPA regulations in the US.

In addition, the magnetocaloric cycle frequency being typically between 1 and 3 Hz, the rotation speed of the machine is slow and therefore very quiet compared to traditional compression systems.

According to recent research it has been predicted that MCE will have a significantly higher cooling efficiency (COP) than the present conventional methods, with a potential for a 30% energy saving.

Even though some product commercialization has been completed, there still remain some challenges:

​Although there is a lot of academic work by scientists & engineers from worldwide universities and research institutions the current market development is not fully mature. Some of the companies pushing the boundaries of this technology include Camfridge, currently involved in large EU research project on magnetic refrigeration http://elicit-project.eu/.

NEXTPAC (working on heat pump applications) and Cooltech, according to Cooltech after 3 years industrializing and testing its magnetic refrigeration system, Cooltech is now introducing a standard product specifically adapted to the commercial refrigeration market.

In addition other multinationals from around the world who are working on similar technologies include such as Whirlpool, Electrolux, Astronautics, GE-Appliances, Samsung, Erasteel, Sanden, Chubu, BASF, VAC etc.

On the 1st October the SIRACH Network visited Newcastle University and the Joseph Swan Centre for Energy Research. Delegates will saw the interdisciplinary research centre, known to deliver holistic, cutting-edge research and finding new ways of meeting the growing energy needs in an environmentally-friendly and sustainable way.

For more information or to be included on the SIRACH mailing list please register at www.sirach.org.uk  or email [email protected]